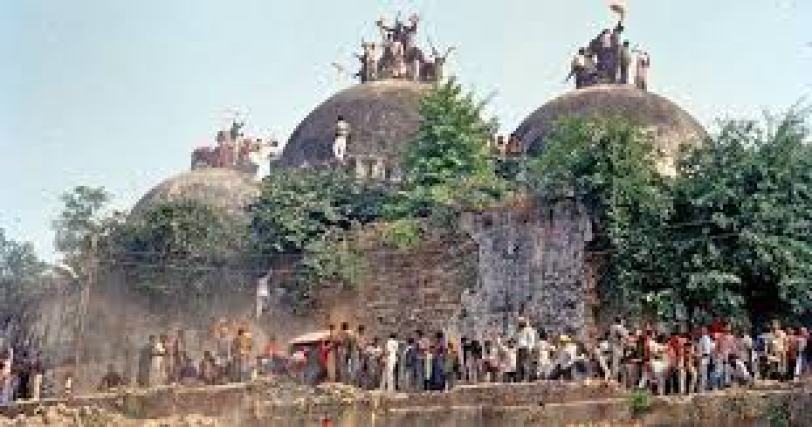 28 years after the 16th-century Babri mosque was raise by a mob in Ayodhya. A special CBI court in Lucknow delivered its verdict.   In a 2000-page order today the special CBI court of Lucknow delivered a judgement on a very heated topic of Babri mosque demolition case.  In a big development CBI court today acquitted all the 32 accused in the matter that included stalwarts and veteran BJP leaders like Uma Bharti, L.K. Advani and Murli Manohar Joshi. What were they accused of? They were accused of criminal conspiracy and promoting enmity.

The court’s obiter dicta were that the demolition was not a preplanned, premeditated and that the evidence against the accused not strong enough. The Hon’ble Court also observed that the audio and video evidence that is produced by CBI did not establish the conspiracy charges against the accused, the further court said that the video tap presented by CBI is a tempered one. The court also observed that the leaders that were present at him during the demolition were trying to stop the mob and not inside them in that stones were pelted and it started from the behind the disputed structure. Judge S.K. Yadav said that some of the leaders wanted to keep the structure safe because it had statues of Hindu deities. In a significant verdict, the court accepted that it was due to a sudden provocation and not a pre-planned conspiracy in any way.

The verdict pronounced today has a couple of facets to the judgement as  Judge was categorically saying that the one evidence was not enough, second, before he pronounced the judgement he said that event was not pre-planned, which means that the demolition of Babri mosque not planed so there is no premeditated conspiracy which is the main charge on the accused in the instant case. But it is more complicated than that, as it can be challenged in the High Court and Supreme Court of India. This judgement is succeeded by a bigger judgement in which the disputed structure was awarded to Hindus which pave the way for construction of Ram temple and a separate land has been allocated to Muslim community where they can build their mosque.

Now, in terms of restitution, resolution and a political issue coming to end, it is going to take its own time. This whole moment which propelled BJP to power in 1996 and Atal Vihari Bajpayee went on becoming Prime Minister for 13 days in his first run, so this was not only about the land which has a religious residence. The eyes were on the verdict is for some simple reason that this whole movement of Ayodhya issue has created the new political constituency in India as it remoulded the Indian politics and it is because of this moment today BJP has become the biggest and most important political party, congress completely marginalized and reduced itself in many folds. The verdict is going to have its impact but the debate will continue because ultimately the structure come down and there were people there. There was assurance on part of Kalyan Singh then the Chief Minister of Uttar Pradesh to the then the Prime Minister of India Narsimha Rao that he would try his best to ensure that structure does not come down and it did come down and then state government was dismissed.

In India, we have reminded time and again as to how the wait for justice is never-ending and how the courts have failed the country’s citizen, how this reason cited time and again to justify taking matters into one’s own hands. This is the reason that restores India’s faith in the erosion of the judicial system. 28 years later as court acquitted all the accused then who demolished the mosque? According to court, the mosque was demolished by the “anti-social elements.”  The demolition of Babri Mosque was preceded by Rath Yatra, fiery speeches and chariot processions. What followed led to the death of 3000 people, riots broke out in various parts of India. The episode changed the Indian Political scenario forever, it splits the people of India and political parties in three different groups.

Today all three sides have lost as has the victory is of the verdict, not justice. Because 28 years, 351 witnesses and 600 documents and multiple twists in this case latter it has been decided that no one razed the mosque. It took more than 2 decades for the order to come out in the instant case, the court initially had framed charges against 49 accused, 17 of them died in the process.  The limelight point that shall be noted here is that the decision has come after the decision of country’s biggest court in the matter of the disputed site at Ayodhya.

The larger question here is that it is not a disputed fact or there is not an iota of doubt that the Babri Mosque was demolished, there were people who demolished it. The crowd was charged to a point by a people who had mobilized this opinion in past 12 years that they went and demolish the structure, so any legal decision will not be able to end this political controversy because it’s not a legal matter anymore the decision on Babri Masjid was on the issue of faith. Now, the court says that the people who were important players were not at all responsible in any way will create more controversies in social divisions within the society. Well, it is a time to rejoice and it’s a time for relief for BJP as their senior leaders have been acquitted because of insufficient evidence on record. But the larger question still remains unanswered why such mobilization took place? Who were the leaders who were mobilizing it? Can a crowd accommodate and organize itself on its own and break the structure? Wasn’t there a proper campaign? Wasn’t it this an ideological campaign? This verdict may have ended it legally or maybe it will end in High Court or Supreme Court but it raises a pertinent and litmus question and it is not about the BJP veteran leaders but it is about the fact that the structure was broke down but no one has been blamed for it not one person blamed for being the person who was responsible for the structure to be brought down because Supreme Court in itself in verdict had said that bringing down the structure was an illegal and egregious violation of Rule of Law. The bigger question is that there is no accountability as the verdict has come, its wisdom and intention of the verdict cannot be challenger but it will raise question there will be controversy over it.

Just after the verdict, many several communal sensitive areas in the state of Uttar Pradesh have been put on high alert. To control the law and order there shall be an assurance of proper law and order to avoid any type of clash. The bigger issue here is the sort of effect is going to have on a particular social constituency in this country and the larger effort on part of the important politician is required if the part is settled legally then it must end politically also as it is a divisive issue.