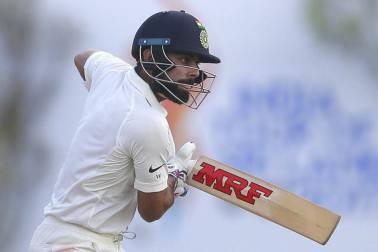 After letting India win comfortably in the first test Sri Lanka seems to have decided to make India shine by offering another big score in the first innings in the range of  600-700 runs to stronger India. India cannot be challenged by Sri Lanka in any manner, so Indian teams have to be promoted in cricket.

In the first test in the first innings, SL bowlers offered exactly 600 runs, enough for Indian batboys for India to win the match comfortably In the second test also SL bowlers now are f offering big score to India to ensure their another “historic” win.

SL bowlers the make sure the run-rate of SL batboys don’t fall sharply and keep adding more 4s so that India is steady.

IN the first test, Kohli could not get his “fabulous” 100 in the first innings, so SL bowlers offered him a special 100 in quick runs in the second innings.

In the ongoing second test also, Kohli fell without this “historic” 100, and he is damn sure Sly bowlers would offer him 100 in the second innings as in the first test.

Kohli got Padmashri award last year, and this year BCCI and corporate sponsors want Pujara to be offered a national award as he is managing 100s. So, Kohli is not at all worried about his quick fall, leaving Pujara at the crease. He wanted to show Pujara deserves the national award this year from Modi.

That is cricket which controls Indian governments, both federal and regional.

Test cricket is meant to offer big 100s to bat boys in both innings and if one of them could get one 100, then the second innings will take care of it as the opponent team is sure to help the other team as well for return favors for their bat boys.

UN must declare test cricket bogus, and all records fake too.

If Modi and Sirisena decide to share 100s, who will be offered more 100s and will they also get national awards? Obviously- that would be Modi!

In the first test, Sri Lankan bowlers toil in the hot sun to offer big score to India with a couple of 100s, the 50s and bat boys Dhawan had almost reached the “historic’ 200, but with a short of a couple of runs, he fell. India thinks Lankans have tried to be over smart with India and for which Lanka would have to pay. But Lankans would argue that they have done no harm to Indian bat boys, and they just threw the ball to Dhawan for him to choose the shot- 4 or 6 but he fell.  In the second innings also, Lankans toiled on the field to give a quick 100 to Indian captain Kohli mostly in 4s and expected India to return the hard favors they received from Lankans. But India plays mischief and removes FDM Karunaratne at 98 runs, thereby making him cry loud, and even President Sirisena would have felt the hard pinch of Indians. India did not show any mercy.  So now Lankans are being punished for offering big score for the visitors.

As it stands, if they want a full 100 from India, Lankans must offer 300 runs to a couple of bat boys plus the usual 50s. SL batboys have not got a 100 in this series, though they are kind to Indian batboys.
Lankans are taking a significant risk in offering good marks to Lankan batboys, but India just wants to win and shine. They have got some good bowlers but the batboys are just as useless as in other teams, and they can hit only when their bowlers are weak or offer too many runs.

The cricket regimes or their judiciaries won’t do anything to other bat boys and cricket board. But the UU has a duty before the world in exposing match fixing in cricket and ban the test cricket once for all.