Jinnah: India-Partition-Independence is a book written by Jaswant Singh 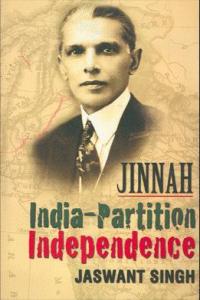 After writing the book, this high-ranking politician of the Hindu-revivalist Bharatiya Janata Party (BJP) created controversy both within his party and throughout India.  Between 1998 and 2004, while in the Union cabinet, Singh was in charge of External Affairs, Defence and the Finance Ministry of India.

Following the 2004 elections, the BJP was the opposition party with Jaswant Singh as its leader. During this period he began his five-year-long research that took shape in this book. The book was banned in Gujarat after it was initially published by Rupa Publishers. It was later launched second time by Oxford University Press Pakistan in April 2010.

The book analyzed Jinnah’s public life and his political journey from being the ‘ambassador of Hindu-Muslim unity’ to the leader of the All India Muslim League, the Governor General of Pakistan later elevated to the Quaid-i-Azam of Pakistan.

The book raises a question whether the partitioning of India in 1947 was inevitable and endeavors to explain the roles Mohammad Ali Jinnah, Jawaharlal Nehru, Sardar Vallabhbhai Patel, Mahatma Gandhi and Viceroy Mountbatten, just to name a few. They all play into an unfolding tragedy that scarred the sub-continent for a long time to come. Jaswant Singh questions the theory of Muslims being a separate nation traces its evolution, and Jinnah’s persistent utilization of it to have a Muslim voice in Indian politics which the demographics would not give them. He focused on the need for a correction in the Indian and Pakistani historiography which currently purports Jinnah as the villain of partition.

Jaswant Singh was expelled from the BJP, although he rejoined on the 24th of June 2010 after the senior BJP leader L. K. Advani took the initiative to bring him back.

In the first chapter, Singh takes the reader back in time to the initial contact between India and Islam and describes how Muslims came to be part of the country. The author took a cursory look at the history of Islam and Muslims in India. He argues that even though Islam is not an indigenous part of India, it is an inseparable layer of its foundation. So how can it be that the Muslims constitute a separate nation and, “why in India alone?” asks Singh (p. 11). Hence, he states his views on the Two-Nation Theory, rejecting it and supporting the unity of the Indian nation enriched by its religious diversity. The arguments presented are well structured and free of any overt religious ideology. However, they are obviously still framed within the discourse of religious categories being the sole foundation of understanding Indian society and politics. Nevertheless, this apparently objective approach convinces the reader that Singh’s inquiry is worth being noted and any previous doubts are dispersed or at least softened.

In the second chapter, he leaps through time to tracing Jinnah’s emergence as a barrister and nationalist in pre-partition India of the 1920s. Chapters 3-10 relate a chronological account of the events leading up to 1947 and a little beyond, the Hindu-Muslim relation being a recurring theme alongside Jinnah’s political evolution. He covers the key developments such as the Lucknow Pact of 1916,

the Communal Award, the elections in 1937, the Lahore Resolution of 1940, the Cripps Mission Plan of 1942, the Cabinet Mission Plan, the elections in 1946 and the 3rd June Statement of 1947. His description is not strictly chronological however as he efficiently uses backdrops and foreshadows, also creating a sense of suspense to engage the reader. On page 106 the author describes Jinnah’s success in uniting Hindus and Muslims in the adoption of the Lucknow Pact in 1916 but already points to what lies ahead. This was the very same Jinnah who later got denounced as the destroyer of Hindu-Muslim unity.

Though the book attempts to analyze events leading to the partition, Singh delves into a series of contentious issues. His probe into the thesis of “Muslims as a separate nation” is as provocative as his questioning of the rationale for the creation of Pakistan.

An inquiry into Jinnah’s journey according to Singh is central to the question of why partition “robbed” the region of “peace.” After exhausting this journey from Jenabhai to Jinnah, the author remains perplexed and in his own words expresses an “inability to understand what, after all, did partition achieve?”

Singh’s effort to revisit a painful past in the subcontinent’s heroic struggle to wrest itself free from the grip of the British Empire is brave indeed. By subjecting many revered personalities of that era such as Maulana Abul Kalam Azad, Mahatma Gandhi, Jawaharlal Nehru, Sarojini Naidu and Sardar Patel to fresh scrutiny, the author has ensured that controversy on his subject will rage on.

While in India, Jinnah is demonized, as Singh points out, in Pakistan, he is glorified for fighting for a separate homeland for Muslims. No one, it seems, has grasped the fact that Jinnah stood for a real federation and that he wanted rights for the largest minority in India, not to break it up. He wanted joint rule by the Congress and the Muslim League.

And while they cannot undo partition, they can surely try and rebuild the nation through the lens that Jinnah saw it as – a free, educated and perfectly safe country for people of all religions, castes, and creeds. Incidentally, the RSS has already refuted Mr. Singh’s portrayal of Jinnah.

The partition of India, 1947, some call it vivisection as Gandhi had, has without doubt been the most wounding trauma of the twentieth century. It has seared the psyche of four plus generations of this subcontinent. Why did this partition take place at all? Who was/is responsible – Jinnah? The Congress party? Or the British? Jaswant Singh attempts to find an answer, his answer, for there can perhaps not be a definitive answer, yet the author searches. Jinnah’s political journey began as ‘an ambassador of Hindu-Muslim Unity’ (Gopal Krishna Gokhale), yet ended with his becoming the ‘sole spokesman’ of Muslims in India; the creator of Pakistan, The Quaid-e-Azam: How and why did this transformation take place?

No Indian or Pakistani politician/Member of Parliament has ventured an analytical, political biography of Quaid-e-Azam Mohammad Ali Jinnah, about whom views necessarily get divided as being either Hagiographical or additional demonology. The book attempts an objective evaluation. Jaswant Singh’s experience as a minister responsible for the conduct of India’s foreign policy, managing the country’s defence (concurrently), had been uniformly challenging (Lahore Peace process; betrayed at Kargil; Kandahar; the Agra Peace Summit; the attack on Jammu and Kashmir Assembly and the Indian Parliament; coercive diplomacy of 2002; the peace overtures reinitiated in April 2003).

He asks where and when did this questionable thesis of ‘Muslims as a separate nation’ first originate and lead the Indian sub-continent to? And where did it drag Pakistan too? Why then a Bangladesh? Also what now of Pakistan? Where is it headed? This book is special; it stands apart, for it is authored by a practitioner of policy, an innovator of policies in search of definitive answers. Those burning ‘whys’ of the last sixty-two years, which bedevil us still. Jaswant Singh believes that for the return of lasting peace in South Asia there is no alternative but to first understand what made it ‘abandon’ us in the first place. Until we do that, a minimum, a must, we will never be able to persuade peace to return.

One of the things I liked a lot about this book is its opinion on Lord Mountbatten. Various writers, especially Dominique Lapierre and Larry Collins in Freedom at Midnight, have taken a very benevolent view of Mountbatten and his role in the partition of India. Jaswant Singh (rightly in my view) exposes Mountbatten to be a showman who was thoughtless and incompetent and who hastily rushed through partition which resulted in the deaths of over a million Indians.

Jaswant Singh’s writing is straightforward and to the point. At times, there are literary flourishes, which read rather well. However, because it is so lengthy and because it does not have a specific focus, I doubt if the BJP leadership which expelled Jaswant Singh for this book, actually read it from cover to cover!

The author assumes that the reader is well acquainted with the official Indian historiography. He tries to reach out to the Indian political elite with his appeal for more understanding in political negotiations. The book is therefore recommendable to those readers who have some basic knowledge on the topic. Readers looking for an introduction to the subject may read it but will need to read other books alongside to be able to understand some of Singh’s arguments. Why he chose to write about Jinnah, India, Partition, and Independence, is not answered in the book. Does he have ulterior motives? In an interview with Karan Tharpar, he says, “I didn’t write this book as a BJP parliamentarian or leader, which I am not. I wrote this book as an Indian” and attempted to be as objective as a person can be. This corresponds with the impression I gained from his reflected and even-handed account. In the end, Singh is not that far apart from Jinnah since Jinnah was and Singh still is committed to India’s development and success even though they represent different political opinions. Jaswant Singh has published an account of the events preceding partition that both Indians and Pakistanis can accept.