Is Sri Lanka’s Foreign Policy of non-alignment of any relevance to the country today? 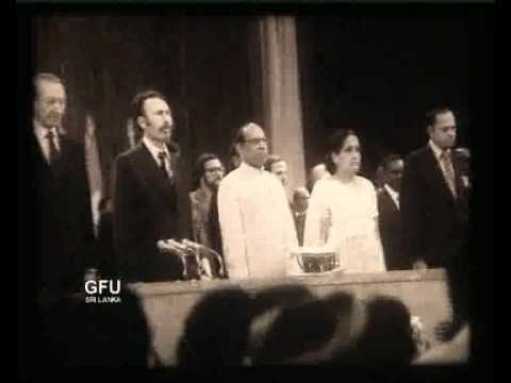 It is not disputed that S.W.R.D Bandaranaike was the founding father of the non-aligned foreign policy of Sri Lanka when he became Prime Minister in 1956. This was when the Second World War was over, and the world turned in to a tight bi-polar system dominated by two main power blocs: US-led bloc emanating liberal democratic ideals and USSR emanating communist political ideals. Countries of the periphery had to decide to either join one of these two power blocs or not align themselves with any.
Prime Minister Bandaranaike included in his foreign policy objectives to engage in preventive diplomacy to bridge the gap between the two power blocs, opposition to all forms of colonialism and support to national liberation movements. The national interest at the time was to gain full independence, and for this purpose, he abrogated the Defence Agreement signed between the British and Ceylonese and ordered the British to vacate the military bases in Trincomalee and Katunayake.

The concept of Non-Alignment.

Till 1961 different leaders of the non-aligned movement had different interpretations of the concept and the West found it somewhat ambiguous and in-comprehensive. At the First non-aligned conference held in Belgrade in September 1961, a proper definition was laid down as read by Mrs. Sirimao Bandaranayake. For a country to be non- aligned following Criteria must be satisfied:

“(i) independent policy based on peaceful co-existence and non-alignment
(ii) it should have consistently supported movements for national independence
(iii) it should not be a member of multilateral military alliances
(iv) if it had conceded military bases, these concessions should not have been made in the context of great power conflicts
(v) If it were a member of a bilateral or regional defense agreement, this should not be in the context of great power conflicts

The purpose of establishing the non-aligned movement was not to join the cold war rivals but to become a positive form in the international community along the principles mentioned above. What the countries of the non-aligned movement had in common was that they belonged to the commonwealth and were once colonized by a superpower. They received independence on a compromise achieved for their contribution to the support of the colonizer during the world wars. Today there is no cold war between Russia and the US, but superpower tensions exist in other forms.

Great power conflicts of today such as the South China Sea crisis, Ukraine, and Syrian Crisis are some examples. In all these crises countries that were historical rivals: the USA and Russia and regional hegemons such as China are involved. These countries as reported by BBC are some of the “Geographically large, economically powerful, and militarily significant nations in modern history.”

Sri Lanka, on the other hand, is a small power which only recently became a middle-income country. Powerful countries do manifest themselves through soft power approaches to influence small states for their power agendas. This statement has to be understood in light of historical and recent events and the geopolitical significance of Sri Lanka as an Island in the Indian Ocean.

During the days of the Defence and External affairs Agreement of 1948, the British made references to the strategic location of the Trincomalee port as quintessential to their maritime activities in the Indian Ocean as it is located along the major sea lanes. The Maritime Agreement with USSR in February 1962 during the Sirimao Bandaranaike administration was along the same lines. During the J.R Jayewardene and Ranasinghe Premadasa administration, Sri Lanka was chosen to build the Voice of America transmitting which was suspected of being used for intelligence gathering purposes and electronic surveillance of the Indian Ocean.

During the Mahinda Rajapaksa regime, Chinese aid to the country in large-scale infrastructure development garnered much controversy. Robert Kaplan opines that China is playing its part in the great power rivalry in the Indian Ocean by making significant contributions to ports surrounding India – Hambantota, Chittagong, Karachi, Gwadar etcetera. Adding to this, the joint statement between Sri Lanka and Japan on maritime issues makes prominent references to Sri Lanka’s strategic location. During the visit of Prime Minister Shinzo Abe, a Chinese warship and submarine was docked at the Colombo port. These incidents point out to great power rivalry concerns.

Are we to remain non-aligned or redefine what it means to be ‘non-aligned’?

Sri Lanka very recently signed an MOU with Google which implies that geopolitical concerns are very much part of the US foreign policy agenda. Google is committed to providing universal internet to Sri Lanka through drone technology which is considered one of the unorthodox tools used to further American interests in Sri Lanka; a historical parallel to which is the Voice of America transmitting station.  The US has not overlooked the value of Sri Lanka as pivotal to furthering its interests in the Indian Ocean. Chinese involvement in the Island is an even more significant concern with the rise of China to a position of dominance in the Indian Ocean.

The Indian Ocean itself is becoming a geopolitically and geo-economically significant region; maritime crime has called for hard power approaches and collaborations with regional navies. Thus the Third criterion has to be reviewed due to modern day demands and challenges. If multi-lateral military alliances are governed in a rules-based order, proclivity for contention could be curbed. The Chinese funded large-scale infrastructural projects within the Belt Road Initiative (Including the Chinese funded Sri Lankan Ports) are now subjected to skepticism as ‘pivots’ for future military bases. The Fourth and fifth criteria of the non-alignment policy has to be understood not as an impediment to Sri Lanka from economic, political, diplomatic or other gain but a ‘pact’ based on mutual agreement along the lines of peace: and emanating a sense of ethical conduct to resort to peace in the case of contention.

Thus the validity of remaining non-aligned today has not been more critical to protect the national interests of the country which is best achieved by strengthening the relationships with our immediate neighbours: India, Pakistan, Indonesia, and the other countries of the non-aligned movement that Sri Lanka once had non-aggression pacts with. This calls for a redefining of what ‘non-aligned’ means: that Sri Lanka should not isolate itself in an increasingly globalized world. Instead Sri Lanka should engage with extra-regional powers, capitalize from the gains by strategically balancing geopolitical interests.
Sri Lanka has shown signs of non-alignment in the South China Sea dispute between China and Philippines in a statement issued on 10th May 2014 that “disputes relating to the South China Sea have to be settled bilaterally through negotiations by the concerned parties” whereby Sri Lanka does not favor any country and leaves it to the results of international arbitration, an action commendable along the lines of non-alignment.