Is Sheikh Hasina’s faulty government hedging or seeking regime alignment over the Rohingya genocide in Myanmar? 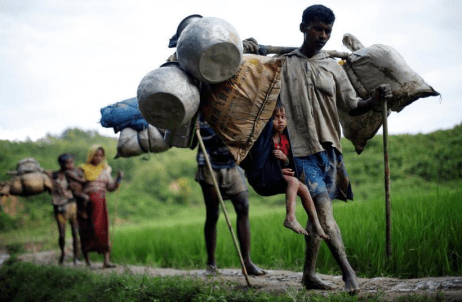 The United Nations has described Rohingya Muslims as the most prosecuted minority community in the world. Worldwide condemnation of the Myanmar regime over the brutal atrocities committed by the military in Myanmar has led to calls for the regime to be tried for initiating one of the most atrocious crimes against humanity in recent history.

However, close to home or within the region, the response seems to be rather calculated. Mass murder, killings, rape within the Rakhine State by the Myanmar military seem to be falling short of condemnation of this violent terror against Rohingya Muslims.

The disgraceful Nobel laureate for peace, Aung San Suu Kyi has wiped out her dignity and values with her unbridled lust for political office by failing to condemn one of the worst mass killings in recent times. Rather she has shown strong support for the actions taken by the Burmese military.

However, on the other side of the Rakhine border, the highly flawed Prime Minister of Bangladesh, Sheikh Hasina has equally failed to act on any human instinct or political leadership over this grave crisis and plight of the Rohingya community.

For the first four weeks, Sheikh Hasina failed to condemn the killings in Rakhine while other foreign dignitaries had led to address the matter, some of whom even visited Bangladesh to make their way to the border in the south of Bangladesh, near Cox’s Bazar. Sheikh Hasina meanwhile remained silent and shaky over giving any leadership to resolving the crisis.

Thus Bangladesh lost the opportunity to be a lead state actor in mediating to resolve one of the worst oppressions in modern history. For observers in the region, this is not a total surprise mainly because Sheikh Hasina herself lacks an electoral mandate at home, her faulty government reigns with an illegitimate parliament where 154 parliamentary seats (a parliamentary majority) were unelected in the last general elections in 2014.

Since then Sheikh Hasina has largely been dependent on projecting her strong relations with neighbor India: A rather paradoxical relation between an undemocratic government in Bangladesh and one elected by the largest democratic mandate in the world!

The people of Bangladesh perceive Bangladesh’s relations in the first three years following the controversial national elections of 2014 under Sheikh Hasina as a strong step towards regime alignment with India. India took the bigger risk as a legitimate democracy for temporarily bailing out the undemocratic and illegitimate regime of Sheikh Hasina.

Sheikh Hasina’s government, on the other hand, took the name of India when presiding over all their crimes in Bangladesh. Although the last eight years have seen heightened relations between India and Bangladesh, where India has been perceived as mainly supporting regime security in Bangladesh.

This growing perception has been put to some rest in the recent past by the Indian High Commissioner in Dhaka, Harsh Shringla, when he outlined the government of India’s position was to strengthen its relations with the people of Bangladesh and his country wants the next national elections in Bangladesh to be free and fair and said that India will stand beside Bangladesh to deal with the refugee crisis. This was well received by stakeholders in Bangladesh.

Both China and India are important development partners for Bangladesh; it will be inappropriate and impractical for any legitimate government in Bangladesh to think otherwise. However, in the case of the highly faulty government of Sheikh Hasina, it attempts to cultivate fallback positions between dealing with Western democracies and institutions and our important regional partners India and China by hedging around on the back of the Rohingya catastrophe.

On the one hand, it was hesitant and slow to respond to calls from the global democratic community and international organisations to open up its borders to support the fleeing Rohingya refugees early on and, on the other hand, it totally fails in providing firm leadership from where regional development partners like China and India can draw confidence to address the matter.
Given the fact Sheikh Hasina’s government has grossly violated human rights at home, it is no surprise to see that it was hesitant in exercising humanity in providing a safe place for the Rohingya refugees and condemning these atrocities from the beginning.

As a government without the people’s mandate, it lacked confidence in forging national unity domestically and instead was looking to China and India to resolve its problems without initiating any appropriate diplomatic measures with either country.

In recent years the Sheikh Hasina regime has initiated a dual hedging approach in its relations with both India and China whereby it is failing to negotiate terms in crucial policy areas around security and over investment and the Rohingya refugee crisis exposes the trust deficit that exists in Sheikh Hasina’s incoherent regional foreign policy.
It has exhausted its so-called reputation as a champion of tackling international terror by trying to crush her democratic opposition through state-sponsored terror while more terrorist attacks have taken place and more lives have been lost from terrorist attacks under the current Sheikh Hasina government than under any other previous government in Bangladesh. More custodial killings of “terror suspects” take place without any transparent trial to bring the perpetrators of such heinous crimes to justice.

The rapid influx of Rohingya refugees across our borders is a clear breach of Bangladesh’s national security by the government of Myanmar. Sheikh Hasina’s government failed to take a moral or strong security position at the outset of the crisis; instead it tried to classify the prosecuted Rohingya minority as terrorists thus trying to use the international security agenda as a get out clause for keeping her distance from this grave tragedy–only to return with empathy a month later when mass protests appeared with cross-political and people’s support across Bangladesh.
However, Sheikh Hasina’s dithering over addressing the Rohingya crisis as a direct infringement on Bangladesh’s sovereignty by the government of Myanmar and failing to give leadership early on the matter by calling for regional cooperation and convincing important development partners like China and India to mediate discussions with Myanmar have deepened problems for the country.
Given the democratic deficit of Sheikh Hasina’s government and the illegitimacy of the parliament in Bangladesh and also in the absence of a national security council, Sheikh Hasina needs to convene an urgent national dialogue on the matter with all political leaders in the country. The Bangladesh Nationalist Party (BNP) as the nation’s main opposition party will extend its fullest cooperation.

Sheikh Hasina’s flawed government with immediate effect needs to form high –level delegations comprising of representatives from her government and opposition parties to reflect national unity and collective ownership of dealing with this crisis to reach out to China and India. China recently starting to extend help to the refugees is a good gesture. India might have legitimate concerns surrounding the conflict; however, as the world’s largest democracy it cannot move away from the indiscriminate killings of minority communities in the Rakhine State of Myanmar.
Such delicate matters can only be taken up if there is a serious gesture from Sheikh Hasina at home to deal with the crisis. It is also an opportunity for China and India to rise to the challenge of giving serious leadership in dealing with a regional problem which the broader international community can take note of.

The BNP believes that the border ground rules that were agreed in 1978 and 1993 between the governments of Bangladesh and Myanmar need to be revisited with secured phasing out of refugees, where the Rohingya population is safely returned to their rightful land, properties with international and government assistance to rebuild their homes and livelihood. Bangladesh very much needs the support of international aid to deal with this refugee crisis.

However, given the corruption record of the current Sheikh Hasina government in raiding the domestic state exchequer and publicly owned banks in the country and with the Global Financial Integrity organisation reporting that 61.63 billion dollars have been drained from the country for most of the period Sheikh Hasina’s government has been in office (9.66 billion dollars were drained out alone in 2013) confidence in the administration is likely to be wavering.

The international community should assist Bangladesh by placing checks and balances that ensure transparent processes so that the money is spent on the cause rather than her flawed and corrupt government. The Sheikh Hasina government should stop pandering to the whims of their desire to hold office by force and hedging on this dire crisis both at home and abroad, it should for once listen to the people of Bangladesh and exercise humanity, compassion, and diplomacy to overcome the crisis.