Investments in the era of SDGs and LDC transition 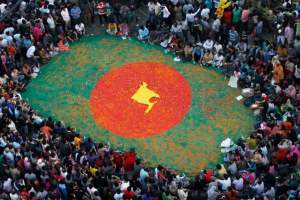 The private sector has been historically playing an important role in economic development of Bangladesh. Almost all the past medium-term development plans have relied on private financing for their implementation. In the seventh Five-Year Plan (7FYP), private sector is expected to finance 77.3 per cent of the total outlays. Bangladesh touched a milestone by attaining the status of a lower middle-income country in 2015. For the first time in the history of the nation, the economy crossed 7.0 per cent growth rate in 2016, breaking the trap of 6.0 per cent growth stagnation for over a decade. The projected growth rate of 7.65 per cent in the fiscal year 2017-18 implies that Bangladesh has entered an elite group of developing countries that has been experiencing higher growth rate of above 7.5 per cent.

During the 2018 triennial review for least developed country (LDC) graduation, Bangladesh also fullfilled the eligibility criteria in all three criteria since its inclusion in the bloc in 1975. For graduation by the designated timeframe of 2024, the country needed to meet two of the three criteria. This achievement is quite unique in the sense that no LDC has ever graduated by fulfilling all three criteria. It shows the strength of the economy as well as underlying challenges ahead. The major challenges, however, remain in investment both in the public and private sectors. Targeted growth will not be achieved unless required investment is made. Table 1 shows the milestone targets against indicators for the planned period. The gross domestic investment is required to be 34 per cent of gross domestic product (GDP) by 2020.

Bangladesh has one of the lowest Tax-GDP ratios in the world. The last two years’ revenue performance is far below compared to what was expected. Nevertheless, tax revenue in the last two years registered a growth of 17.9 per cent and 26.6 per cent respectively. It is evident from the table that although public investment has performed relatively well, government spending has to be raised further. The government needs to find innovative ways of financing both from the public and private sectors as well as development partners and ensure effective and efficient ways of utilisation. Moreover, implementation of the 7th FYP requires total investment of 34.4 per cent of GDP by 2020, of which the private sector is expected to provide 26.6 per cent of GDP. Private investment slowed down over the second half of the last decade while public investment got momentum. Foreign direct investment (FDI) is steadily moving upward since the beginning of the current decade due largely to improvement in business climate, political stability and provision of utility services.

Competitiveness is a major issue as far as investment is concerned. Still, Bangladesh for the first time has been placed among the top 100 (99 out of 137 countries) in the World Economic Forum’s Global Competitiveness Report in 2017. Corruption as perceived by many is still the major obstacle to doing business in Bangladesh. The country has to keep up the momentum of ongoing reforms to make the business climate smoother by reducing the transaction cost substantially. The implementation of the One-Stop Service Act-2017 will be a landmark step towards attracting investments from abroad, provided it can ensure access to required utility services in one go. The export basket of Bangladesh is concentrated in a few items, which should draw policymakers’ substantial attention. The diversification issue was stressed long ago, but found few solutions. Time is also needed for diversification between and within products. For this, the rhetoric of protecting domestic industries largely has to go. There is no reason to protect operating industries that survived three to four decades as they should be able to face competition. The government has been providing incentives to infant industries over a long period of time. The business community must understand that incentives from the government cannot be forever. They also have to strive for improving their own competitiveness. Apart from benefiting from regional blocs, the government must continue to seek government-to-government (G2G) initiatives for new destinations. The G2G initiatives are likely to gear up the establishment of targeted economic zones. The policy for implementing PPP projects through G2G partnerships has been a timely effort made by the government.

INVESTMENT FOR ACHIEVING SDGS: The report titled ‘SDG Financing Strategy: Bangladesh Perspective’ estimates that an additional amount required over and above the current provision of investment related to sustainable development goals (SDGs) by the public sector and external sources would be USD 928.48 billion at 2015-16 constant prices. This amount would be needed for SDGs’ implementation over the period FY 2017-FY 2030, which is 19.75 per cent of the accumulated GDP. The annual average expenditure for SDGs would be USD 66.32 billion (at constant prices) during this period.

The estimates are based on a report by the General Economic Division (GED) of the Planning Commission, which shows that an additional amount, over and above the current provision of investments related to SDGs, would be needed from domestic and external sources. The annual average expenditure for SDGs would be USD 66.32 billion (at constant prices) during this period. Five potential sources of gap financing have been suggested in the report, which are: private sector financing (42.09 per cent), public sector financing (35.50 per cent), public-private partnership or PPP, (5.59 per cent), external financing (14.89 per cent, of which foreign direct investment or FDI 9.95 per cent, and foreign loans and grants 4.94 per cent), and finally non-government organizations (NGOs, 3.93 per cent) on an average per annum. To harness financing for the SDGs, there are specific roles for the government, the private sector, development partners and NGOs to be played in a synergistic manner. PPPs should be tapped for financing at least 30 per cent of total development outlays.

The private sector has historically been playing an important role in the economic development of Bangladesh. It is envisaged that the largest portion of SDGs’ implementation resource gap would come from the private sector. The contribution of external sources is expected to decrease from 18.35 per cent of total additional cost in FY2017 to 13.25 per cent in FY2030, which indicates that external dependency of Bangladesh will decrease over time. The private sector is expected to contribute 42 per cent of the total financing. The government’s share of SDG financing is higher, because most SDG targets are in the public domain. During the transforming period of SDGs, LDC graduation has opened a new vista.

CHALLENGES FOR BANGLADESH AFTER GRADUATION:

4) Graduation may initially have an adverse impact on employment and poverty;

5) Climate shock can pose a serious challenge, since financing opportunity will be limited to integrated funds, such as the Green Climate Fund.

OPPORTUNITIES FOR COOPERATION AND INVESTMENT:

2) Many emerging bilateral development partners are nowadays interested in overseas investments that may open up avenues for cooperation;

3) Upon facing challenges from export concentration, productivity increases and switching to high-end products will be the major focus in sustaining transition;

4) Graduation can force the political masters to strengthen efforts for resource mobilisation and make the economic system more market-oriented;

5) New markets can offer new windows of opportunities for trade depending on the negotiation skills;

6) Bangladesh can seek Generalised System of Preferences (GSP)+ from the European Union (EU) upon graduation, and for that negotiation skills must be improved.

MAJOR ISSUES IN PREPARING FOR GRADUATION WITH REGARD TO INVESTMENT:

1) Maintaining the growth momentum even in the face of election-related political turbulence, if any;

2) Mobilising domestic resources by simplifying and modernising tax collection and expanding the tax base accompanied by tariff reduction in external trade;

3) Making investment for the development of productive capacities

4) Making investment for human development and transformation of labour force from less skilled to semi-skilled;

5) Enhancing export competitiveness by reducing the cost of doing business;

8) Looking for more regional cooperation, connectivity, trans-boundary trade facilitation, and go for as many free trade agreements as possible;

10) Addressing supply constraints of export through proper policy and institutional reforms, rather than seek trade concessions through the LDC route;

13) Devising strategies for graduation based on extensive research and studies;

14) Seeking assistance from the United Nations in the preparation of transition strategy by attaching priority to domestic reforms.