‘The battle of the Adivasis against mining companies is a David and Goliath scenario.’ Pollution from an open-cast coal mine in Jharia, Jharkand. Photograph: Jonas Gratzer/LightRocket via Getty Images

A frail, ailing 83-year-old Jesuit priest, Father Stan Swamy, has become the oldest person to be accused of terrorism in India. He is incarcerated in a Mumbai jail after his arrest last week.

He is one of the gentlest, kindest, softest-spoken men I have ever met. You practically have to strain to catch his words. Fr Swamy has been accused of being a Maoist terrorist. This word conjures up a violent person who exhorts people to revolt, bombs symbols of authority, destroys, murders and does anything else it takes to overthrow the state. But he is the antithesis of this.

His sin? Helping the poor and vulnerable. He has been in the forefront of trying to protect India’s indigenous Adivasi people whose lands are under attack in the eastern Indian state of Jharkhand, where mining interests loom large. The battle of the Adivasis against mining corporates is a David and Goliath scenario. Millions of people will be displaced. The government did so before, on the Narmada river, when the dam gates were opened and flood waters submerged hundreds of thousands of Adivasi homes. The Narmada protest began in 1985 and the dam, built despite mammoth struggles, protests and international coverage, was declared complete in 2006.

Similar tragedies happen regularly in Brazil and other parts of South America. Undoubtedly, it’s the curse of indigenous people all around the globe. No one recognises their rights, which are acknowledged only on paper, as in the 2006 Indian Forest Rights Act. But in practice, most governments ignore these rights when vested interests encroach on indigenous peoples’ land, their forests and their waterways.

Thousands of Catholic nuns and priests have marched in protest against Fr Swamy’s arrest, together with his supporters, students, activists and people who know him as a truly good man. Bangalore and Mumbai saw the largest crowds. Even Hemant Soren, the chief minister of Jharkhand, where Fr Swamy was arrested at his home, has protested – unusually, for a politician.

‘One of the gentlest men I have ever met.’ Father Stan Swami in 2018. Photograph: Mukesh Kumar Bhatt/101Reporters

The nature of the arrest has been called into question. There was no warrant. Fr Swamy asked the arresting officers if he could be interrogated online, rather than being whisked away to jail, as the Covid pandemic is raging across India and the 83-year-old detainee has Parkinson’s disease along with other comorbidities. His plea was refused.

I grew up in Kolkata. In the 1960s, the Naxalite movement, which drew its inspiration from Mao, attracted youth who were tired of witnessing centuries of peasant oppression. What started as a movement to help oppressed people swiftly turned into a nightmare. Criminals jumped on the bandwagon and killed people in cold blood. They killed anyone they had a grievance against. In rural areas, landlords were butchered as they were in the Chinese Cultural Revolution. In the cities, poorly paid constables were massacred with knives, bombs and bullets. A reign of terror ensued. Predictably, the state clamped down. Thousands of young university students were exterminated in a bloodbath by the authorities.

This piece of history was a lesson to activists who followed. When speaking to students or tribal youth, they always warned: “Resorting to violence is foolish. You cannot ever match the violence of the state.”

For Gandhi, nonviolence was not merely the chosen moral path. It was the strategic path, the only path. He shook the conscience of countries around the globe with his new gospel of nonviolence. It was a unique concept, an Indian offering to the world. 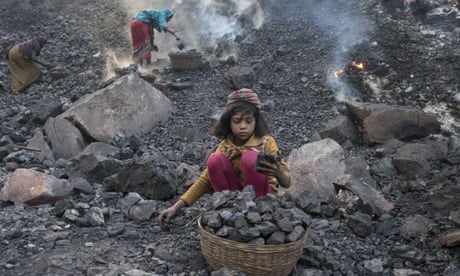 India plans to fell ancient forest to create 40 new coalfields
Post-independence, many people heeded Gandhi’s call to go to the villages and fight poverty and ignorance. Gandhi ashrams all over India were filled with people growing food, teaching children, holding literacy classes for adults. But by the 70s, poverty had not been eradicated. A new generation of human rights defenders emerged. They fought in the courts against injustice, oppressive landlords, for Dalits and women, and against government encroachment on millions of acres of tribal land. They also urged thousands to take to the streets to protest.

Fr Swamy has been an activist priest whose mission is to fight for a kingdom of justice on earth for the poor and oppressed. He taught the Adivasis to organise themselves so their land could not be taken away by mining companies. He has been a great inspiration to myself and my husband in our own movement to support the tribal people in the southern state of Tamil Nadu. If we want to stop the climate emergency and save the planet, we should all study Adivasi people and learn from them. It is our “progress” that creates the excessive consumerism that is destroying our support system on Earth, whereas they live sustainable lifestyles and have the smallest ecological footprint.

Fr Swamy’s arrest is a tragedy not just for India’s indigenous people but for everyone who believes in truth and justice.

• Mari Marcel Thekaekara is a human rights activist and writer based in Gudalur, Tamil Nadu