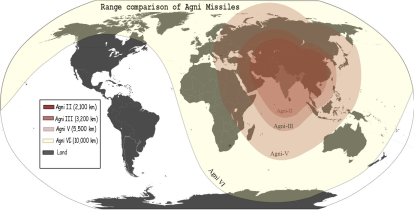 On 18 May 1974, Indira Gandhi gave the go-ahead for India’s first nuclear test at Pokhran in the Rajasthan desert. This explosion was labeled by the Indian government as a ‘Peaceful Nuclear Explosion’ (PNE). Following this path of nuclear development, Indian nuclear explosion affected the region the most as, later, it again conducted nuclear tests in 1998.
After three decades of U.S. imposed sanctions on India in the wake of its 1974 tests, a landmark Indo-US nuclear deal was signed in 2005. This converted their relationship from estranging democracies to sharing an evolving strategic partnership. The deal was also an implicit recognition of India as a nuclear weapons state.

New Delhi has been consistently trying to exercise power in the region. This includes building an overwhelmed military superiority concerning conventional and nuclear technology to isolate Pakistan. Through massive military spending along with sophisticated technological innovation, India is stepping up towards great power status and prestige. It has been using military power as a coercive tool to achieve its strategic ambitions.

Agni-V and the BMD System

Recently, India conducted its Agni-V intercontinental ballistic missile (ICBM) that can target almost all of China with its strike range of over 5,000-km. The missile has Europe, Africa and all of Asia within its nuclear strike range. The Strategic Forces Command (SFC) already has missiles like Prithvi-II (350-km), Agni-I (700-km), Agni-II (2,000-km), Agni-III (3,000-km), Agni-IV (4,000-km) and Agni-V (over 5,000-km), which in turn, have been developed with hegemonic designs in mind. This is a significant threat to strategic stability both at regional as well as global echelons. By achieving this strike range capability, India will get a seat at the high table of an exclusive club of countries with ICBMs, i.e., U.S., Russia, China, France, and UK.
Meanwhile, the Indian military’s aspirations for an operational BMD by every means available is solely a means to fulfill its struggle for attaining global power status. India on the other hand having such system of missile defense, is comfortable with being a U.S counterweight to China.

However, analysts believe that this massive spending on such systems is just defense anxiety by India. This strategy of acquiring BMD will challenge the security of the opponents and will trigger a fresh arms race in the region.

An Indian scholar, recently claimed that the BMD program of India is only adding more uncertainty and affects bilateral relations between India and Pakistan. It is also adding more to the instability paradox of the region.

India’s overt-nuclear-acceptability began through a bilateral nuclear deal with the United States in 2005 that, three years later, brought-forth an exemption by letting it trade sensitive nuclear technology with NSG nations. This NSG waiver has certified India to exponentially upsurge its fissile material stock.

John Carlson in his recent paper asserted through empirical evidence that Indian safeguard agreement coupled with the separation plan does not fall under the policies of existing rules. It is also believed that the existing arrangement shows an unverified grey zone between military and civilian materials. Also, the measurements taken by India are not adequate to validate that it is not using the safeguarded material to fulfill its military needs.

Indian safeguard agreement was signed between the Government of India and the IAEA for the Application of Safeguards to Civilian Nuclear Facilities in Vienna. The agreement was a result of the Joint Statement (Concerning civil-nuclear deal) of July 18, 2005, between India and the U.S.

In the statement, India conveyed its readiness to “assume the same responsibilities and practices …as other leading countries with advanced nuclear technology, such as the United States,” and undertook among other things too:
• identify and separate civilian and military nuclear facilities and programs in a phased manner;
• place its civilian nuclear facilities voluntarily under IAEA safeguards.

The deficiencies in the structural setup being explained by John Carlson pose a real threat of diverting peaceful technology for military purposes with a question mark on the support India is getting for its entry in the export control groups.

John Carlson’s research shows that New Delhi has the flexibility to utilize both safeguarded and unsafeguarded programmes to enhance fissile material production. In Dec 2015, American magazine published details of the secret nuclear city being developed by India at Challakere and its strategic implications, especially for Pakistan and China. India also has accumulated a stockpile of nuclear weapons which threatens to undermine the strategic balance of power and deterrence stability in the region.

Indian Modi’s space diplomacy has extended its satellite programme to ensure long-distance communication for soldiers in the field, cross-border surveillance and more accurate use of firepower.
The Indian Space Research Organization (ISRO), launched the advanced multi-band, state-of-the-art GSAT-7 to be used for defense purposes It was successfully lofted into space by European space consortium, in South America. It was the maiden defense dedicated satellite navigation system that offers an encrypted service for the Indian military and agencies.
GSAT will connect all domains related to defense i.e.;

This carving of a unique place in the universe, by placing an eye in the sky will only be used to fulfill Indian hegemonic and coercive policies. The militarization of space will serve as instruments of coercion. Hence, the offensive military posture accompanied with international cooperation for modernizing India’s space programme will help in damaging the regional strategic stability.

India is the only “maniacal” country that flaunts its weapons to keep her superiority in the region. It also seems that India has succeeded enough to bury its proliferation record over decades and shove it under the carpet.

In this complex geometry of regional (in)stability, India has always acted like a novice in creating linkages between its civilian nuclear and space advances, its nuclear weapon and missile programs. The unfortunate fact is that Indian advancement with foreign assistance is setting a dangerous precedent for the discrimination by the global nuclear non-proliferation Pundits.
Subsequently, India’s hawkish behavior, coupled with military and space modernization shows that South Asia’s nuclear dynamics are likely to be characterized by technological advancements and a strategic arms race into 2018.