India: Why The Incarceration Of Munawar Faruqui Should Worry Us

Faruqui’s case is one in which the judiciary, the police and the Hindu vigilante groups are on the same page, acting in perfect concert. 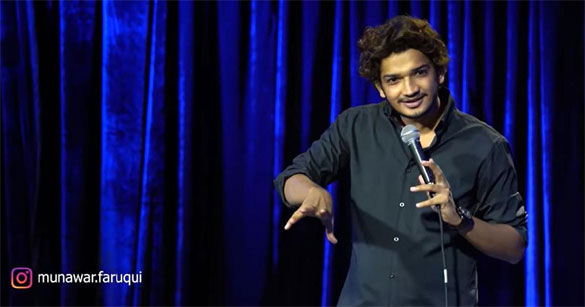 Screenshot via Munawar Faruqui on YouTube
The show hasn’t started. A stand-up comic, Munawar Faruqui, is rehearsing his lines in a café in Indore. A couple of his associates are also with him. A shadowy figure suddenly enters the hall and starts yelling at Faruqui. He alleges that Faruqui has made fun of Hindu deities and thereby hurt the religious sentiments of Hindus. Extremely patiently, the stand-up comic invites this brand ambassador of hurt sentiments on stage and asks him if he has any evidence on the basis of which he is making such allegations. Faruqui reasons with him, tries to explain at one point that he does not discriminate amongst religions and even tries telling him that a certain irreverence is called for in order to appreciate any humour. But all this to no avail.

Reason and dialogue appeal to those who are willing to believe and participate in such principles. The man accusing Faruqui has already come prepared. He and his gruff group of men have already made up their mind and have come with an intent to punish Faruqui. Despite some support from the audience, Faruqui is forced to abandon his performance.

It helps that the person objecting to the planned show, Eklavya Gaud, is the son of the local MLA, Malini Gaud, having deep roots with the ruling BJP establishment of Madhya Pradesh. It certainly did not help that the stand-up comic was a Muslim. The police, without making any preliminary investigation regarding the veracity of the accusation, decided to cancel the show and arrested Faruqui, along with some of his friends. Clearly, things have come to such a pass in this country that one has to think about one’s religious identity even before cracking a joke.

The Indore police is on record saying that it did not have any evidence against Faruqui. They have admitted that the ‘incriminating’ videos are not the reason for his arrest. According to the police, Faruqui was arrested because he might have insulted Hindu Gods during the scheduled performance. They argue that the intent to do so was clear because he was overheard rehearsing some objectionable lines before the performance. Of course, the police did not hear them. The objectionable lines were heard by the complainant, Eklavya Gaud, who claims to be chief of Hindu Rakshak Sangathan. This might be the first case in which someone is being punished for a possible future thought ‘crime’.

Since January 1, Faruqui is under arrest and it is not just the police which is responsible for his tribulations. The local court denied him bail on frivolous grounds; the last one because the police forgot to produce the case diary. Despite the fact that the police station was right across the road from the court, they were given one full week to produce the case diary. Such little regard for the liberty of an Indian citizen is not just a commentary on the police but also the judiciary of the country. But then perhaps the real motive in all such cases is political: Faruqui’s case, like others, is one where the ruling establishment wants to prove to the Hindu majority that it is protecting them from the cultural and religious onslaught of Muslims.

This is an old hegemonic narrative of the Hindu right which is shared by major institutions of this country. So although the police have made it abundantly clear that they have no evidence against Faruqui, they can always rely on the courts to drag the matter so that the process itself become the punishment.

Such brazenness, once allowed, has no limits. Anticipating that eventually the courts in Madhya Pradesh will have to let go of Faruqui because of lack of any evidence against him, the Uttar Pradesh police now have unearthed an old and yet ‘incriminating’ video of his on the basis of which they are seeking his custody. This again is an old tactic of the police, used against many Muslim youth. By the time such youths are ultimately freed by the courts, they have lost years of productive life in various state prisons.

In any other country, this would have been a scandal. But in India, even the so called opposition wants such stringent laws to remain on the statute books so as not to appear any less nationalist than the ruling establishment. It is clear therefore that behind the political witch hunt of Faruqui, there is an elaborate inter-state collaboration between Hindu right wing groups, who are calling the shots from behind. The comedian is being made into an example of what can be done to a Muslim, if she is even perceived to be independently speaking her mind.

Faruqui’s case is one in which the judiciary, the police and the Hindu vigilante groups are on the same page, acting in perfect concert. The police and the Hindu right wing groups have acted in tandem with each other since decades. What is more shocking is the attitude of the courts to keep a person in prison simply because his acquittal will create a ‘law and order’ problem. This logic given by the Indore court, while denying bail to Faruqui, is not just strange; it is in fact the clearest example of how far we have travelled on the path of majoritarianism.

Arshad Alam is a columnist with NewAgeIslam.com
This article was first published on https://www.newageislam.com