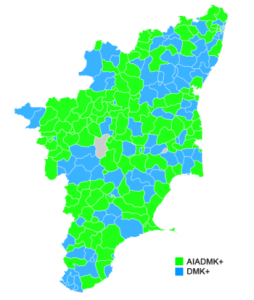 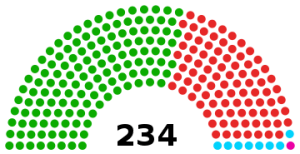 In Tamil Nadu as elsewhere in the country, corruption plays a pivotal role in politics. As the problems of rung party increasing, corruption in the state keeps playing devil’s role at all levels. No one can do anything without adequately bribing the “concerned.”

Indian system permits that, unfortunately. By 202o – the cut year for the federal government to make a new India – the situation could be even worse.

Dinakaran, the nephew of jailed Sasikala, removed by former CM Jayalalithaa from the ruling AIADMK for corrupt and suspicious activities, and was nowhere until recently, is now doing all talks in the media, seeking to take over the ruling party and government. Having pulled a few MLAs from the ruling party, he is threatening the government’s tenure.

Death of Jayalalithaa has exposed the real disunity in the ruling party as among those who didn’t get any ministerial berths or other favors from her but could not revolt against her are not against the weak government today.

The faction led by jailed Sasikala and her brother Dinakaran who used the arty and Jayalalithaa’s position to increase their illegal wealth, is busy wooing as many MLAs as possible to their side from the ruling AIADMK to weaken the government and force the CM Palanisamy to step down so that Dinakaran could rule the state on behalf of her dear sister, the self-proclaimed Chinnamma.

The MLAs supporting Sasikala and Dinakaran continue to enjoy five-star life at a tourist resort in Pondicherry, and apparently, they are also paid the huge sum by Sasikala possibly from the Jayalalithaa’s money. The happy MLAs enjoy fast food and slow walk on the beach, play all sorts of games, consume free liquor, etc., Earlier, Sasikala had kept all MLAs in a resort on the outskirts of Chennai.

As Sasikala and Dinakaran played significant role in dividing the ruling AIADMK by throwing out former CM O, Panneerselvam, former CM Jaya’s closest party member and appointing their favorites as party functionaries. In fact, the MLAs who are now behind the Sasikala and Dinakaran were opposed to Jayalithaa policy of making appointing according to her wishes, especially OPS whom she preferred to be the acting CM.

The meeting discussed the issue of 19 (allegedly 22) legislators giving a letter to Governor C. Vidyasagar Rao withdrawing their support to Chief Minister E. Palanisamy and wanting a new Chief Minister.
As the rival Sasikala/Dinakaran faction tried to woo more MLAs to their side to threaten the ruling government, the United All India Anna Dravida Munnetra Kazagham (AIADMK) on Monday the August 28 met at the party HQ and passed a resolution to expel VK Sasikala and TTV Dinakaran, so-called General Secretary and Deputy General Secretary respectively permanently. It has also been decided to take back AIADMK official media “Jaya” and “MGR” from Dinakaran. The meet under Deputy Chief Minister O Panneerselvam passed four resolutions and invalidated all orders passed by Sasikala and Dinakaran. As per the resolution, AIADMK party mouthpieces Namadhu (Our) MGR and Jaya TV will be retrieved legally.

Ever since the faction led by Chief Minister Edapaddi Palaniswami sidelined him, Dinakaran has been trying to establish his supremacy within the party as its “Deputy General Secretary” appointed by Sasikala before going to the jail. Dinakaran had on Sunday dismissed Palaniswami as the party’s Salem Suburban District Secretary. Earlier he had sacked several party officials like former Minister S Gokula Indira, Chief Whip S Rajendran, and others and also expelled from the party Rajya Sabha Member R Vaithialingam.

Ex finance minister Jayakumar had offered to give his position to OPS for a merger formula, and he has done so as part of his efforts to successfully bring the factions together. In fact, he is one of best leaders who worked tirelessly for the merger, and as such, he deserves accolades for that.

The Election Commission has recognized only these two factions at the time of the by-poll for the R K Nagar constituency. The by-poll got postponed on the grounds of money play in bribing the voters. Subsequently, a third faction emerged under Palaniswami as it developed differences with Sasikala-Dinakaran faction which ridiculed Palanaismami as a traitor and one who entered the top job by the back door. But Palanisamy replied that Dinakaran was removed by Jayalalithaa and he is not a member of the party.

The resolutions have angered the Dinakaran and his MLA supporters. On 29 December 2016, the AIADMK which, after the sudden death of CM Jayalalithaa, was taken over by Sasikala Natarajan who had worked in Jaya’s House passed a resolution to work under the leadership of Sasikala. Jayalalithaa had kicked Sasikala out of her Poes garden for some time before the CM pardoned her to return to her house. Most MLAs wanted to save the party and government and thought Sasikala is sincere about that, not knowing her hidden agenda to promote herself and family and mint more money as CM. She punished those whom Jayalithaa promoted.

As resolutions nullify all the decisions made on August 10.by party “deputy general secretary” T.T.V. Dinakaran they would have no legal impact as his appointment was also announced null and void. The AIADMK meeting at Chennai’s Royapettah was held today. Chief Minister Edappadi K. Palanisamy and O. Panneerselvam were present in the meeting.

On August 26, Dinakaran said that all those MLAs supporting him would teach a lesson to those who want to evict Sasikala.

Over the last few days, many MLAs of the AIADMK have pledged support to Dinakaran taking the strength of his camp to 21. The anger within the EPS over its merger with the Panneerselvam camp was evident as the MLA publically chided the Chief Minister for his decision.

While the DMK and the Congress have been urging the Tamil Nadu Governor to direct Palanisamy to prove his majority in the House, no decision on the same has been taken yet.

Governor C. Vidyasagar Rao is expected to return to Tamil Nadu shortly, after which he is likely to ask Palanisamy to take a floor test. This would be the second time in six months that the State Assembly would witness a floor test if it happens.

Inordinate delay in bringing the two factions together helped the Dinakaran to woo some MLAs to his side. Dinakaran thought the factions would never come together and when they did rejoined to revive the AIADMK, Dinkaran is annoyed. Now he is eager to destabilize the government and might even support the DMK to pull down the ruling government, though the “Chinnanna” Dinakaran says he doesn’t have any such hidden agenda. This double talk worried the people who want a regular government to function properly to make policies to promote theirs in genuine interests.

DMK demands the Governor to convene an assembly session for the government to prove its majority. Dinakaran wants the CM Palanisamy to step down.