India: Russian made S400-Sword or Shield 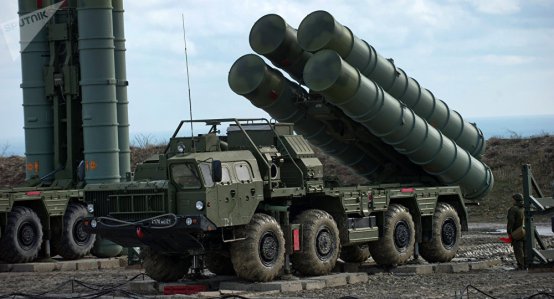 India’s quest of becoming a regional powerhouse through strengthening its military power has seen some significant developments in the recent times. The most recent and probably the most significant development is the sale of S400 missile systems from Russia worth upwards of five billion dollars. Often touted as the most advanced, accurate, flexible and deadliest of all air defence systems in the world, the S-400 is reportedly capable of engaging aerial targets out to a range of four hundred kilometers, while the system also possesses the capability to intercept incoming ballistic missiles, although to a much shorter range.

In recent times, a cash-strapped and sanction riddled Russian economy has made Moscow turn to its arms industry to keep the cogs of the State machinery rolling. Both the S-300 and S-400 systems have proved to be favorites amongst countries that import arms from Russia. Apart from India, China has also signed agreements for the supply of S-400s, this indicates that Russia is not picking sides but is merely working to fill its coffers.

On the other hand, the hyphening of arms trade as a foreign policy tool still continues, as evident from the sale of S-300s to Iran and Syria not only to counter the American presence in the region but to also provide a deterrent against America’s regional allies namely Saudi Arabia and Israel. Given the fact that both Israel and Saudi Arabia have a distinct air power advantage in the region, S-300s would be crucial for both Iran and Syria to maintain some semblance of a deterrent against their respective regional adversaries.

Like the AK-47 in the 20th Century proved to be one of Russia’s most prolific and influential exports, it seems like the S-400 is posed to be the stalwart of the Russian defence industry’s export portfolio. Another commonality between the two vastly different weapon systems is the ability to change tactical, political and even strategic landscape of a given region.

Given the flexibility and range at which the S-400 can engage targets, it remains to be seen what role the Indian military assigns to it. The advantages of the system as a conventional deterrent will be limited if it is deployed deep within the Indian territory to protect population centers or other strategic installations. Given the fact that India has been developing its own Ballistic Missile Defence (BMD) systems in the form of the Advanced Air Defence and Prithvi Air Defence systems, it is likely that the inclusion of S-400 is envisioned as a long-range deterrent against aerial threats. However, the counter to this line of argument is that India already enjoys a numerical and qualitative edge over Pakistan Air Force (PAF) and these systems are to be employed as dedicated BMDs.

The acquisition of S-400 by India has far-reaching implications for Pakistan both at the conventional and strategic levels regardless of how they are poised or deployed. Given the history of mistrust and hostility between the two countries, a long-range anti-air weapon such as the S-400 has the potential to create escalations if used to target air assets within Pakistani airspace as was witnessed during the Atlantique aircraft shoot down shooting in the year 1999. Although the two countries have devised agreements that limit the flight of fixed and rotary aircraft within a certain range of the international border or the Line of Control, there is a lack of any mechanism that prevents targeting of such aerial platforms. The capabilities of the S-400 system increase the chance of any outward incident by its accidental, unintentional or unauthorized usage.

Given Pakistan’s meagre financial sources, it might be that Pakistan may be compelled to resorts to further develop its nuclear arsenal not only regarding capabilities but also numbers to ensure that its deterrent survives against India’s rapidly developing BMD systems. The concept of an effective BMD in South Asia may be a misnomer in terms of technological limitations where short distances might not allow for such systems to work as intended. India has shown its intention of moving away from its declaratory policy of No First Use (NFU) and has developed counterforce targeting capabilities such as the BrahMos cruise missile and the Prahaar Short Range Ballistic Missile. Given this shift in doctrine and policy, the technological developments of BMD and counterforce targeting might be an indication of India’s move towards preemption in any future crisis. Further, such a capability may also encourage the possessor to dominate the escalation ladder, thus having serious implications for crisis stability in South Asia.

South Asia is in the midst of a political and geostrategic flux where alliances are shifting, evolving and newer partnerships and alliances are being developed. The Indo-US partnership is now at an advanced stage where it can be termed as an alliance. The American indifference to Indian technological developments such as Agni V Inter-Continental Ballistic Missile, which has capabilities to target entities far beyond India’s declaratory rivals of China and Pakistan, along with the preferential and exceptional treatment afforded to India in the case of Nuclear Suppliers Group membership shows that India is viewed as not only a regional competitor to China but also as a net security provider in the region by the US.

The preferential treatment to India is further quantified by the fact that the purchase of S-400 by China and Turkey resulted in sanctions under the CAASTA regime while India might get a waiver or have to balance this purchase by buying from American military vendors as well.

Any quantitative or qualitative countermeasures that Pakistan adopts against such developments are bound to incur the criticism and wrath of the self-professed champions of non-proliferation and global peace. These powers continue to tolerate or even encourage destabilizing developments by India while scrutinizing any and every effort by Pakistan to ensure strategic stability.
Whether the S-400 is envisioned as either a shield or sword by the Indian military planner remains to be seen, but given the capabilities of the system, it can be either or both.