India: Once There Was News. Now There Are Loud Anchors, Sold Out Editors and BJP’s IT Cell

The state of news now has lulled Indians into believing that their country is fine. This may prove costly in the future. I’ve looked up the figures and they are very impressive. As on March 31, 2018, India had 100,000 publications registered with the Registrar of Newspapers, and these had a circulation of 240 million.

There are 850 TV channels and 197 million idiot boxes on which to suffer them. There are 460 million internet users, 17 million Twitter users, as on July 2020 (including obviously the three judges of the Supreme Court who were so scandalised by Prashant Bhushan’s tweets), 303 million Facebook users and approximately 300 million WhatsApp accounts.

These figures should ideally be representing an information ecosystem that can churn out a Nobel laureate every time Narendra Modi says ‘Mitron’, not a rancid Tejaswi Surya every time Amit Shah says, “Aap chronology samajhiye…”

How is it, then, that with such a wealth of information on tap, 37% of our voters still think that the “achhe din” have arrived, or are just around the corner – first turn right after Ayodhya, take the sign which says “Kashi, Mathura, two judgments away?”

Or that, as a recent opinion poll shows, 69% think that the Chinese have been given a befitting reply, even as 20 of our finest have been brutally killed by the said Chinese? Or that almost 50% are happy with the way the economy is going, which is down shit creek without a paddle? Or that almost a thousand “eminent” (and unknown) lawyers approve of the conviction for contempt of the one legal activist who has perhaps done more to defend and champion the rights of the citizen than a dozen courts and Bar Associations put together?

How is it that we believe without question a prime minister (the country’s sole post graduate in ‘Entire Political Science’) who tells us that no Chinese were on the Indian side of the LAC even as a few hundreds of them were playing water polo on our side of Pangong Tso Lake?

Or various ministers of the BJP recommending papad, cow dung and group singing as sure-fire cures for COVID-19, the Railway Minister crediting Einstein with discovering gravity?

How is it that almost 75% of respondents in that same poll feel that this government is doing a fine job when tens of millions are jobless, thousands have been locked up on flimsy or no charges, one thousand are dying every day of the virus, every institution has been subverted, the Chinese, Nepalese, and Bangladeshis are growing more flippant every day?

Why is it that a Bollywood actor’s unfortunate and mysterious death is more newsworthy than continued rapes in Uttar Pradesh, floods in Assam, lies about Ladakh, the continuing arrests of academics and activists on trumped up charges, the motivated distortion of education policies and curricula, an economy which has contracted by 24% and is the worst performing of all major nations? Why are we unable to sift the chaff from the grain?

Also read | Delhi Riots: ‘Is Police Inquiring Into a Conspiracy or Is the Inquiry Itself a Conspiracy?’

There could be two answers to this conundrum. The first, of course, is that I am biased, living in an ivory tower, do not have my finger on the pulse of the people in the same manner that Amit Shah has it pressed on our collective jugular. That I am not particularly enamoured of a prime minister who is busy feeding peacocks when everything is crumbling around him. 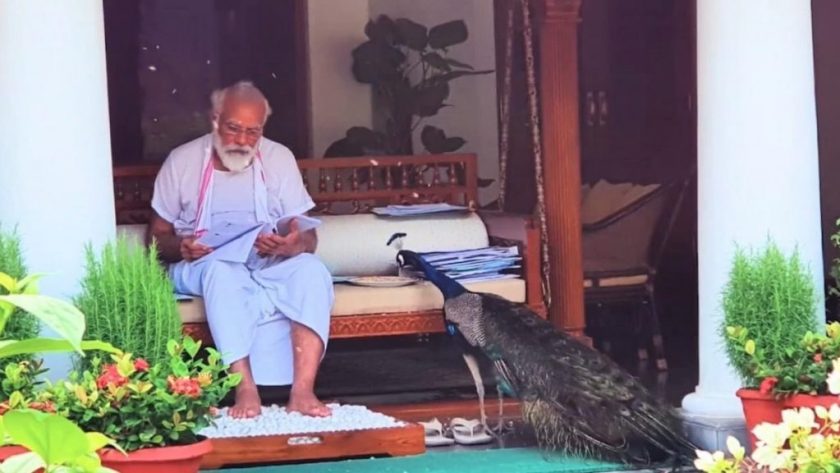 PM Narendra Modi in a still from the video he shared on social media, featuring peacocks. Photo: Twitter

This could well be true, though I did begin life as an enthusiastic supporter of Modi before I saw the light, or rather, the impending darkness.

But there could also be a second, politically neutral answer provided by Thomas Jefferson many years ago: “The man who reads nothing at all is better educated than the man who reads newspapers.” Had he been unfortunate enough to be alive today, he would no doubt have also added TV and internet to newspapers.

It appears to me that Jefferson has put his finger on the spot: the problem today is precisely this. There is a surfeit of bilge floating around, masquerading as news, which suits the ruling dispensation fine.

Where is the news today, the narration of facts, the discovery of governmental misdeeds, the exposure to differing perspectives, the cogent discussions which can help us to formulate our views?

We may have 800 channels and one lakh publications, but they do not provide any news – what they generate is the clamour of clashing egos, trumpet blasts of fanatical dogmas, fountains of obsequious slime, truckloads of hatred and anger, and the occasional apoplectic writhings of an anchor doing the “drug dance“.

With very few exceptions, what we get is opinions – of the basest kind – not news and facts.

The resultant cacophony kills news. The waters are so muddied by alternative facts, untruths, fake news that only the loudest can be heard, and who can possibly be louder than the likes of sold out anchors, self-seeking editors and the BJP’s IT cell?

All deliberately creating diversionary narratives to blank out the issues that matter.

Consider the media’s responses to just two recent events. The death of Sushant Singh Rajput has been converted into a media-cum-judicial circus not seen before; there has been nothing else on TV for the last two months.

Watch | Actor #RheaChakraborty arrives at Narcotics Control Bureau office. She was summoned by the NCB this morning in drugs probe linked to #SushantSinghRajput case. pic.twitter.com/a5gopOnDaJ

At last count there were at least a dozen motives attributed for his death, limited only by the anchors’ fetid imagination: pedophilia, rape, extortion, politics, nepotism, drugs, and mental illness.

Reputations and careers are being destroyed with little or no evidence, and every anchor has been indulging his or her despicable voyeurism to the hilt. One channel even came up with a detailed forensic and postmortem report based only on a photo of his body.

Another gave a list of seven reasons to prove it was murder, not suicide. Yet another anchor, known for his St. Vitus’ dance on prime time, instantly announced a politician guilty in an attempt to serve his own sick psychosis.

Everyone has an opinion on the case, except of course the Mumbai police. Not one word of rational discourse, or about the various crises facing the country today. But of course there was time enough to show the prime minister feeding peacocks.

Thankfully, there was no panel discussion on this momentous event.

The same happened with Ladakh. Our media would have us believe that we have given China a bloody nose, that the banning of 150 apps is just recompense for the death of 20 Indian soldiers and occupation of hundreds of square kilometres of our territory, and that our prime minister’s resolve has ensured that Xi is on his way out. 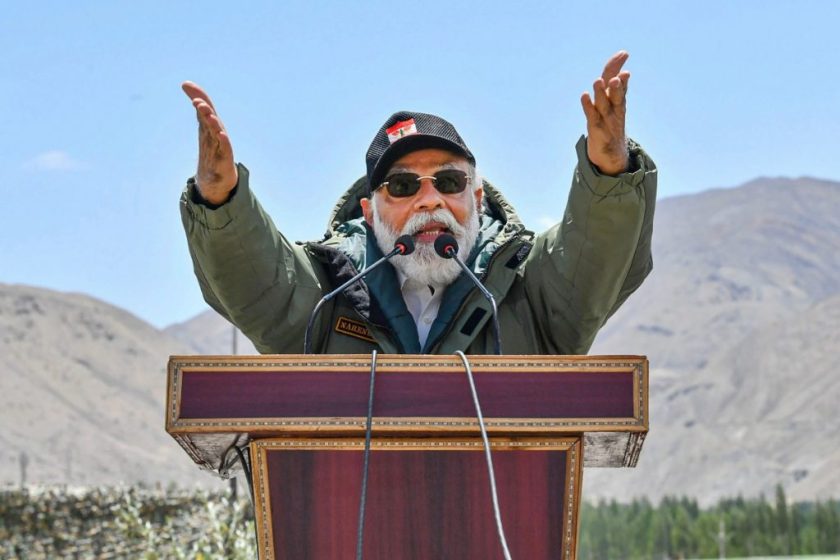 Modi, during his address at Nimu in Ladakh on July 3. Photo: PTI

The manufactured outrage of anchors whose faith in government handouts would have been touching if it was not so self serving and sickening, their steadfast refusal to present the facts to their audiences and readers, has lulled most Indians into believing that we have secured a great victory, and into swallowing the government’s propaganda.

This may prove costly for the country in the long run.

Not that the Chinese are complaining. Xi is quite happy to have incurred the displeasure of our ethically disadvantaged anchors so long as they keep concealing the fact that his PLA continues to sit on thousands of square miles of Indian territory. Whose interest are these dissemblers serving?

The root cause of this destruction of our media eco-system and replacing it with a propaganda framework is, of course, the government and the ruling party’s spokespersons. The government, over these last six years, rarely shares the truth with its citizens. It is more comfortable with suppressing, distorting or denying it.

It is ably assisted in this by the party’s IT cell, its virulent spokespersons and of course, Facebook. If, in spite of this some journalist accesses the actual facts and the truth, he is summarily hauled to the nearest police station. Most news organisations have smelt the “kadha” and have fallen in line.

Social media belongs to the ruling party, and the latest exposures relating to Facebook only confirm what was well known.

The millions of fake accounts, the well trained trolls, the synchronised abuse of any sane voice ensures that only that is heard which the government wants heard. Paradoxically, however, digital platforms provide also the only space where one can hear some independent voices and a view contrary to what the government wants you to hear.

All the rest is a tower of Babel and the world of Goebbels.

India is, of course, unfortunately an outlier when it comes to combating this kind of regimented and mercenary news eco-system. In every other progressive democracy civil society is challenging this new normal, forcing the governments to back off and compelling the digital gate-keepers to change the way they function, to stop the digitalisation of hatred and intolerance.

The tech giants who monopolise news and social media are being grilled by legislative oversight committees and being forced to censor the posts of even presidents and prime ministers.

Corporates are being compelled to withdraw advertising revenues to these tech companies for hosting malcontent and hate speech: in recent days Adidas, Diageo, Ford, Honda, HP, Hershey’s and Coca Cola among others have suspended their advertising on Facebook.

And yet in India the government and the ruling party are supporting Facebook and coming out in defence of its partisan behaviour.

Anchors are debating whether it leans to the left or the right. Experts are discussing whether what Cambridge Analytica did in 2019 was worse than what Facebook is doing now! Efforts are being made by the BJP to remove MP Shashi Tharoor from the chairmanship of the Parliamentary Standing Committee on Information Technology because he wants to examine Facebook on this matter.

It will be a long time before we can hear anything worthwhile on the 9 o’clock news. But even this kind of inane journalism has its uses. I personally take some comfort from the prescient words of Oscar Wilde: “By giving us the opinions of the uneducated, journalism keeps us in touch with the ignorance of the community.”

Finally, that India Today “opinion poll” of last month is beginning to make some sense.

Avay Shukla is a retired IAS officer. A version of this article appeared on his blog and has been edited by The Wire for style.