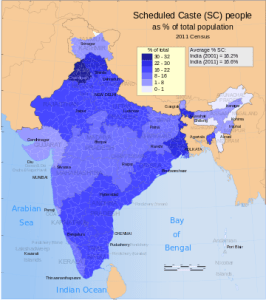 India is over-sensitive about China’s engagement in South Asia. China’s defense minister visiting Sri-Lanka and Nepal was hyped up a lot in Indian media during March. (1)
Chinese Vice-Premier Wang Yang holding talks with his Nepali counterpart last month also made India quite anxious. (2)

This is an assertion of India’s underlying tribal and collectivist culture. (10)

The Indian subcontinent was characterized by various kingdoms, which used to fight with each other for domination.
Muslim invaders subjugated most of the Indian kings and established their rule in the medieval periods. They were followed by the East India Company and then the British rule.
Britishers shrewdly founded a political party in India during 1885. This party Congress was formed by A.O. Hume (a retired British govt. employee). The main purpose of Congress party was to enlist Indians sympathetic to the cause of the Britishers in India. (3)

Congress served the cause of British Empire well during the pre-independence era by keeping in check real freedom fighters like Bhagat Singh. (3)
When the British left India, all leaders had been selected and nudged into their positions by them. First Nehru, then his daughter; Indira, who was followed by her son; Rajiv and then Rajiv’s wife, Sonia ruling India through a proxy, Manmohan Singh. (10)

The first Prime Minister of India and a Congress party leader Jawaharlal Nehru was in awe of the Britishers. He was a megalomaniac, womanizer. (9)
Most of Nehru’s ideas like ‘Planning Commission’ and five-year plans were borrowed from the Soviet Union, (4) while he falsely preached nonalignment towards both U.S.S.R and U.S.A.
In the name of this ‘fake’ socialism, scarcity of everything was created in India. One had to turn to the government for license and permits. This laid the foundation of crony capitalism in India, whereby a few resourceful individuals with contacts in the ‘corridors of power’ managed to corner all lucrative contracts and deals while ordinary Indians were made to wait in lines for everything.
This turned Indian bureaucracy very ‘elitist’ and made Indian bureaucrats arrogant, rude and ‘change resistant.’

India’s bureaucracy is still based on the British colonial model. British officers were in control of administration when India was a British Colony. For easing their workload, they hired Indians at the clerical level. (5)
Indians who served the British Empire were quite rude and arrogant. They regarded their fellow Indians with contempt. (5)
Indian bureaucracy thus inherited an inflexible functioning style from its colonial masters. These bureaucrats change their dress code and behavior like a chameleon depending on the political party in power.
They are sycophants of the first order towards politicians in power while being scornful towards the general public. They remain satisfied in their comfort zone of antiquated theories.
These officials are primarily responsible for feeding useless narratives to the Indian politicians and media about China. (6)
Relations between nations are not like a marriage, where marital fidelity is important. Every nation can deal with any country for mutually beneficial deals.
Sri-Lanka, Nepal, Bangladesh, and Bhutan can easily maintain cordial relations with both China as well as India. This immature behavior of Indian bureaucracy eyeing everything that China does with suspicion is highly immature.
It is a result of their Congress era Nehruvian infused lethargy, a misplaced sense of self-importance and inflated egos.
The author spent many years in The Netherlands and closely interacted with a lot of Nepalis and Bangladeshis there.
Nepal has always received favorable treatment from India. Nepalis can come, work and easily settle in India. In spite of this Nepalis don’t like India and Indians.
Bangladesh owes its existence to India without India’s help this nation would not have come into being. Majority of Bangladeshis also do not carry a positive image of India.
So, why should India bother about these countries? Let them do whatever they wish.
According to a survey released by the Transparency International (TI) in March 2017, India is the most corrupt country in Asia with very high prevalence of bribery in the public sector of the country. (8)
TI is a Berlin, Germany based anti-corruption global civil society watchdog. (8)
The inequality between the haves and have not’s is rising rapidly in India according to India Exclusion Report 2016 by the Centre for Equity Studies. (11)
Development can be seen at close quarters by the poor but remains out of their reach. More than 38 percent of children in India are stunted, while 29 percent of them are underweight, as per the Global Hunger Index 2016. (11)

The World Bank states that India has the largest number of people in the world living below the international poverty line of $1.90 a day. 30 percent of Indian population comes under this category. (11)

As per the Census of India, six million children in the country aged 6-13 have never been to school. (11)
The Annual Status of Education Report carried out in rural areas by the Non-Government Organization, ‘Pratham’ reveals that after about three years in a government school about 60% of the students still cannot read anything except their names. (12)

This poor quality of education in the government schools of India threatens the future of millions of children in the country. (12)
The public spending on Healthcare as per the World Health Organization in India was only 1.4% of the country’s GDP in 2014. (11)
In the commitment to Reducing Inequality Index, 2017; India’s commitment to reducing inequality was ranked 132 out of 152 countries. (11)
India should forget about becoming a global power. It cannot even become a regional one unless it puts its own house in order first by addressing the above serious domestic concerns of corruption and income-disparity.

There are more internal challenges in the form of casteism, religious- fanaticism, over-population to name a few.
Indian establishment must focus on the internal issues facing the country instead of meddling with Bangladesh, Nepal, Bhutan, Sri-Lanka and daydreaming about a military confrontation with China. (13)