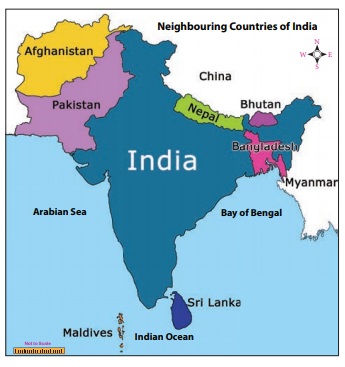 India enjoys a much better image among countries that are not its immediate neighbors. This is indeed sad because it could offer much in terms of mutual economic benefit to all the countries which border this vast and populous country. India’s neighbors include China, Pakistan, Bangladesh, Sri Lanka, Myanmar, Afghanistan, Nepal, Bhutan, and the Maldives.

Unfortunately, not one of them will cite India as a good and reliable neighbor.

India has had an uneasy relationship with China since the 1960s when the latter took over Tibet and the Dalai Lama took refuge in India. A brief border war followed in which China soundly defeated India. China voluntarily stopped after occupying a few key strategic territories overlooking the northern borders between the two countries. Earlier this year it encroached further into Indian territory and the border tensions continue.

The political relationship between India and China is further soured by the long-term “all-weather” friendship and alliance between China and Pakistan. India also has made China unhappy by participating in military exercises with the USA, UK, and Australia aimed at countering the Chinese Navy’s domination of the South China Sea. There is very little hope of an improved relationship between these two countries so long as India acts as a surrogate of the USA.

Pakistan has been India’s biggest enemy from the very first days of the birth of these two nations. A significant section of India’s population and powerful politicians from the ruling BJP party still dream of “undivided” India. This, politically or militarily, is unlikely to happen as Muslim majority Pakistan will never give up its sovereignty and there is a military stalemate with both countries having nuclear bombs. There is also continuing issues like Kashmir whose population has been denied the right of self-determination for almost 75 years.

A reset of a relationship is not impossible. Common persons on both sides of the border would welcome cessation of hostilities as they share a common history, culture, cuisine, and love for movies. While Pakistan’s liberal and articulate Prime Minister is trying to gently push its country from extreme Islamic practices, Prime Minister Modi is pushing India towards extreme Hindu nationalism with its hatred of Muslims and Christians. It is difficult to see a path out of this complex conflict without transitioning to a new generation of leaders with liberal and inclusive ideas.

Bangladesh and India should be natural partners as the former successfully seceded from Pakistan with the latter’s help and direct military intervention. India took advantage of the initial goodwill by flooding Bangladesh with its goods and services. In recent years India has blatantly taken sides in Bangladesh’s internal politics, aligning itself with the ruling Awami League.

Bangladeshis in general are very independent-minded people who do not like anyone playing “Big Brother” and it is not a surprise that India has become increasingly unpopular in Bangladesh these days. India would be better off stepping back a bit from its dominating stance. It is not lost to the Bangladeshi population that hardworking expatriates send home annually over $12 billion dollars by working the toughest jobs in the Middle East and other places. An equal amount is also remitted out of Bangladesh by a small number of Indians occupying key positions in both local and foreign companies. This is ironic because Bangladesh has many qualified locals who could easily fill those jobs.

Sri Lanka suffered for many decades from the insurgency and guerilla war by Indian-origin Sri Lankans, also known as Tamil Tigers with direct financial and military assistance from India. Finally, Sri Lanka launched a full-scale military offensive and ended the war. Though some of the techniques used were the brutal majority of Sri Lankans felt the secessionist Tamil Tigers could not be silenced in any other way.

India sided with the Americans in the Afghanistan war and profited handsomely from contracts to build buildings, roads, schools, and providing supplies to the foreign troops. With the departure of US troops, India is now on the wrong side of politics. It is unlikely that the Taliban, who received explicit and implicit help from Pakistan, would become friends with India soon.

India has wisely stayed out of Myanmar politics while it has effectively turned the smaller neighbors like Nepal, Bhutan, and the Maldives into virtual protectorates with limited authority to act independently. The same is the case with the Maldives which in recent times has been turned virtually into a vassal state of India, anti-Indian sentiments are brewing and boiling over.

There is a saying that “be at war with your vices, at peace with your neighbors and let every new year find you a better man.”

It would be in the interest of India to mend and reset its relationship with ALL its neighbors.

India will earn the respect of China if it stops being a chess piece of the USA to contain China’s influence. India and China have complementary economies with the former focusing on “services” and the latter on “manufacturing.” Their economic and political policies could be complementary and mutually beneficial.

The general population of all India’s neighboring countries would welcome India renouncing its disastrous shift towards blatant Hindu chauvinism and its alleged sub-regional political and economic expansionist ambitions.

India cannot boast about being the world’s largest democracy and yet prosecute all religious minorities. Covid-19 has exposed India’s economic weaknesses and inequity among regions and people. As someone pointed that India lives in three centuries concurrently.

Indeed, for India to prosper better, be mutually beneficial, and be respected especially by its neighbors, it needs to live in one century – this century, and in a globalized world where cooperation and not conflict is the way forward.