India, Multilateralism and the national interest in a realist approach 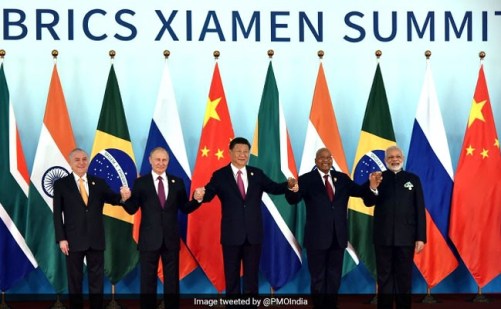 The 9th BRICS Summit was held in Xiamen, China, between 5-9 September, only a few days after the announcement of the disengagement of troops along the Doklam Plateau. The joint declaration stated that terrorism is a threat to be fought, naming Pakistan-based Jaish-e Mohammad (JeM) Lashkar-e-Taiba (LeT) and Haqqani Network for the first time as global terrorist groups. This was considered a significant diplomatic win for India since it is the only country of the BRICS which is directly affected by the actions of these groups; and since China has been reluctant in allowing this topic to be part of the bloc’s agenda.

The fact that India has managed to name jihadist groups for the first time in a joint declaration demonstrates how New Delhi has been exploring multilateral forums to speak up for its national interests. Multilateral blocs, by definition, are structures constituted by more than two countries with some convergence of aspirations that agree, usually through formal treaties, to work together towards fulfilling these common ambitions. Naturally, there is one country which usually stands out regarding political and economic influence among the other members, but joint declarations tend to leave aside national interests to display the convergence of parts.

Since last year, one can say that multilateralism has gained a new momentum as an instrument of India’s foreign policy. As a country that historically gives preference to bilateral agreements, New Delhi realized that international forums represent an opportunity to speak up in favor of its agenda and gain support from other leaders on water and border conflicts in Kashmir, and against China’s incursions in South Asian countries. During the 8th BRICS Summit last year in Goa, Prime Minister Narendra Modi made a speech criticizing Pakistan and China for turning a blind eye to Taliban actions in the disputed borders. Even though the bloc is focused on economic cooperation rather than on security issues, both Brazilian and South African leaders agreed with Modi’s speech, despite the geographical distance and the fact that none of them are affected by LeT or JeM.

Same thing happened in June this year when India became a full member of the Shanghai Cooperation Organization alongside with Pakistan. Modi’s remarks in Kazakhstan followed the same pattern of addressing terrorism as a major threat to humanity, pointing out the role of states in sponsoring jihadist groups. Unlike BRICS, the SCO has substantial and formal mechanisms and procedures for counterterrorism through its Regional Anti-Terrorism Structure (RATS). Nevertheless, the focus of the group has always been energy cooperation in the resource-rich region of Central Asia.

Also at the United Nations, since last year India has been responding to the words of Pakistani’s diplomats that bring out the Kashmir issue to the conferences. Only a few days ago, even Baluchistan was mentioned in the context of human rights violations by Islamabad. This is also a significant factor since both countries have tried over the years to keep the U.N out of the disputes. Now, it became a place to obtain international support for their regional pleas regarding Kashmir and the Indus Water Treaty misunderstandings.

The appropriation of multilateral forums for the benefit of India’s national interests suggests two important aspects: first, it is aimed at gaining international support for its fight against the Taliban in South Asia and strengthen the legitimacy of its military actions before the international community. Secondly, it illustrates the ongoing diplomatic efforts to counterbalance China’s growing influence in South Asia, as shown by its “all-weather-friendship” with Pakistan and the recently launched Belt and Road initiative. By raising its concerns and receiving support from countries which traditionally don’t interfere in the internal affairs of other states, India has a chance of empowering its leadership in external affairs. Reshaping multilateral arrangements to safeguard its interests and keep up with this policy should be one of the priorities for India’s foreign policy in the coming years. The recent BRICS declaration serves as an example of how national interests and multilateralism can work together towards India’s progress.