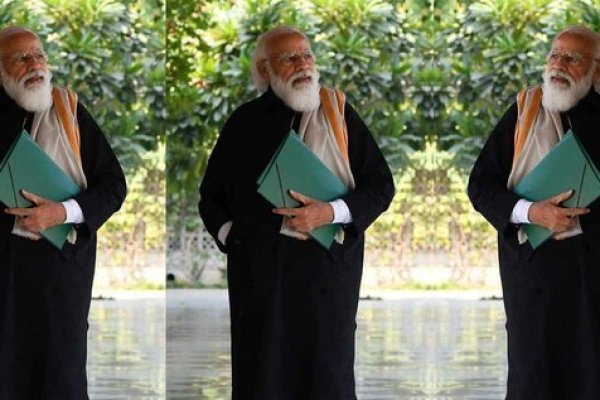 Of late, Prime Minister Narendra Modi isn’t giving much importance to political rhetoric he played upon, not too long ago, that is his “56-inch” chest. Clearly, he is well aware that this may not help turn the political tide in his party’s favor in forthcoming assembly elections. There is no denying, the Indian premier has proved himself to be a master strategist in promoting his image. When he first decided to step onto the national stage, he gave great importance to his “secular” mask. The mask was apparently considered important to diminish negative opinions held about his role as chief minister when Gujarat-carnage hit the state.

During his first term, to enhance his personal image, he tried his hand at his dress-styles, hug-diplomacy, clicking selfies, holding a broomstick, washing sanitary-workers’ feet, and various other moves. Ahead of the 2019 elections, he played upon the anti-Pak card, the Kashmir-issue, triple-talaq law, and succeeded once again.

With assembly elections in West Bengal not too far off, Modi appears to be going overboard in trying to look like Nobel Laureate Rabindranath Tagore (1861-1941). The big question is, to what degree can this exercise of promoting varying images of oneself, in the quest of winning voters, really succeed? After all, when images seem to be manufactured, they can succeed to a certain degree and not forever. Besides, questions are likely to be raised on different images of oneself being promoted within less than a decade.

Here, one is tempted to state that the political field is not a stage where politicians can choose to change their appearances and perform before the voters speedily. In this age of today, voters are not simply viewers of what is going on in the political world. A testimony to this hard reality is the ongoing protest of farmers against certain agricultural laws. The same may be said about the protest at Shaheen Bagh. Both these protests prove that people assert their voices as critics of the government’s measures, which they feel are detrimental to their interests. Can “manufactured images” compel people to change their attitude towards issues they are concerned about? Maybe, they can get to a certain degree, but chances of their having the same impact for too long a time are minimal, particularly if they (images) lack credibility. This point is supported by the same person choosing to don different masks within too short a period of time.

Certainly, each politician has the right to promote his/her image as part of the electoral campaign, enhance his/her image, win the support of people, gain media attention, and various other reasons. Here, attention may be drawn to other politicians, also using tactics to promote their images. Most of the most popular tools used by most are wearing regional dresses identifying themselves with the area; they hail from. This refers to a dress style, particularly dhotis worn by H. D. Deve Gowda, M. Venkaiah Naidu, P. Chidambaram, Mulayam Singh, Lalu Prasad, and a few others. This tradition is changing with younger ones opting for kurta-pajama. Besides, what is notable is that these have retained their specific styles. Numerous politicians have for long used a certain dress, which is now strongly linked with their identity. This may be said of style and color of saree worn by Mamata Bannerjee, salwar-kameez by Mayawati, Uma Bharati’s saffron dress, Chandrababu Naidu’s safari-suit, the shirt-pant by Arvind Kejriwal, and so forth.

Whether in politics or any other field, each individual has the right to dress and present the image he/she desires through his/her attire. If it is a question of livelihood for those in the entertainment industry, religious considerations for others, the professional necessity for many, regional binding, or various reasons may prompt others for their respective dress-styles.

The dress also acts as a communication tool, an attempt to convince the targeted audience of a certain image being promoted by the user of the dress. Usually, the message conveyed by the dress is easily understood by people at large. Not surprisingly, most Indian politicians try and dress like people at large and/or specifically in keeping with their regional identity.

Now, from this angle, what can be said about Prime Minister Modi’s new attire? And herein lies a communication lapse. In all probability, voters in West Bengal are fairly familiar with the attires earlier used by him. He is not a new entrant in the political field. They probably are also well aware of his regional roots, western India. It is not the question of East being East, West-West. But that of the same state’s intellectual and ideological inclinations was not similar to what was displayed by Gujarat in 2002.

Tagore was a multi-faceted personality, against extremism that led to communalism. It was not without reason that he expressed views against rigidity leading to social bias devoid of core principles of humanity and openness. He viewed extremism as a “communal motive” used by “interested groups led by ambition and outside instigation” for “destructive political ends.”  Now, can hair-style, beard, and dress in keeping with the identity of Tagore win over hearts, minds, and votes of Bengalis?

It is difficult to say, at this point, whether Modi’s command over shrewd tactics will always enable him to remain ahead of his rivals in the political race. Undeniably, Bharatiya Janata Party (BJP) electoral gains are least likely to be decided by images used by any political leader. Rather, prospects of their being based on alliances and divisions within anti-BJP parties cannot be ignored. In other words, BJP’s political victory has, to a certain degree, rested on weak communication strategies exercised by opposition parties. Although BJP swept the 2019 polls, it must be remembered that it won less than 40% votes. Whatever be the image manufactured for electoral campaigning, it never is permanent, about which voters are becoming more and more conscious. Manufactured images can gain attention and media-coverage but not win votes.

Media bubbles resting on manufactured news don’t take too long to burst. Just as manufactured/fake news retains “credibility” only for a short period, the same may be said about manufactured images!