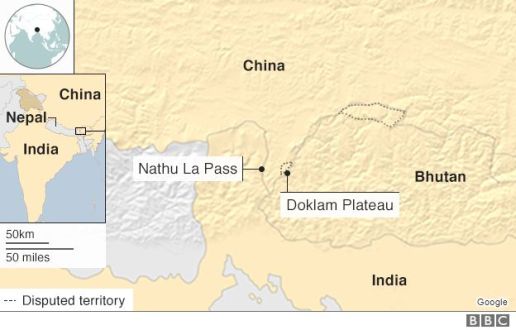 For the last four weeks, Dokalam area near the Bhutan Tri-junction has become a strategic hotbed for the unarmed and propaganda conflict for India and China. The deadlock is over the construction of a road by the Chinese in Dokalam area. It all started when a Chinese road construction party was questioned by the Indian troops in that disputed area.

Doka La, which is the Indian name for the region is also supposed to be the last military post for India. Irrespective of having any diplomatic ties with China, Bhutan is engaged in talks with the Chinese officials for the resolution of the matter. India has openly accepted that they have blocked the Chinese road construction to maintain the status quo and security balance in that area. Bhutan is supported militarily and diplomatically by India as part their signed accord for long; it becomes Indian responsibility to counter any Chinese aggression in that area.

Way before the war of 1962 with India, China has been claiming Dokalam as its territory since early 1950’s. In October 1959 Soviet premier Nikita Khrushchev had supported Nehru over border disputes with China in a meeting with Mao, and after the Goa incident of 1961, China started self-assuming that India, Soviet Union, and the USA all have expansionist views on China. This led to the Chinese aggression since then. China had made a policy of keeping the border disputes alive for long.

China has been using its state controlled media to spread its propaganda throughout the globe. The status of free media in China is questionable, and the experts on India affairs are only propagating the Chinese aggressive and expansionist views by completely ignoring the accurate facts and sometimes don’t hesitate to distort the history in their favour.

The way “Global Times” puts the things on the table will only worsen the situation between the two countries. India is China’s biggest import partner and contributes significantly to its GDP. Even a little embargo on Chinese goods will cost it dearly. Sneaking into the Indian Ocean on the name of guarding the merchant ships and opening up naval bases in Africa is already posing a threat in the south Asian region.

Supporting and collaborating with a nation which harbors terrorists and spreads terrorism indicates that China wants to continue its anti-India policy. China has border disputes with over six countries and maritime disputes in the South China Sea, yet it always uses to put allegations on other nations for being expansionist. China will gain nothing by collaborating with a fallen state rather it should cooperate more with India and try to resolve the things peacefully to grow and prosper together along with the territorial harmony.