In the dock and on the ropes. The conviction of Khaleda Zia hobbles Bangladesh’s opposition

Just in time for elections at the end of the year 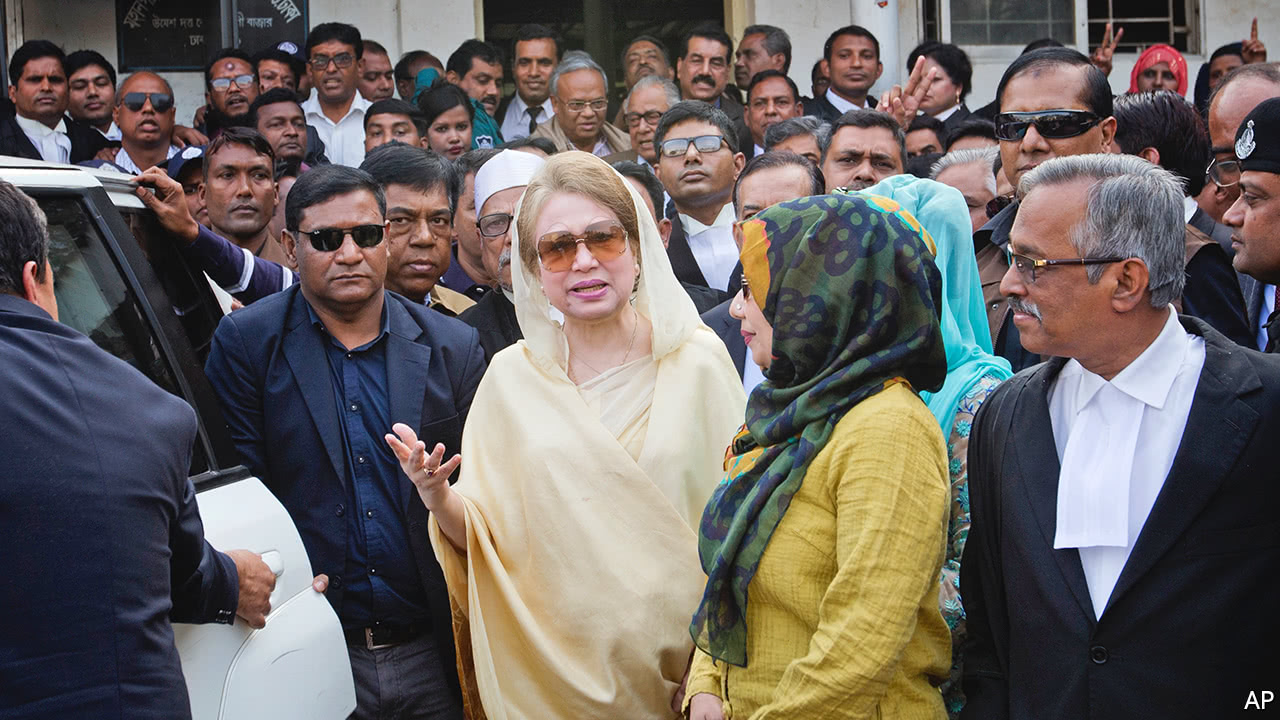 KHALEDA ZIA has been in and out of the courts for over a decade. She has been charged in 37 different cases, most concerning corruption or abuse of power during her two stints as prime minister, in 1991-96 and 2001-06. But the verdict reached on February 8th was momentous.

It was Mrs Zia’s first conviction, for stealing cash in 1991 from a trust for orphans founded in memory of her late husband, Ziaur Rahman, a coup leader who became president before being killed in a coup himself. Mrs Zia, who leads the Bangladesh Nationalist Party (BNP), currently in opposition, was sentenced to five years in jail. Although she may yet be freed pending appeals to the High Court and the Supreme Court, her fate appears sealed.ap and unheralded

The verdict formalises the collapse of Bangladesh’s two-party system and the demise of the Zia dynasty. The BNP and the Awami League (AL), the party currently in power, used to alternate in government. Mrs Zia and Sheikh Hasina Wajed, the prime minister and leader of the AL, were known as the two begums—the two powerful women who towered over Bangladeshi politics. But Mrs Zia’s power has been waning for the past decade, as first an army-backed government and then two AL ones bombarded her with lawsuits. The BNP’s boycott of the most recent election, in 2014, in protest at the AL’s alteration of the constitution to avoid handing power to a politically neutral caretaker government during the vote, left it without a single MP.

The BNP’s slogan used to run, “Khaleda Zia is our leader. Ziaur Rahman is our philosophy. Tarique Rahman is our future.” But Mrs Zia is 72, is in ill health and, as a result of the verdict, may not be able to contest future elections. And Tarique Rahman, her son and political heir, is in exile. He, too, faces multiple criminal charges related to his mother’s second term, which saw Bangladesh ranked as the world’s most corrupt country five years running.

The verdict comes just a week after Sheikh Hasina announced that a parliamentary election would be held in December. No one imagines she has any intention of losing. In 2014 she put Mrs Zia under house arrest and confined Mohammad Ershad, an ageing former dictator and leader of the third-biggest party, to an army hospital. The courts barred Jamaat-e-Islami, a religious party allied to the BNP, from taking part since the constitution defines Bangladesh as a secular state—another change the AL had pushed through parliament.

Yet the government would like the BNP to take part this time to prevent the election from looking as farcical as that of 2014, when less than half the seats were contested. The Election Commission says the BNP’s participation is needed to hold a meaningful vote. Even the AL’s otherwise silent backer, India, has publicly called for “participatory” polls.

In theory Mrs Zia has no choice: the law stipulates that her party must participate or be deregistered. The ruling party can also offer inducements such as plum government jobs and the dropping of lawsuits. The BNP, or parts of it, Dhaka’s chattering classes assume, may prefer a respectable block in parliament to political oblivion.

For the moment, however, the BNP is unyielding. On February 3rd its top brass affirmed that it will boycott the election unless it is held under a neutral government. As if to prove their point, the government arrested more than 1,100 BNP leaders and activists this week. It also put up checkpoints to keep opposition protesters out of the capital, Dhaka. BNP grandees have warned that the crackdown and conviction are weakening moderates in the party and emboldening those who advocate violence against the government.

That won’t scare Sheikh Hasina much. She faced down bombings and arson at polling stations in 2014. And she has been careful to butter up the army, doubling its size over the past ten years and building it lots of new bases. It is hard to see how she might be dislodged.