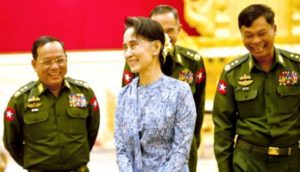 Myanmar (formerly known as Burma) has been ruled by military dictators for a long time. In today’s world it is difficult for such a military government to stand at par with the governments of other civilized democratic countries. As the time went on, pressure started mounting on the military government in Myanmar to change. There was uproar from all corners of the world demanding the release of Ang San Suu-Kyi, the pro-democracy leader under house arrest. Ms Suu-Kyi was awarded a Nobel Peace Prize for her non-violent struggle/ movement for democracy. World leaders started going to Myanmar and meeting the imprisoned leader for democracy. The military junta now realized that they were more or less isolated and they had to do something about it. They hastily drafted a constitution and got a referendum on it. They also released Ang-San Suu-Kyi and allowed a general election. People of Myanmar approved the constitution because of only one reason – something better than nothing. But the military would not allow a total return to democracy. They made sure that Suu-Kyi can neither become the head of the state or the head of the government (because she had married a foreigner). They made sure the one-third of the seats in the parliament is kept reserved for the armed forces so that the constitution can never be altered or modified. They kept a surprising provision in the constitution that the defence and interior ministry will be headed by armed forces personnel. Suu-Kyi’s party won a land-slide victory. This proved to the world at large as to how popular she was. In a way the military was defeated. That was the weak point for the military. Suu-Kyi should not have agreed to form a government and should have continued her struggle for total democracy. With support at home and abroad, she would have brought total victory for the people. This should have been the final defeat for the military.

That was not to be the case. The military leaders held a series of meetings with Suu-Kyi. God knows better what they told Suu-Kyi, she surrendered to the lure of immediate glamour. She formed a government in conformity with the constitution. Nothing changed. The military still runs the country. Rather they now got the benefit of doing so under a so-called democratic government. Suu-Kyi is helpless – very much a toy in the hands of the military. She has become their spokesperson. She is trying to support what the military has so far done and also trying to shield the military against all blame.

Military governments all over the world would like to divert people’s attention to problems other than those relating to democracy. The military junta in Burma (now Myanmar) created two such issues to keep public attention diverted away from democratic movements. They were Kachin and Karen fighters in the North-East and Rohingyas in the South-West. In the days of the Kingdom of Arakan (long before Arakan was annexed by Burma), substantial Muslim population from the then East Bengal (mostly from Chittagong region) migrated to Arakan and settled there. When the military took over the reign of Burma, these Arakan Muslims were already well settled there. They were more prosperous than locals and most of the business belonged to them. That is why it was easy for the military to incite the locals (majority Burmese Buddhists) against the Rohingyas – as if the locals would become rich overnight if they could get rid of the Rohingyas. The military succeeded in creating an enmity and rift between the two communities. With the support of the majority Buddhists, the military introduced a Nationality Act in 1984 in which they tactfully stripped the Ro- hingyas of their nationality. The Nationality Act was followed by a number of harsh and cruel actions against the Rohingyas. Since 1984 the Rohingyas are not allowed any business permit or licence. Because of government restrictions neither the state (including the local government) nor any private employer would employ them. They are not allowed to open any new bank account. Their children do not get admission in state run schools.  Rohingyas do not get any state run hospital or medical facility. Inter-racial weddings are forbidden and they cannot get married unless prior permission is obtained. It is also believed (I am not very sure) that Rohingya couples required government approval for taking any children. They were totally isolated and outcast. Out of need for basic necessities they started selling of their land and other properties at whatever price they could get. As the days went on for the Rohingyas it was a question of survival. They survived by cultivating small plots of land they still had and by helping each other. Some worked illegally for Burmese employers for whatever wages the employers gave.

The younger generations of Rohingyas grew up without any education or skill. Instead of contributing to the economic growth of their home land they became a liability to the state. They also remain a liability to any country that happens to accept them as new immigrants. In their own home land Myanmar they are routinely subjected to torture and harassment. They still remained there because they have no place to go. It was at this stage that Ang San Suu-Kyi became the so-called head of the civilian government. By then about three hundred thousand Rohingyas fled from Myanmar and entered Bangladesh.

Bangladesh was delighted to see Suu-Kyi coming into power. It looked forward to a solution of the Rohingya crisis. But it was not to be. The eye wash democracy had very little power for the civilian government. Besides, Suu-Kyi had personal reasons to dislike the Muslims.  It is known that during her student life in Oxford she had a Pakistani Muslim friend. She was in love with him. The Pakistani fellow achieved tremendous academic success and returned to Pakistan later to become a top diplomat and civil servant. Suu-Kyi only obtained a degree without any distinction and hurriedly married Michael Aris trying to forget about her unsuccessful affairs with the Pakistani. When the BBC reporter Mishal Hussain turned up for Suu-Kyi’s interview, she said, “I knew about a BBC reporter but did not know about a Muslim journalist”. This clearly shows her bitterness towards the Muslims. In her new role Suu-Kyi was trying to please her military masters. The military expected her to support its action and hide the atrocities. As State Counsellor it became her primary duty to support all military actions and work in total harmony with the military. Just to convince the world that Rohingyas were never treated badly she appointed a commission with Mr. Kofi Annan as its head. Mr. Annan was persuaded in the best possible way to give a report to cover up the misdeeds of the military junta. Mr. Annan, former secretary general of the United Nations is a man of principle and he would not compromise for anything. He refused to white-wash and cover up the misdeeds. He exposed all the truth. That was a serious blow to the military junta in Myanmar who still held the real power.

On 25th August 2017 as Mr. Kofi Annan was addressing the press conference to outline the findings of his commission, the Myanmar military started its new offensive against the Rohigyas. It was in fact their vengeance against Annan report. Their military operation is officially to crush the ARSA (Arakan Rohingya Salvation Army), an imaginary armed wing of the Rohingyas. This way they could justify their action at home and abroad. They attacked villages one after another killing all young men, raping all the young women and then burning down their home and belongings. The rising smoke was clearly visible from across the border in Bangladesh. The local Buddhists thugs joined in the operation. They looted whatever came their way. The innocent Rohingyas ran for their lives – another 800,000 of them entered Bangladesh. By the end of the year the total number of Rohingya refugees in Bangladesh n