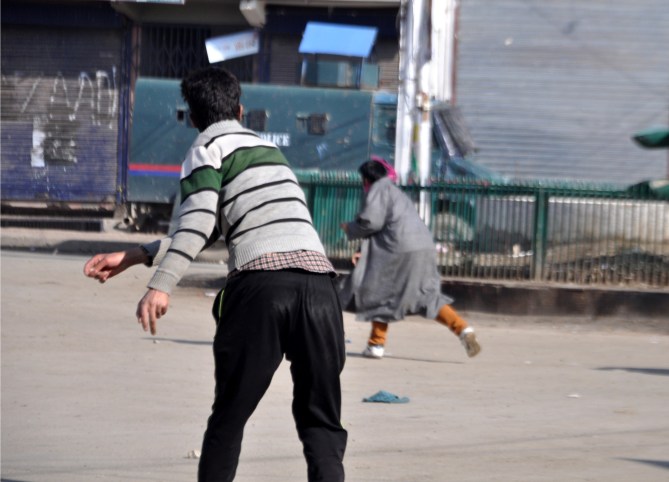 Local youth clash with security forces near Jamia Masjid, a mosque in Shopian of South Kashmir India, on February 2, 2018 after Friday prayers. Against Recent Civilian Killings In The Area. By Tawseef Nazir. SHutterstock  Stock photo ID: 101561680

Nowadays, whenever we hear the word ‘debate’, our brains get accumulated with furious commotion. In Indian TV debates, no one listens to anyone; everyone speaks up simultaneously without listening to each other, without clear information and identification of what the problem is, how can there be any solution that is acceptable to all stakeholders? And frankly, none of these busybodies active on Kashmir have ever given a cogent and coherent definition of the problem, much less a solution.

Usually, the debates are meant to put your view politely, humbly wait until the time when your view is being answered thoroughly, but it is not the case with Indian TV debates.
When any Kashmiri journalist or any other Analyst is invited by these “hypocritic channels,” in a mean time when a Kashmiri say that, Kashmir is a political problem that needs a political solution, there is a need for a ‘one-time political settlement’ to the ‘political issue.’

Let me say frankly, how do these anchors define this problem without knowing the real fact of debates, Is the ‘political problem’ actually ethnic, religious, or linguistic Or is it, more than anything else, psychological. But unfortunately, a normal man watching television can only hear the crowded voice of the panelists- nothing else.
If it insists on the continuation of the same unjust and hegemonic debates, it will spell disaster for the region. This “Hypocriticism” path has already proved to be a policy failure long back.
Yes, nowadays the panelists might have forgotten the aim of such debates, seems they only want to increase their channel TRP.

In Indian TV studios, everything is discussed- from Stonepelters to Separatists.

None of the days passes when these News Channels alleges Kashmiri panelists that they are talking the language across the border.

Instead of resolving the Kashmir dispute, the news channels summon various Pandith intellectuals who, in front of cameras sip their tea and slam each other till time gets passed. Then It’s the secondary question that solution for Kashmir issue gets merely discussed.

Both India and Pakistan are nuclear powers. It is not easy for the super political powers to adjudicate on this matter and force either India or Pakistan to do what the political superpowers think is fair.

“On the whole, media in India is playing a very negative role and is warmongering for the respective government,” Indian media is in denial mode while Pakistani media is in finger-pointing mode, both with absolutely no evidence to back up their claims.” For the Indian media, the problem in Kashmir is sponsored by Pakistan, a position taken by successive governments in India ever since the conflict began.

Media analysts see a lack of fact-checking on the part of Indian and Pakistani newspapers when it comes to the Kashmir issue. They call on mainstream media outlets in both nations to play an active role in minimizing the ongoing unrest.

The Indian media’s coverage of the Kashmir conflict has often been marred by controversy with a senior journalist of a major TV channel last year resigning after accusing the network of fabricating his reports on Kashmir. The reporter claimed that the channel had forced him to prepare biased reports favoring the Indian government’s stance on Kashmir.

I asked a question to a Senior Journalist, based in Srinagar. The continuation of the same unjust and hegemonic debates, Wouldn’t it spell a disaster for the region? He said: I beg to differ with your argument. Debates on Kashmir will always be heated-one till the day this dispute is resolved. This propaganda that debates are ‘harmful to Kashmir, blah la bla’ has been planted by Chief Minister Mehbooba Mufti and her likes including Naeem Akhter Andrabi and Waheed ur Rehman Parra who looked unnerved because the ills and evils of their government, which is seemingly crossing all limits of corruption and favoritism, get exposed through such TV debates. The ruling PDP even planted delegations before Union Home Minister Rajnath Singh during his previous visit to Kashmir to malign news debates. Such debates contribute towards a resolution to Kashmir issue because those invited from this side are given a chance to put forth their viewpoint, he said.
While as videos and images from Kashmir travel via instant messengers straight into Pakistani phones via social media and TV studios. The same events in Kashmir prompt Delhi’s TV studios target whole Kashmiris, by raising baseless allegations that Pakistan is funding Kashmiri youths to pelt stones.

Kashmir is as much an emotive public issue in Pakistan as in India. Indians, Pakistanis, and Kashmiris can break down this triangular prison and break free.