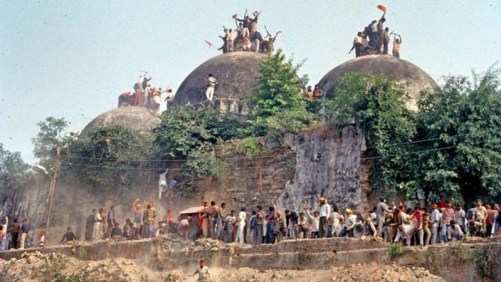 December 06 shall remain a memorable terror day in the life and future of India where majority Hindus on the strength of their numbers and governments, insult, injury and attack Islam and have also destroyed Historic Babri Mosque- a place of Islamic worship. Indian Constitution provides for free faith and religion.

Now the Babri mosque case is in the Supreme Court as Muslims look for genuine justice for their faith and mosques. Hindutva elements now control the judiciary and influence the judges to deliver pro-Hindutva judgment and save the Hindu criminals.

Hence Muslims, having no “control” or influences, are anxious and perturbed.

For Hindutva forces, the case is pure politics but for Muslims that is their faith.

Babri Masjid is a dispute between Muslims whom the Mosque belongs and criminal elements that pulled down the historic monument because they argue Hindus would decide if Muslims should have mosques and worship in their way. They even impose all fanatic measures n Muslims and others. They now want to decide what Muslims should eat and how to obey Hindutva laws. They want the judges, appointed not by Muslims but by Hindu government to obey the RSS dictates and serve the case of criminalized latest Hindutva laws.

So much so, police, military, core media and even courts favor Hindutva moorings as their favorite item.

The Hindutva BJP-RSS and allies are trying to make the Supreme Court a major party of the dispute of historical Babri Mosque, and they want the judges to express the view of Hindutva stalwarts. Allahabad split judgment shows the judges are increasingly becoming Hindutva guys to promote the RSS agenda.
.
The Congress party which still has Muslim vote bank to support them also want a Hindutva judgment so that India, claiming to be a major ‘terror victim,’ is not seen as an oppressor state.

After the long wait, the Supreme Court Chief Justice J.S. Khehar opined that long-pending dispute of Ram Janmabhoomi-Babri Masjid should be settled out of court. (March 2017) He even offered to mediate himself in the matter. Uniformly most of the spokesperson from RSS Combine elements welcomed the move as Hindutva judgment, while a large number of Muslims and others have been surprised as the Court was approached for justice and not or compromise formula.

This is in the backdrop of the judgment of Liuchow branch of Allahabad Court (2010). As per this, the three-judge bench had said that the land should be divided into three parts. As such the judgment was an exercise of sorts trying to do a “balancing act “between all the parties involved, Ram Lalla Virajman, Nirmohi Akhada and Sunni Wakf board. Fanaticism has percolated into judiciary too. The title of the land has been divided into three each sharing one part. Also, the court had declared since Hindus believe that the ‘birthplace’ of Lord Ram to be below the place where the central dome of the mosque stood, that place should be allotted to Hindus.

In response to the pro-Hindutva judgment, RSS chief in a jubilant mood had proclaimed that now the path for a grand Ram temple has been opened at the site and all the parties should cooperate in this “national” work.

Seeking to rule India forever, RSS-BJP Combine, earlier promoted by Congress party and government to insult and terrorize Muslims, uses religions like Islam as an effective political weapon against Hindus for their votes. Lal Krishna Advani took up the issue from VHP, which was agitating for Ram Temple so far not out of love of Hinduism but for Hindu communal votes. The attack on Islam sells like hot cakes in Indian communalized polity. With Advani, the President of BJP taking up the issue its political impact started deepening and widening at the same time. It was made the principal polarising issue around which consolidation of Hindu vote bank began. The mobilization for anti-Islamic Rath yatra planned for the temple movement became much more in the aftermath of Mandal Commission implementation. Those who opposed reservation for OBCs came forward in large numbers in the mobilization for Ram Temple.

This issue came up to torment the delicate thread of peace prevailing in the society He did this despite his promise to Supreme Court that he will protect the mosque. Narasimha Rao who locked himself in his Puja room as the mosque was being demolished later promised that it will be built precisely at the same spot. But the Congress party refused to keep its world given to the world. They know Muslims are weak and have no voice to claim their masque back form an arrogant Indian government.

Anti-Islamic trend included propaganda against world famous Taj Mahal which the first claimed to be a Hindu building. Of course, the RSS-BJP gang suffers badly from an inferiority complex as a monument built by a Muslim has become world famous. But now they say the wonderful Taj Mahal is an insult to Hindutva prestige as foreigners have planed that monument in Agra. In the same token Indian parliament, Presidential palace, most of the government building in New Delhi are an insult I Hindutva. The matters took a turn for the worse as BJP led team of ‘archeologists-Kar Sevaks’ tried to prove that there are remnants of Ram Temple below the mosque. Archeologically this is not tenable. That there was no convincing proof of Ram Temple underneath becomes clear from the fact the High Court Bench had to resort to ‘faith of Hindus’ to allot 2/3 of the land to Hindu groups.

The demolition of Mosque has been the biggest crime in India, and that was well planned and executed. Despite that, the leaders of demolition squad have not been punished so far. Hindutva is India and no punishment for Hindutva mongers. Even judges maybe scared of criminal communal elements in BJP, RSS.

Liberhan Commission did point out the nature of underlying conspiracy but unfortunately the Commission report, as per the Congress-RSS scheme, took long to submit its report. To add salt to the injury Advani and company became stronger after this crime against the nation. Advani became a better hero than the hero of Ramayana. The demolition, as per the conspiracy, also unleashed massive violence against Muslims, particularly in Mumbai, Bhopal, Hyderabad, and Surat along with other places.

The guilty of this planned anti-India violence have also been let off entirely or with a minor reprimand. Congress always wanted to save the RSS-BJP from any punishments because it considers any punishment for the RSS criminals is a punishment for India and Congress party themselves.

Congress that ruled India for decades since 1947 main by solid Muslim vote banks but not even once it mentioned the demolition of Babri Mosque and announced any step to rebuilding the mosque. That is the Congress party is the cause of all problems Muslims and India face today.

In fact, Congress party has forfeited its right to rule India, but unfortunately, the Hindutva communally fanatic and criminal squad has replaced the corrupt Congress.

That is the fate of India.

Congress party never supported any of the causes of Muslims but criticized them when needed for Hindu votes. It. Misused courts against Muslims. Courts are made for justice. Here, in the matter of this dispute, the ownership of the title has been the real issue. The High Court based itself more on ‘Hindutva fanaticism’ as’ Faith’ than the records of ownership of the land.

The Supreme Court as the highest legal body needs to see the whole issue from a legal angle and needs to set right the wrongs done so far. Only concrete legal aspects should determine the outcome of the case.

Congress-Hindutva pressure on the judiciary is too much. Instead of calling for compromise out of Court in present circumstances is overlooking the aspect of justice. In out of Court settlement already the Hindutva elements have said that Muslims should leave the place for Ram Temple and another suitable land will be given to them for the mosque. The two sides are not evenly balanced as far as their power is concerned.

Courts also go by majority decision and Hindus are in the brutal majority in this secular India. Not every Hindu is a fanatic, but Congress-RSS have converted many into that mode.

There are threats from the ruling BJP members of assemblies and parliament as they insult Muslims. Likes of Subramanian Swami, BJP MP and former foreign minister, and others openly threaten like street criminal gangs that if Muslims don’t give up their claim, they would forcefully build their temple structure over the Mosque and a bill will be brought to Parliament once BJP has even bigger strength.

In the out of Court settlement, the Hindu nationalists are more assertive then now after the parliament win and dominant while the representatives of Muslims are being pushed into a corner that does not augur well for the health of our democracy.

The effort to revive the issue of other mosques is unwarranted and intimidating to minorities. That needs to be stopped.

Already there are claims on so many Mosques would be converted them into temples and Supreme court offers judgmental in their favor that would only further strengthen their criminal mindset.

They would just start murdering Muslims and erasing Mosques like wild beasts.

Courts should intervene to end this dangerous situation in a democracy. Whatever that be threats of this type are immoral, all parties should be given justice. Here Muslims seek justice.