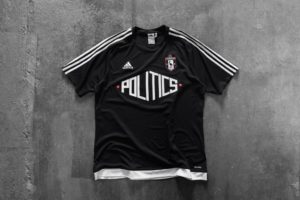 The Gulf crisis that has pitted World Cup host Qatar against a United Arab Emirates-Saudi Arabia-led alliance for the past eight months is showing up the fiction of a separation of sports and politics.

Regional and international soccer bodies seeking to police the ban on a mixing of sports and politics are discovering that it amounts to banging their heads against a wall. As they attempted in recent months to halt politics from subverting Asian tournaments, domestic and regional politics seeped into the game via different avenues.

Soccer governance bodies have long struggled to maintain the fiction of a separation in a trade-off that gave regulators greater autonomy and created the breeding ground for widespread corruption while allowing governments and politicians to manipulate the sport to their advantage as long as they were not too blatant about it.

The limits of that deal are being defined in the Middle East, a region wracked by conflict where virtually everything is politicized. While bodies like FIFA, the world soccer regulator, and the Asian Football Confederation (AFC), have focused in recent months on the Gulf crisis, Saudi domestic politics, as well as the Israeli-Palestinian conflict and the Saudi-Iranian rivalry, reared their ugly heads.

Saudi businessman Prince Alwaleed bin Talal, in one of his first public acts since being released from three months of detention in Riyadh’s Ritz Carlton hotel and in a demonstration of fealty to Crown Prince Mohammed bin Salman, donated $533,000 to Saudi soccer club Al Hilal FC.

Prince Alwaleed, who was among the more recalcitrant of the hundreds of members of Saudi Arabia’s ruling family, senior officials, and prominent businessmen in what amounted to a power and asset grab under the mum of an anti-corruption campaign, said the donation was in response to a call by the government.

Saudi authorities said they expected to collect some $106 billion in assets and funds from released detainees as a result of the campaign, yet that figure is in doubt.

“It has come as no surprise that the total haul will be a mere fraction of the sum anticipated… Authorities are only counting on the acquisition of $13.3 billion in settlements by the end of the year, equivalent to the amount of revenue the country would receive from a small increase in the oil price,” said Ambrose Carey, director of Alaco, a London-based business intelligence consultancy, who has been involved in some of the most high profile asset-tracing cases in past decades, and an expert on Saudi Arabia.

Prince Mohammed reportedly had demanded that Prince Alwaleed, one of the world’s richest men with investments in a host of Western blue chips, pay $6 billion for his release. It is not known on what terms he was set free.

Media reporting on this month’s participation of Israeli teams in a handball tournament in Doha suggested that social media criticism may have been engineered, a fixture of the Gulf crisis, that was sparked last May by fake news published on Qatari websites in a hack allegedly engineered by the United Arab Emirates. “It is not known whether the tweets critical of Doha actually originated from Qatar,” Agence France Press reported in its coverage of the criticism.

Despite Israeli athletes repeatedly competing in tournaments in the Gulf over the years, Prince Mohammed, the heir-apparent to the title of Custodian of the Holy Cities, Mecca and Medina, opted not to risk criticism by barring Israeli players from participating in a chess match in December in the kingdom.

The decision suggested that Prince Mohammed was walking a tightrope in prioritizing the kingdom’s rivalry with Iran at the expense of the Palestinian issue in his relations with Israel and the Trump administration.

Its on the soccer pitch, however, that Gulf states may hit a wall in the willingness of international sports associations to look the other way in their increasingly difficult effort to maintain the fiction that sports and politics are separate as the divide in the region spills onto the field and Saudi Arabia and the UAE seek to engineer an environment in which Qatar would be deprived of its World Cup hosting rights.

In an indication of the importance, Gulf leaders attribute to Qatar’s ability to garner soft power on the soft pitch, Dubai security chief Lt. Gen. Dhahi Khalfan suggested in October that the UAE-Saudi-led diplomatic and economic boycott of Qatar would be lifted if the Gulf state surrendered its hosting rights.

That may have been an overstatement by the notoriously bombastic law enforcement official, but nonetheless reflected thinking about the political importance of sports in Qatar and among its detractors.

The political manipulation of sports in the Gulf crisis has however prompted FIFA to closely monitor the Saudi and UAE efforts while the AFC has put its foot down in preventing the Gulf crisis from shaping the Asian Champions League following incidents in December during the Gulf Cup in Kuwait.

Pro-Qatari and Spanish media said state-controlled Saudi media had offered Bahraini players bonuses during the Gulf Cup if they “defeated the (Qatari) terrorists”. Saudi Arabia and the UAE, together with Bahrain and Egypt, accused the Gulf state of funding militants and political violence.

Saudi and UAE players and officials, moreover, refused to participate in news conferences in which Qatari media were present.

The AFC thwarted a UAE-Saudi attempt to get Asian tournament matches that were scheduled to be hosted by Qatar moved to a neutral venue. The AFC warned the two countries that they would be penalized if they failed to play in Doha or host Qatari teams.

As a result, an Asian Champions League game in Abu Dhabi between Al Gharafa of Qatar and Al Jazira of the UAE constituted the first breach of the eight-month-old boycott of the idiosyncratic Gulf state.

The AFC and FIFA’s record in dealing with the inseparable relationship between sports and politics in the Gulf is, however, at best mixed.

In a bizarre and contradictory sequence of events at the outset of the Gulf crisis, FIFA president Gianni Infantino rejected involving the group in the dispute by saying that “the essential role of FIFA, as I understand it, is to deal with football and not to interfere in geopolitics.”

Yet, on the same day that he made his statement, Mr. Infantino waded into the crisis by removing a Qatari referee from a 2018 World Cup qualifier at the request of the UAE. FIFA, beyond declaring that the decision was taken “in view of the current geopolitical situation,” appeared to be saying by implication that a Qatari by definition of his nationality could not be an honest arbiter of a soccer match involving one of his country’s detractors. In FIFA’s decision, politics trumped professionalism, no pun intended.

Similarly, the AFC has been less principled in its stand towards matches pitting Saudi Arabia and Iran against one another. Iranian club Traktor Sazi was forced earlier this month to play its home match against Al Ahli of Jeddah in Oman. It wasn’t clear why the AFC did not uphold the principle it imposed on Qatar, the UAE, and Saudi Arabia in the case of Iran.

“Saudi teams have been able to select host stadiums and cities, and Saudi teams will host two Iranian football representatives in the UAE and Kuwait. In return, Iranian football representatives should be able to use their own rights to choose neutral venues, ” said Mohammad Reza Saket, the head of the Islamic Republic of Iran’s Football Federation in a recent letter to the AFC.