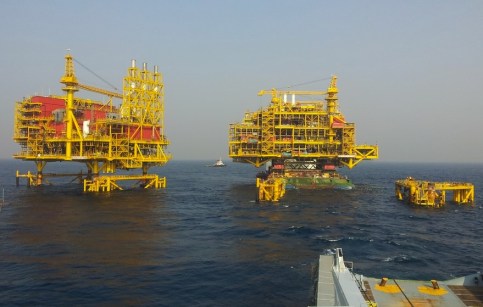 It is reported that Oil and Natural Gas Corporation (ONGC) will take control of Hindustan Petroleum Corporation Ltd. (HPCL), as part of Government of India’s plan to create an integrated public sector oil entity, comparable in size and turnover with global oil companies.

It is reported that ONGC’s exploration functions will be integrated with HPCL’s refining and distribution capabilities.

ONGC is an organization that was created and built over the years with the primary objective of conducting gas exploration operation and production of natural gas and crude oil. This goal is laudable since gas exploration is an important activity and the organization should be entirely focused on it without diverting its attention.

ONGC has turned out reasonably good performance over the years, though there could have been some shortfalls on certain occasions. Now, ONGC is remaining largely focused on its core activity of oil and gas exploration.

Just like ONGC, HPCL has been built with the objective of operating refineries and producing downstream petrochemical products. HPCL, which owns and operates two major refineries in Mumbai and Visakhapatnam, has India’s largest lubricant unit and second most extensive pipeline network of 3,015 km, apart from a vast marketing network.

The efficiency, profitability and operational success of both these organizations should be evaluated and judged individually, by assessing their performance in the core activities.

In the case of both ONGC and HPCL, the task is far from complete, and they have enormous scope for carrying on with their core operations to reach new heights.

The government of India’s decision to bring HPCL under the control of ONGC and vertically integrate the operations of the two companies appears to be guided by the following reasons.

Exploration Company + petroleum refining/petrochemical producing company will add to the strength of the balance sheet of the combined entity. This would provide the combined entity new opportunities to improve their competitive muscle power, help them compete globally in bidding for assets and facilitate in raising capital, as otherwise, they are too small individually compared to global companies.

HPLC under the control of ONGC will reduce the volatility of earnings of the combined entity. This is one of the primary reasons for the vertically integrated structure of the major global companies. When gas and oil prices go up, exploration company benefit and when prices go down, the petroleum refining company benefit.

Also, the capital expenditure of exploration companies tend to be immense with long gestation period, but oil refining companies/petrochemical producing companies have much better steady cash flows, particularly in a growing economy like India. Therefore, every business will strengthen the combined entity.

Views of the critics

Some analysts think that the above stand of Government of India should not be accepted at face value. There is a need for careful investigation of the soundness and pros and cons of the decision, particularly considering the ground realities in India and the experience in operating the large capacity plants with vertically integrated structure.

There can be different viewpoints whether one vertically integrated company should do the entire operations all by self or the operations should be split among the various groups having various activities in similar field with one company complementing the other company’s functions.

There are also strong arguments for outsourcing the products and services to the extent feasible by the companies, who may wholly focus on only the core areas, instead of placing all the eggs in one basket. This is an emerging trend all over the world.

Both ONGC and HPCL are public sector companies under the control of Government of India, and both can coordinate their activities well whenever needed for their mutual benefits as well as the interest of the country since ownership of both the companies is same. Therefore, the merger of the two companies is not necessary for coordinating their activities.

Gas exploration activity and operating refineries cannot be considered as similar operations. There is no specialization that ONGC can bring to HPCL neither in its operation nor vice versa.

Can integrating such reasonably successful companies, who are concentrating on their chosen area of activity which is different, be adequately justified by cost-benefit analysis, considering several uncertainties in the Indian and global context?

Such plans to bring HPCL under the control of ONGC may please the financial analysts and corporate planners who may like to experiment with a new approach based on global models. Decentralized activity may lack the raw appeal that centralized mathematical models possess. But, there is grim possibility that these steps may end up as an exercise in futility, in case that it would not happen as per expectation. In such case, both HPCL and ONGC would suffer heavily, which HPCL and ONGC, as well as the country, cannot afford.

Critics opine that such `strategic move’ is a calculated risk.

The government of India’s move to bring HPCL under the control of ONGC is virtually a decision to merge both the companies, sooner or later.

Similar efforts have been initiated recently by Government of India to merge subsidiary banks with State Bank of India, providing almost same justification that is now being advanced for making ONGC and HPCL be one entity.

While the merger of subsidiary banks with State Bank of India can be justified to some extent since their operations are largely similar, this is not so in the case of ONGC and HPCL.

Many global oil/gas companies are involved in both oil and gas explorations and refinery operations, often as a result of diversification/acquisition in the natural process of expanding the business’s operations. In the case of most companies, vertical integration has not happened after merging two independently operating successful companies, as in the case of the present proposal to bring HPCL under the control of ONGC.

Globally, in the case of mergers and acquisitions, instances have been seen of employees of the merged companies having “cultural stress,” which may be due to the nature of activities carried out by them in the past and challenges faced. Such conditions have caused deep fissures.

One should also keep in view that in the global context, there have been instances of two companies merging their activities and later on deciding to split and re-emerge as separate companies due to the several insurmountable problems faced.

In any case, it appears that Government of India is proceeding with this massive critical decision without encouraging debate amongst people with first-hand experience in the field and considerable, knowledge gained due to the long years of exposure to the field in various capacities. It is necessary to ascertain the views of such experts, who may not be part of government machinery, regarding the pros and cons. On the other hand, the move of the Government of India gives an impression that it is treating such decision as if it is a mere bureaucratic exercise that can be taken in closed quarters, without involving technologists and professionals.

There are many knowledgeable people with considerable experience and expert views, who should be heard in the larger interest of the country, before taking such critical decisions.