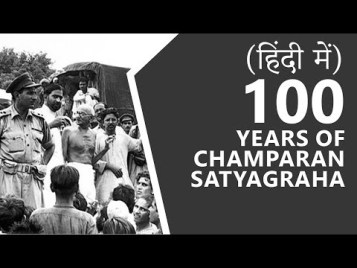 Indeed, Champaran Satyagraha marked the emergence of Mahatma from M. K. Gandhi wherefrom began a new era in India’s freedom struggle. During those days when popular protests were repressed by brute force unleashed by the British government, the strategy of peace and non-violent persuasion in Champaran proved to be highly useful as it discouraged the English rulers from resorting to barbarity against the agitators.

With Mahatma Gandhi’s approaching martyr day very close to observe, everyone is reminded of his immense contribution towards selfless service of humanity suffering the agony and trauma of utter ignorance, poverty and wretchedness and also violence, injustice or inequality of all kinds all over the world. And that moved Gandhi’s inner core which motivated his pious self to jump into fulfilling his lifelong mission for alleviation and uplift of these millions as he could feel the inner throe of their hearts. While he was working in South Africa towards this end but his deep passion for service of own motherland brought him back to India where he began with this utter desire to serve the hapless millions. And the farmer’s agitation in Champaran against various forms of prevailing injustice provided him the necessary opportunity to practice his noble ideas into action wherein he proved to be very successful. In fact, the Champaran peasant movement was a part of the wider struggle prefixed for independence. When Gandhiji returned from South Africa, he wanted to experiment with his first-ever non-cooperation satyagraha, as a limited endeavor, by providing leadership to the infant peasant agitations at Champaran in Bihar and later at Kheda in Gujarat. Although these struggles were taken up as reformist movements yet the underlying rationale was to mobilize the peasants towards their genuine demands meant for their survival. Indeed, Champaran Satyagraha was based on an insistence on ‘truth and non-violence,’ along with persuasive strategy. It was organized as a peaceful movement in total contradiction with the violent peasant uprisings in the past. Fortunately, the movement received massive support from some of the prominent leaders of the country viz like Rajendra Prasad, Brijkishore Prasad and Muzharul Haq who constituted the progressive intelligentsia of the then India. This provided strength and a constructive direction to the movement. Can’t it become a role model again in today’s world fraught with never-ending macabre violence and global terrorism?

In the early 19th century, European planters had set up indigo farms and factories at Champaran, in North Bihar. After that, they forced the local cultivators to enter into the tinkathia system, which stipulated that out of 20 khatas which make an acre, they had to dedicate three khatas exclusively for indigo plantation. Though the peasants (bhumihars) of Champaran and other adjoining areas of Bihar were growing the Indigo under the tinkathia system, they had to lease this part in return to the advance at the beginning of each farming season and adding further to their woes, they were compelled to sell their crops at a throwaway price which was fixed on the area cultivated by them rather than the crop produced. When the demand for indigo in the international market began to fall with the arrival of German synthetic dyes, the European planters passed the burden of losses over these cultivators, besides raising rents and extracting other illegal dues from them lest they close producing indigo. As Indigo plantation had been destroying the fertility of their soil they had nothing but to protest against such unjust farming. Consequently, the planters used illegal and inhuman methods of indigo cultivation upon the poor peasants while forcefully subjecting them to an extremely inadequate remuneration. Further, these planters demanded a heavy price from the peasants instead of relieving them from the lease contracts. Thus, as a whole, they were bitterly cheated by the planters and the overall situation had become very horrible as well as pathetic which compelled a noted writer and documentary-maker D.G. Tendulkar to write: ‘The tale of woes of Indian ryots, forced to plant indigo by the British planters, forms one of the blackest in the anals of colonial exploitation. Not a chest of Indigo reached England without being stained with human blood.’

Against this backdrop, an enlightened peasant in Champaran, Raj Kumar Shukla who was also suffering this highhandedness, managed to persuade Gandhiji to survey the area to stand up for the cause of the exploited peasants. Hence Gandhiji and his supporters visited extensively through villages, while listening to their grievances, and recording their horror tales of repression. Thus Gandhiji could understand the inhuman misery and brutal savagery which these peasants had been suffering from in the Champaran. Hence their miseries were discussed thread-bar at the annual conference of the Bihar Provincial Congress Committee on 10th April 1914, which concluded that the Champaran peasants were suffering their worst. And that again motivated the Provincial Congress Committee in 1915 to recommend for a constitution of an inquiry committee to assess the woes of the Champaran peasantry. As the issue had drawn countrywide attention by then, the Indian National Congress, in its Lucknow session in 1916, also discussed the Champaran case to decide on immediate remedial measures for them.
Hence, Gandhiji chose to represent the peasants’ cause and initiated the Champaran peasant movement which was launched in 1917-18. Its objective was to create awakening among the peasants against the widespread exploitation by the European planters. On 14th May 1917 Gandhiji wrote a letter to the District Magistrate of Champaran, W.B. Heycock, wherein he showed his deep concerns about the sufferings of peasants at the hands of landlords and also the government of the day. The peasants opposed not only the planters but also zamindars, as they were equally brute and oppressive for the peasants though Gandhiji wanted to normalize their mutual relations. Meanwhile, a Champaran Agrarian Committee had already been constituted by the government, with Gandhiji as one of its members. As pressure mounted against such exploitation and the recorded statements of about 8,000 peasants testified the ruthless exploitation and barbarity, the government had to accept Gandhiji’s suggestion of abolishing the tinkathia system. The European planters had to sign an agreement granting more compensation and control over farming to these poor farmers and cancellation of revenue hikes and collection until the famine ended. Furthermore, the planters were asked to refund 25 percent of the amount they had illegally collected from the peasants as enhancement of dues.

Thus the Champaran satyagraha became a grand success and turned to be a powerful tool of civil resistance in ensuing India’s freedom struggle. The psychological impact of this Satyagraha was outstanding as it aroused firm belief in truth and non-violence among the suffering peasants of Champaran and also among the countrymen as well. Indeed, the satyagraha proved to be a great morale booster to not only Gandhiji – which made him a global symbol forever – and the Champaran peasantry but became an icon of the peaceful and non-violent struggle for the whole nation and also the whole world. In fact, this icon is the only option even today for the survival of innocent humanity bearing the brunt of ever-recurring gruesome violence and various forms of terror, besides innumerable temporal pains and physical difficulties in every nook and corner of the world.