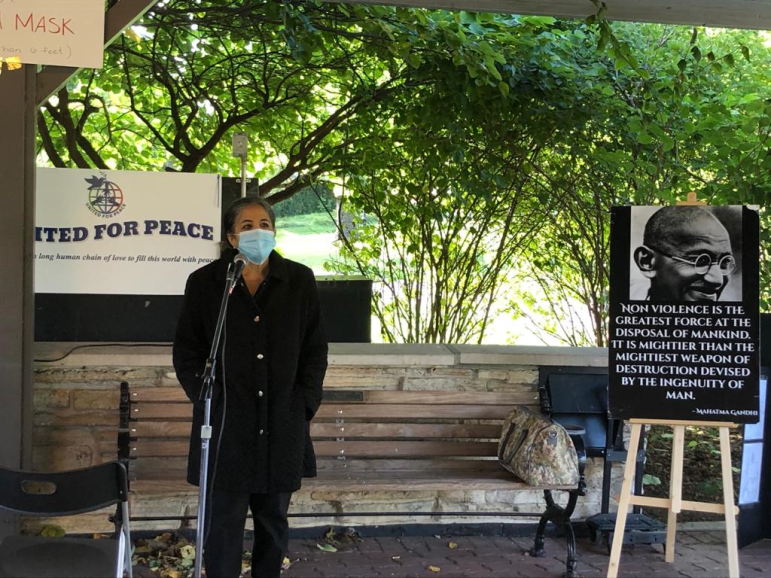 United for Peace Coalition of peace and interfaith organizations from all across Chicagoland area held a Gandhi Nonviolence Rally in Naperville IL, on Oct 2, 2020, a day that has been designated as the International Nonviolence Day by the United Nations, in honor of Mahatma Gandhi’s birthday.  The hosting organizations included United for Peace, Non Violence works, Unity Partnership, Diversity Diners & Gandhi 150 Commemorative Stamp Initiative.

Coalition members felt that at this turbulent time in our nation’s history, when we are witnessing increased polarization and violent clashes in our cities, it is important to reinforce the principles of nonviolence and equal rights espoused by Gandhi in India’s freedom movement from British Colonial rule, and adopted by Martin Luther King in the civil rights movement in the US.

The outdoor event was attended and addressed by many elected representatives- Illinois State Senators Laura Ellman & Ram Villivalam, Naperville City Councilman Benny White, Aurora Alderman- Sherman Jenkins, Hanover Township trustee-Khaja Moinuddin and several others. Congressman Raja Krisnamoorthi send a written statement.  He mentioned that in honor of Gandhi he had introduced a bipartisan resolution with other members of Congress to observe this day as the International Day of Nonviolence in The US. He said “It is a comfort to know that Mahatma Gandhi’s teachings continue to inspire countless people around the world, protesting for the right to equality, fairness and justice for all…’in a gentle way you can shake the world’…I challenge you to shake the world”.

Introducing the United for Peace Coalition, Shalini Gupta President of United for Peace said-  “We work with all peace and interfaith organizations because if our mission is the same, we are stronger together.  We want the collective voice for peace to be louder and stronger than the lobby for hate, guns and war machinery.”

Regina Brent of Unity Partnership explained how MLK drew inspiration from Gandhi, and the role of nonviolence in the fight for racial justice. For the nonviolence ideology- Christ was the visionary, Gandhi was the engineer, and MLK was the builder, said Philip Bradley from Non Violence Works. Maria Pike Board member of Everytown for Gun Safety, Chicago Survivors, Moms Demand Action talked about the violence that took her son’s life and continues to take lives of so many young people in Chicago. “Two families were destroyed-The shooter is in jail and I live in the jail of my daily grief”.

Faith leaders from Christian, Muslim and Hindu faiths talked about the role of nonviolence in their religions.   Pastor Moses from Hope Presbyterian Church, Wheaton opened the program singing the song- “All we need is love”.  Debra Scarlett Parks closed the program, enthralling the audience with her songs- “Just Right” and “We Shall Overcome”.

Photos of the non-violence rally