From Doklam To Tibet 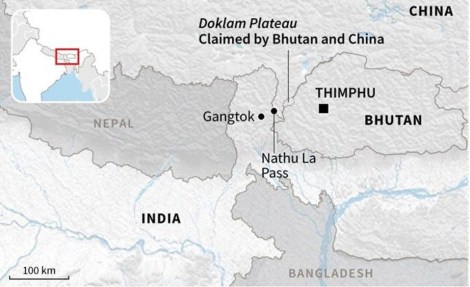 As the Doklam standoff ended last week, observers were left wondering what the legal circumstances of the situation is, including the international legal status of Tibet. Even the large online Wikipedia encyclopedia added a section titled “Tibetan sovereignty debate” which was last edited on August 27, 2017.[1]

Sources in the U.S. government expressed their concern for the sovereignty of Bhutan and called on all sides to respect international law.[2]

Several issues are addressed in this paper:

Legality of India’s Presence in the Doklam Plateau

As per Article II of the Indo-Bhutanese Friendship Treaty (2007)[3]; “Neither Government shall allow the use of its territory for activities harmful to the national security and interest of the other.”

Bhutan considers the Doklam Plateau to be part of its nation. Therefore, the presence of Indian troops in the area with the consent of the Royal Government of Bhutan is legal and does not compromise Bhutan’s sovereignty.

The military standoff between India and China was due to China’s “expansionist” mind state.

Regardless of the fact that the Doklam Plateau is claimed by two nations, Chinese intentions in this matter follow precedents of similar illegal moves such as constructing artificial islands in the South China Sea[4], refusing to follow the Permanent Court of Arbitration (PCA) ruling on the dispute with the Philippines[5], etc.

Strategic Chinese actions to disregard international law raise geopolitical risks for all nations in the region, not just India despite China positioning nuclear facilities in Tibet.[6]

China’s Offer to Negotiate the 1890 Convention

The second item is straightforward. The “Convention Between Great Britain And China relating to Sikkim and Tibet (1890)” [7] did not include India or Bhutan as parties to the treaty as both were under occupation by the British Empire. India inherits the treaty but negotiating it would mean that the territorial integrity of India with regards to Sikkim is up for negotiations as well.

Perhaps of most interest to the international community is the topic of Tibetan independence. It is well known that human rights in Tibet are being violated by Chinese authorities.[8] Despite this, the Central Tibetan Administration (CTA) and His Holiness Dalai Lama are not seeking independence but self-rule.

The 1890 Convention did not establish that Tibet was a part of China as there is no provision in it which implies this, but rather relates to Sikkim’s territorial integrity.

The subsequent “Convention Between the United Kingdom and China Respecting Tibet (1906)”[9] also do not expressly state or imply that Tibet is a part of China. Rather, Article II of the 1906 Convention states; “The Government of China also undertakes not to permit any other foreign State to interfere with the territory or internal administration of Tibet.”

The only treaty which states a relationship between Tibet and China is the “Convention Between Great Britain, China and Tibet: Simla Accord (1914)”.[10] However, this treaty is null and void due to material changes.

Article II of Simla Accord states that Tibet is under the “suzerainty” of China, but China will not make Tibet a province or interfere in the internal matters – which it has.

Furthermore, international legal experts such as Prof. Eckart Klien who was heard before the External Affairs Committee of German Parliament as an expert on Tibet argued that “suzerainty” does not forfeit sovereignty, but refers to a dependency between two nations.[12] This definition is also one that fits the version that the English Oxford Dictionary offers.[13] In other words, this Convention allows for an independent Tibetan state under the protectorate of China.

This “suzerainty” ended after the Tibetan Government forced the evacuation of Chinese troops in 1911, as the Manchu Dynasty fell. While the “suzerainty” was ended, Tibet also ceased to be a part of Chinese territory since it fought for its own independence. As mentioned, the 1914 Simla Accord is no longer in effect as per norms of treaty law. If one were to claim that this treaty is still in effect; China must cease to make Tibet its province as it is in violation of Article II and terminate the 17 Point Agreement as it in violation of Article V.

When an independent Tibet was invaded by the People’s Liberation Army (PLA) in the 1950’s and the 17 Point Agreement was signed, China was still not a signatory to The Hague Conventions or Geneva Conventions.

Many scholars have pointed out that it is an “invalid” treaty since the Tibetan representatives were threatened with their lives and were not allowed to contact their superiors before signing. While the “Vienna Convention on the Law of Treaties (1969)”[15] is not retroactive, the doctrine of duress is embedded in basic contract/treaty law and customary international law so any court of law must terminate the agreement.

An option to formally terminate these agreements is to request private ad-hoc tribunals to increase attention on this matter before it is brought up at the U.N. The Kingdom of Hawaii, also not a member-State of the U.N., was a party before litigation[16] at the Permanent Court of Arbitration (PCA) by citing trade agreements from the 1800’s under the relevant provisions of the United Nations Commission on International Trade Law (UNCITRAL).[17] The Court ruled that the Kingdom of Hawaii existed as an independent nation and its representatives were able to persuade the U.S. Government to establish “government-to-government” ties with the Native Hawaiian people.[18]

Border agreements between India and China only demarcate where India ends, but does not mention the status of Tibet. The “One China Policy” stipulates that Tibet is a part of China, but as a measure of foreign policy as it is not legally binding.

Considering the delay by the Chinese government to sign the relevant international legal treaties which are not retroactive, null/void status of the 1914 Simla Accord, and the duress when Tibetans signed the 17 Point Agreement; Tibet cannot be considered a nation under “occupation”, but rather one that is still legally independent with the right to self-determination.

*Dr. Parasaran Rangarajan has several years of experience as an analyst and adviser who has consulted for numerous governments at the United Nations. He is a scholar from Harvard University and Editor-in-chief for the International Law Journal of London. He is also an analyst in SAAG.He can be reached at parasaran@gmail.com.