For Half A Million Rohingya Fleeing Myanmar, Bangladesh Is A Reluctant Host

For Half A Million Rohingya Fleeing Myanmar, Bangladesh Is A Reluctant Host 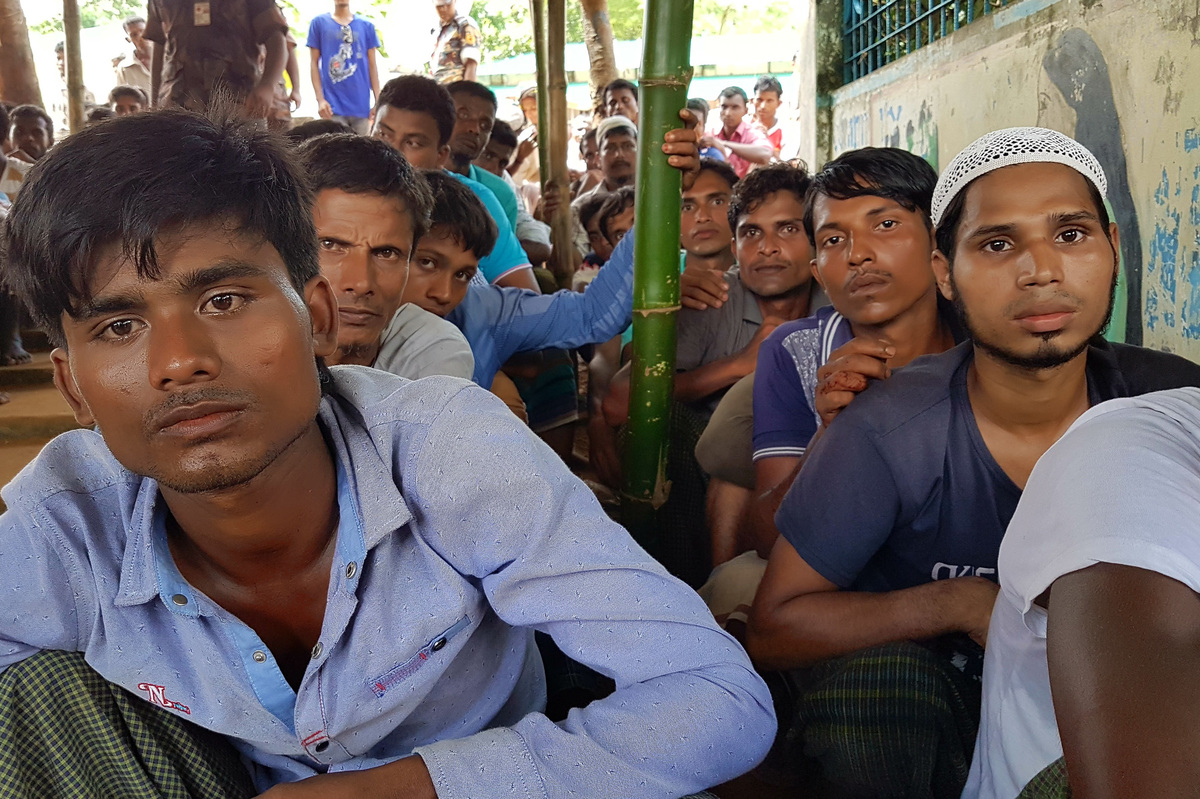 Bangladesh is struggling to accommodate 500,000-plus Rohingya who have poured across the border in less than two months. It isn’t recognizing them as refugees and would prefer to see them repatriated.

537,000: That’s the number of Rohingya who have fled Myanmar for Bangladesh in the past seven weeks, according to the U.N.

It’s the largest migration of people in Asia in decades. The Rohingya are fleeing a campaign of terror by the Myanmar military and Buddhist vigilantes, something the U.N. has called the world’s “fastest developing refugee emergency” and a “textbook example of ethnic cleansing.”

It’s not the first time this has happened. Members of Myanmar’s mostly Muslim Rohingya minority have been fleeing military crackdowns for decades — as far back as 1978, and as recently as last October and November, when the military launched “clearance operations” after a series of attacks by Rohingya militants on security outposts in Rakhine State. Similar attacks in August prompted this latest wave of rape, murder and arson, entire villages torched by security forces and Buddhist vigilantes. PHOTOS: Intimate Pictures Capture The Pain Of The Rohingya

Bangladesh reckons about 800,000 Rohingya are now living on its side of the border. Most are in overcrowded, spontaneously erected camps, staying in shelters that amount to little more than bamboo poles strapped together with a bit of plastic sheeting for a roof.

Even before the latest wave of arrivals, Bangladesh was uneasy with the number of Rohingya in country. Now it’s trying to do something about it.

“We need to know for accountability how many Rohingyas come to our country,” says Maj. Kazi Obaidur Reza, with Bangladesh’s border guards.

He supervises the registration effort at the Kutapalong camp, just a few miles from the border. Hundreds of Rohingya line up patiently in the hot sun, waiting for their temporary IDs. Inside, it’s a flurry of activity. Registration takes place at the Kutapalong camp, just a few miles from the border. Michael Sullivan for NPR hide caption 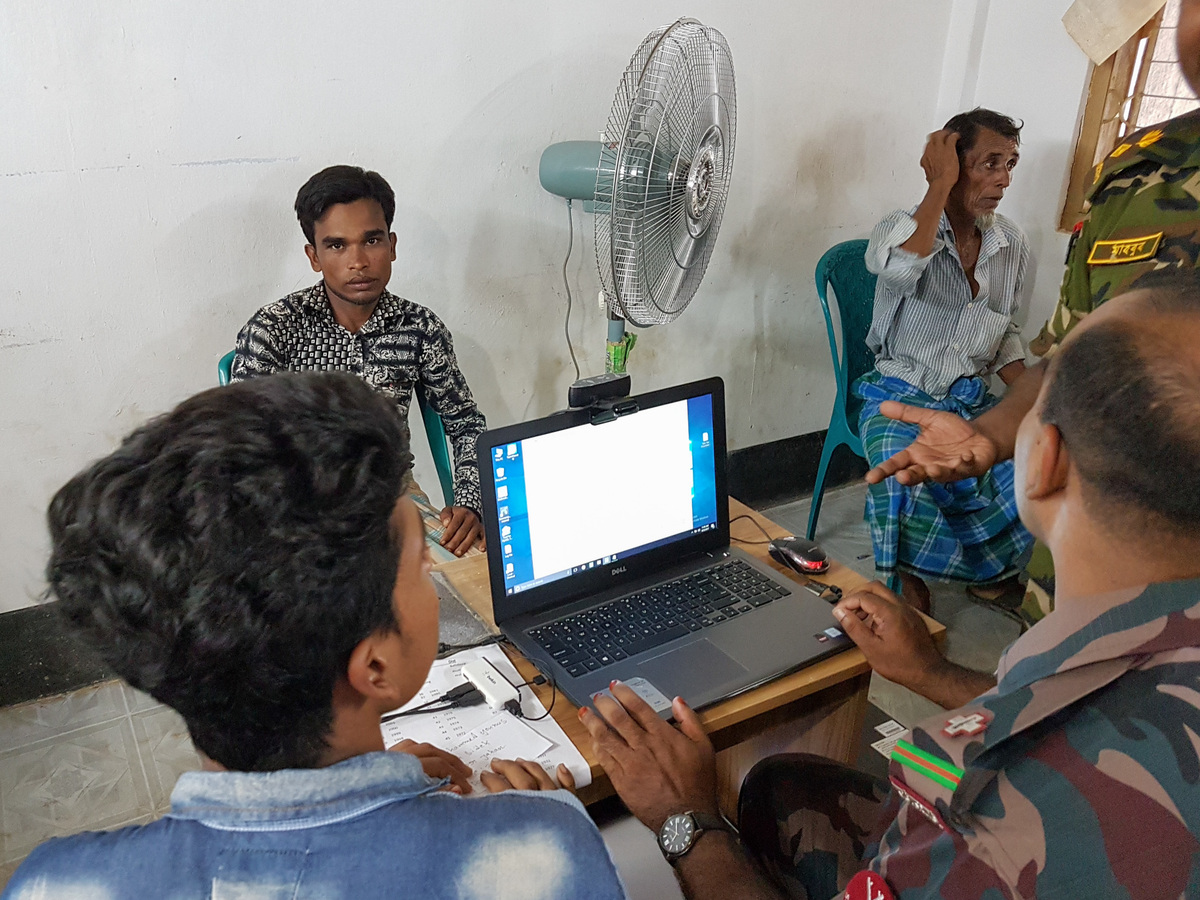 Registration takes place at the Kutapalong camp, just a few miles from the border.

“We are taking photographs; they are giving biometrics of all fingers and they are getting this card where all documents are written — from where they come, date of entry into country, date of birth, mother’s name — so we can easily identify all of them,” Reza says.

This procedure is not just for the new arrivals, he says, but for all the Rohingya who have come at one time or another from the other side.

Many Rohingya are getting something they never had in Myanmar — an official document that acknowledges their identity.

Rashid Ulla, a rail-thin 35-year-old from Myanmar’s Maungdaw township, proudly shows me his. Under “Nationality,” it says “Myanmar Rohingya.”

“I’m happy to have an ID that says I am Rohingya,” he says.

Back in Myanmar, the government doesn’t use the word — it doesn’t consider the Rohingya citizens.

But the Bangladeshi IDs aren’t permanent. And the Rohingya aren’t recognized officially as refugees. Bangladesh is wary of getting stuck with them permanently.

“And that matters,” says Peter Bouckaert, emergencies director for Human Rights Watch. “They’re being given a camp residency card, which basically gives them access to food rations. But Bangladesh is still very far away from recognizing them formally as refugees. And that matters, because if they’re not registered refugees it means that they don’t have access to education. They have very limited ability to move around.”

That ability is getting more limited every day. At a checkpoint just down the road from the Kutapalong camp, about a dozen Bangladeshi police, their rifles slung over their backs, are flagging down buses, cars and auto rickshaws, looking for Rohingya. Those they find get turned back to the informal camps where they came from on the Bangladeshi side of the border.

Police official Hasanuzzaman Mollah says this is one of 11 checkpoints on the road from the border to the Bangladeshi city of Cox’s Bazar.

“Our purpose is to restrict their access into Cox’s Bazar or beyond,” he says, as one of his men boards a bus to check the passengers. “We cannot allow them to disperse throughout our country.”

It’s a security issue — and a political one as well. Some of the Rohingya who have been in Bangladesh for a long time have been accused of involvement in the smuggling and drug trades. Rohingya Refugees Pour Into Bangladesh, And Many Question A Militant Group’s Actions

In this part of the country, it’s an economic issue too. Though the Rohingya aren’t allowed to work or go to school, some find jobs under the table — mostly in the construction or building trades, where their legally ambiguous status means employers can pay them less than they’d pay Bangladeshis.

This has created resentment among residents, though overall, there is public support and Bangladeshis — rich and poor — have greeted the latest influx of refugees with generosity.

Security officials and some independent analysts, however, do worry that Bangladesh’s own Islamist extremists — some with ties to transnational terrorist groups — will try to exploit new arrivals.

“One of my big fears now is that a lot of these groups with ties come in and pick off recruits from these [Rohingya] communities,” says security analyst Elliot Brennan, an Australia-based independent researcher who specializes in Myanmar and Southeast Asia. “Maybe not taking them to Myanmar, but taking them back to different areas and as a result, we have a general recruitment body as the situation deteriorates in the camps and the people become more desperate.”

In the meantime, some religious hardliners in Muslim-majority Bangladesh are stirring the pot. Some are calling to arm the Rohingya. Others are even talking about war with the Buddhist majority neighbor.

That is creating more political problems for a government already overwhelmed by the sheer number of new arrivals. Bangladesh’s preferred option is for the Rohingya to be repatriated, to live safely back in Myanmar. Prime Minister Sheikh Hasina told the U.N. General Assembly last month that the U.N. should set up and police “safe areas” inside Myanmar for that very purpose. Rohingya refugees walk through a shallow canal after crossing the Naf River to reach Bangladesh on Monday. The U.N. has said that 537,000 Rohingya have arrived in Bangladesh over the past seven weeks. They are fleeing violence in Myanmar’s Rakhine State, where the United Nations has accused troops of waging an ethnic cleansing campaign against them. Munir UZ Zaman/AFP/Getty Images hide caption 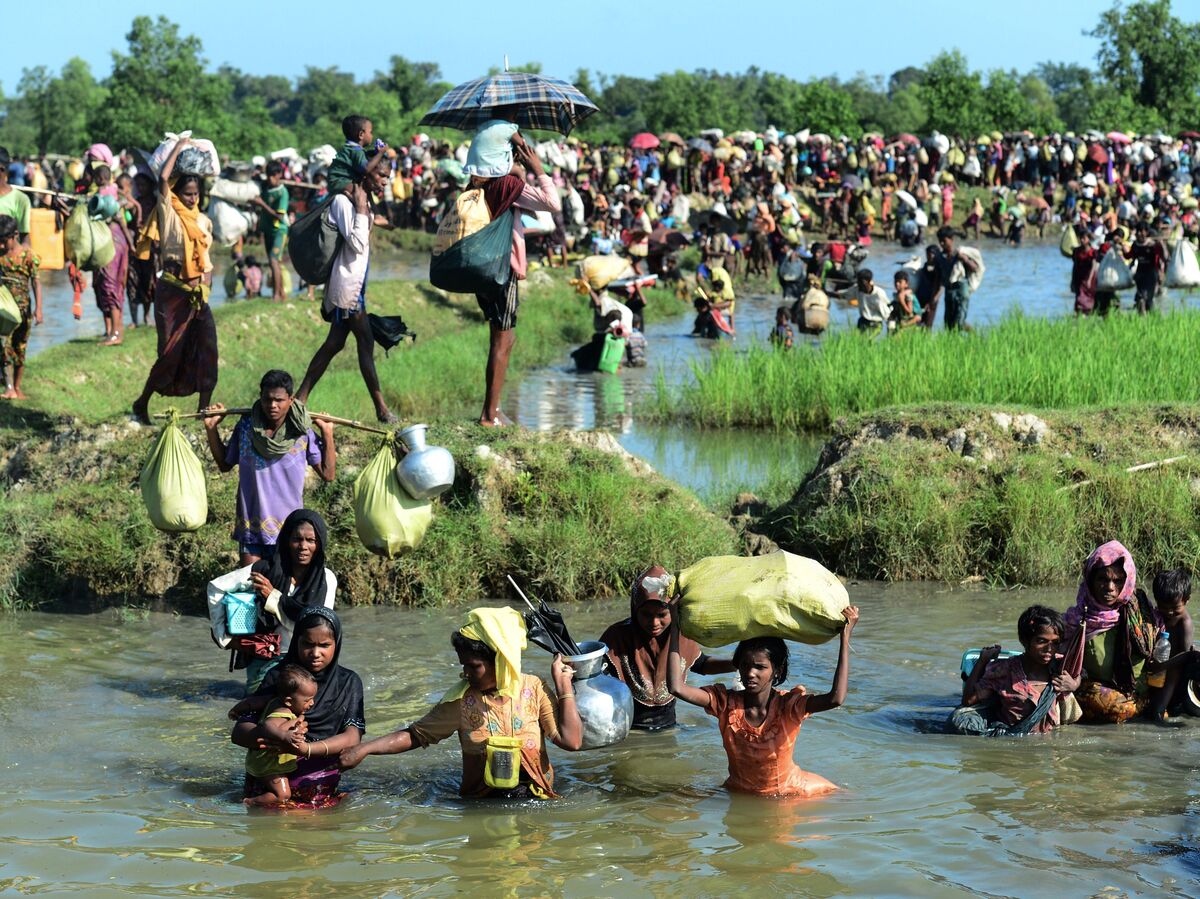 Rohingya refugees walk through a shallow canal after crossing the Naf River to reach Bangladesh on Monday. The U.N. has said that 537,000 Rohingya have arrived in Bangladesh over the past seven weeks. They are fleeing violence in Myanmar’s Rakhine State, where the United Nations has accused troops of waging an ethnic cleansing campaign against them.

That doesn’t look likely. And it’s highly unlikely the Rohingya will even be allowed — or want — to return after the horrors they’ve been subjected to.

So for now, Bangladesh is hosting them. But there may be a limit to its patience. The government is setting up a new megacamp that will encompass many of the existing informal camps that have sprung up in the past several weeks and decades. All the Rohingya in Bangladesh will be required to live there, and only there.

“When you concentrate too many people into a very small area, particularly the people who are very vulnerable to diseases, it is dangerous,” Watkins warned. “It is much easier to manage people, manage the health situation and security situation if there are a number of different camps rather than one concentrated camp.”

Bangladeshi officials are adamant, however, that the new camp is the best solution to ensure its own security and that of the Rohingya. Human Rights Watch’s Bouckaert, like Watkins, is not convinced.

“If Bangladesh wants to contain people in camps, first of all they need to respect their rights,” he says. “But secondly, they also have to provide the humanitarian assistance, the education, the health assistance that people need to survive. And that is simply not the reality we see today.”

The reality today is more urgent for both Bangladesh and its humanitarian aid partners: simply finding enough food, water and adequate sanitation for the new arrivals.

How they’re treated once that’s sorted out is another matter. And Bangladesh is the only country that has taken the Rohingya in. Nobody else has offered to share that burden.

The artcile appeared in