As national election nears, women say they deserve a greater role in guiding the country 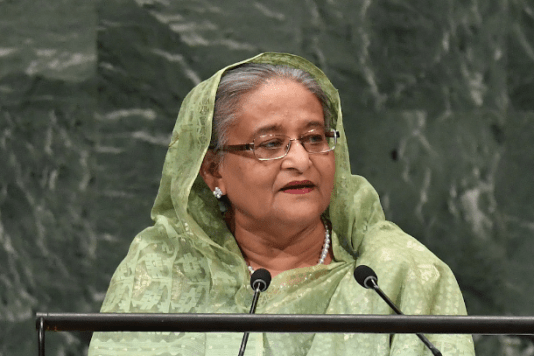 Bangladesh’s Prime Minister Sheikh Hasina speaks at the United Nations in New York on Sept. 27. Despite having a female PM, Bangladesh remains a male-dominated society, particularly in politics. (Photo by Angela Weiss/AFP)

With an eye on the national election next month, female Bangladeshi politicians have called for better representation of women in parliament and an empowered role in policymaking.

Bangladesh will hold an election on Dec. 30, the Election Commission said on Nov. 12. It will be the 11th poll since Bangladesh won independence from Pakistan in 1971.

About 10,000 candidates are seeking nominations from major political parties including the ruling Awami League, the oldest and largest political party, and the Bangladesh Nationalist Party (BNP), the second-largest party.

The Jatiya Sangsad (National Assembly) has 350 seats including 50 reserved exclusively for women. It currently has 18 female MPs who were directly elected.

During a seminar in Dhaka on Nov. 13, some 50 women politicians from major parties including the Awami League and the BNP alleged that parties tend to give women minor posts which deny them direct involvement in the decision-making process.

“Women are still being treated as women, not as people, by all political parties,” Selima Hossain, a former minister and BNP vice-chairman, told the seminar, reported the Dhaka Tribune newspaper.

“I have been holding a reserved seat for the past two terms and I appreciate its existence, but it is not wise to think that women cannot be directly elected in constituencies,” Awami League MP Sofura Begum said.

Dipika Samaddar, a Baptist Christian who is seeking an Awami League nomination from Barishal-2 constituency in southern Bangladesh, had similar views.

“An MP elected directly is entitled to great honor, rights and public support to work for better changes in society, which MPs holding reserved seats cannot expect. The world has changed and women in Bangladesh too. They deserve better political representation for the good of the country,” Samaddar told ucanews.com.

Depriving women of better representation is a result of a patriarchal mindset, said Rita Roseline Costa, convener of the Women’s Desk at the Catholic Bishops’ Conference of Bangladesh.

“Women have come a long way in terms of their contributions in the society, the state and the world. In developed countries women have a better role in policymaking, but in a male-dominated society like Bangladesh women are seen as inferior to men. Their role in leadership is limited and often ornamental,” Costa told ucanews.com.

“A competent woman can serve people equally to a man. Our nation can only prosper if we can ensure women are allowed to play their role in society properly.”

“As of today, women in Bangladesh go through various forms of discrimination starting from birth. Often their potential remains suppressed amid an unfavorable atmosphere,” Khan told ucanews.com.