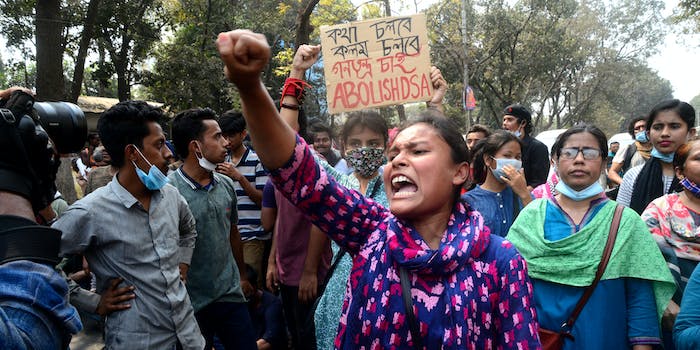 People are being held without bail for things they post online.

On April 11, 2021, authorities arrested Ahsanul Banna Tamim, a sociologist from Bangladesh’s southwestern Magura town. He is one of at least 890 individuals found guilty under Bangladesh’s Digital Security Act (DSA) since the start of 2020, which some 2,000 Bangladeshis have been accused of violating.

Tamim was charged under sections 25 and 31 of the act, which criminalize publishing anything intending to “affect the image or reputation of the country” or “create unrest or deteriorate the law and order situation.” His latest Facebook posts were deemed to have violated the DSA

“I have never written anything false against the government. I used to write for [the benefit of] ordinary people,” Tamim told the Daily Dot. “My writings should only bother those who are corrupt or [those] close to the government who are involved in various crimes in the country. Some members of the Bangladeshi Chhatra League [BCL] did not like my writing. They also threatened and intimidated me,” he added.

The BCL is the student wing of the ruling Bangladesh Awami League (AL), which has been in power since 2009. The AL’s founder, Sheikh Mujibur Rehman, led the Bangladeshi independence movement and his daughter, Sheikh Hasina, is now leading the party and ruling the country.

Members of the BCL sat alongside law enforcement officials in the police van when Tamim was being taken to the court. Tamim then spent 220 days in jail, only being released on bail by the high court on Nov. 17.

“I initially thought that I would get the bail in a day or two, but I was informed that the law has been made so that even if someone is innocent, he will not be granted bail for a while,” Tamim said.

At least 14 offenses are rendered unbailable by the vaguely worded Digital Security Act. This includes any perceived breach of section 25, which is explicitly being used to silence critique of the government, under the guise of preventing the “spread of confusion” or protecting the “image of the country.”

The DSA evolved from the Information and Communication Technology (ICT) Act 2006, which was amended in 2013. Global rights groups, such as the Human Rights Watch, have been critical of the AL government arbitrarily clamping down on online dissent using the ICT. Many locals believe that after 13 years in power, the Sheikh Hasina regime is becoming increasingly autocratic, and now want to speak up against the government’s silencing of critique and contradictory viewpoints.

Instead, they’re being swept up in police vans for Facebook posts.

This crackdown has especially targeted political opponents at a time when the AL managed to sideline the major opposition party, the Bangladesh Nationalist Party (BNP), through graft cases and rigged elections.

The DSA is now taking the suppression to gory proportions, with the U.S. also expressing concern over the law. The DSA empowered state authorities, already aligned with the ruling party, to arrest anyone without a warrant. It’s led to even minors being incarcerated. Critics of the government are now synonymous with enemies of the state. Many in custody have been tortured.

Dissident writer Mushtaq Ahmed, who was arrested under DSA over his criticism of Bangladesh’s handling of the COVID-19 pandemic, died in custody last year. Ahmed had condemned the government’s policies during the second COVID-19 wave in the country. Cases doubled after his death as Bangladesh witnessed its deadliest wave.

Meanwhile, financially crippled media houses have been rendered incapable of challenging government autocracy. Photojournalist Shafiqul Islam Kajol went missing in 2020 and was then charged with three cases under the DSA. On June 8, the editor of the online news portal pahar24, Fazle Elahi, was arrested under the Digital Security Act.

The draconian digital law has not just stifled media freedom, but also silenced ordinary citizens who use social media to exercise their right to voice their opinion. According to data collected by the Centre for Governance Studies, almost 11% of people targeted by the government are students.

At the start of this year, there were a total of 49 million social media users in Bangladesh, which has a population of 164 million; 93% of the users are on Facebook, which is also the platform overwhelmingly referred to in DSA cases. Many Bangladeshi students believe that social media, especially Facebook, long a realm for young thinkers, writers, and activists, has been earmarked to quash any semblance of challenge to the government.

“[The Digital Security Act] is undermining our freedom of speech. [The dissenters] cannot freely express their own viewpoints, let alone criticize the government,” Deen Islam, a final year student at the University of Chittagong said to the Daily Dot.

While Article 39 of the Constitution of Bangladesh safeguards freedom of speech, it can impose restrictions to safeguard “state security” and “public order.” With a tumultuous past mired in military rule, Bangladesh’s democracy and correlated freedoms have increasingly been dented by its two dominant parties, the AL and the BNP. The state’s growing autocratic tendencies have been usurping the digital sphere in recent years.

“Literally anybody can file a case against us—be it the police or anyone affiliated with the government. Someone can easily file a case of defamation even if I merely post ‘I am not well today,’” Islam said.

The students say that in addition to members of the Bangladeshi Chhatra League hunting down online dissenters and then preying on them with threats of violence or extortion, the Rapid Action Battalion (RAB)—the anti-crime and anti-terrorism unit of the Bangladesh police—has been rendered a militant wing of the ruling party.

“Students and teachers have been arrested, persecuted, and abducted by the RAB all over the country for criticizing the government or the prime minister Sheikh Hasina,” says Islam.

Even officials affiliated with the government witnessing its highhandedness are similarly worried about their own future in case they refuse to bow down to the orders of the state.

“Public administration sectors basically work in favor of the government. They are playing a role [in silencing the citizens] by complying with the government and arresting, suppressing the people and helping the government in an autocratic way,” a source close to the Bangladeshi government said to the Daily Dot.

The source reveals that much of the government’s focus is on maintaining political imbalances skewed in its favor so that any opposing voices aren’t allowed to get access to power.

“[Maintaining] an undemocratic election system is top [of the government’s list]. The government tries hard to grab [on to] the power as long as they can. Because they know if a fair voting system is launched, they will lose,” they added.

The government, however, insists that the much-criticized DSA doesn’t need any changes, and continues to be used to curtail online crimes, not to silence critique. Law Minister Anisul Haq conceded that while the DSA has been abused “to some extent,” steps are being taken to streamline arrests under the law so as to ensure that it remains limited to tackling cybercrime.

Critics and activists, however, argue that those most vulnerable to cybercrime and marginalization online are not sufficiently protected by the government. Since last year, a farmer named Abu Zaman has been on the run after being charged under the DSA over a social media post, even though he reportedly cannot read or write and doesn’t own a smartphone. Zaman’s family insists he was framed over a land dispute, as the government makes internet users increasingly vulnerable to the DSA being used as a pretext to settle personal scores.

“With Hasina in power for so many years, it is turning into a Putin-like authoritarian regime. [The DSA] could be used for protection of those targeted online. But it is never used for good purposes,” social worker Nusrat Jahan said to the Daily Dot.

Jahan claims that despite the law, women continue to remain vulnerable to online harassment. “[Women face] obscene comments about their dress, character [and] all types of explicit sexual comments, especially those from the entertainment industry. Women who speak against gender or other norms frequently get death and rape threats. Revenge porn-related blackmailing is also a phenomenon,” she added.

Similarly, religious minorities like the Hindu community continue to be targeted. At least 3,679 attacks have taken place against the local Hindus since 2013, with last year’s riots leaving the community in fear. Initially announced as protest against the visiting Indian Prime Minister Narendra Modi, the violence swiftly turned anti-Hindu with temples vandalized by the increasingly appeased Islamist groups.

“In the most recent riots, many Hindu people were falsely accused of attacking Islam, and in all cases, social media was used. But [there has been] complete blind eye to the sermons bashing other religions and threatening [minorities]. Like everywhere else in the Muslim world, the anti-Hindu sentiment is getting out of hand,” said Nusrat Jahan.

And it may only just be the beginning.

This week, the government finalized the draft of its Regulation for Digital, Social Media and OTT Platforms and submitted it to the high court. The regulation bars any digital content that threatens the “unity, integrity, defense, security, or sovereignty of Bangladesh.” Critics feel this is the next step towards limiting public access to information against the government’s interest, with the growing fear that this regulation, combined with the DSA, would mean a virtual blackout of alternative viewpoints from both local and global sources, practically outlawing freethinking.

Meanwhile, Ahsanul Banna Tamim, the sociologist arrested under the DSA, has created a new Facebook profile and purchased a new cell phone and SIM card. After being released on bail, he has been asked to appear in court every month as his case lingers on and Tamim continues toning down his online presence.

“They can cancel my bail any time they want and send me back to jail, if they feel that I am still dissenting or that I am in any way a threat for the government,” he says.