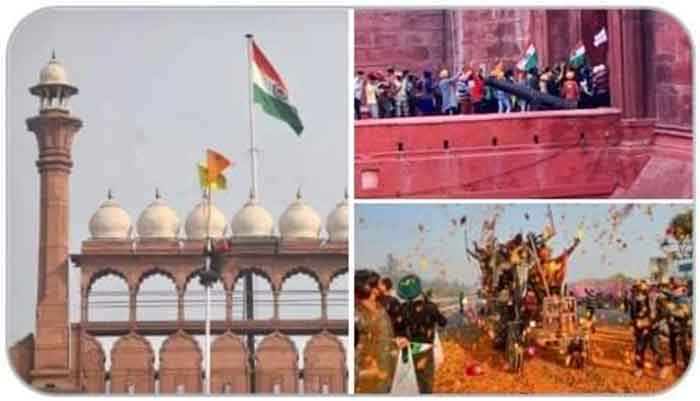 There were violent clashes between farmers and the police. One farmer died, allegedly in police firing.

Police used tear gas on groups of farmers and resorted to baton charge as protestors broke past barricades with tractors at different border points and did not take the pre-decided routes for their march in the national capital.

The Delhi Police had given permission to farmers protesting the three farm laws to hold their tractor parade on selected routes only after the official Republic Day parade on the Rajpath concluded.

However chaos ensued as some farmers were adamant on heading towards central Delhi.

In the morning, groups of protesting farmers camping at Singhu and Tikri border points of the national capital broke police barricades to force their way into the city.

The ITO resembled a war zone as restive crowds of farmers and uniformed security personnel could be seen in the area. Police fired tear gas shells at hundreds of farmers.

At Nangloi Chowk in west Delhi and at Mukarba Chowk farmers broke cemented barricades and police used tear gas to disperse them.

Ralleys were held across India in solidarity with the agitating farmers.

Senior journalist Geeta Seshu said in a Facebook post, “So the farmers breached the barriers and hoisted their own flag on Lal Qila. Lots of hand-wringing on mainstream television channels about the ‘capture’ of Red Fort by this one act. Lots of references to the violence, along with the repeated airing of visuals of broken barricades. But what I don’t get is the continuous reference to shame. Why is there no shame about the farmers who killed themselves over the last two months and at the unilateral passage of laws that sound the death knell to their livelihood and very existence?”

Dear fellow Indians, please don’t spread ‘anti-India, neoliberal-crack-addict & imperial-puppet’ BJP’s disinformation:
? Indian Tricolour was always flying afloat at the Red Fort; it was not brought down. A Gurdwara Nishan Sahib flag was put up on an empty pole.
? There was no force / violence committed by the farmers, except to remove barricades and blocks.
? Most of the tractors displayed the Tricolour and many of those who stormed the Red Fort were also carrying the National flag.
? Today’s historic day was an assertion of democracy and people power against an anti-people government’s fascist oppression and pro-corporate policies which have put millions of lives in jeopardy, uncertainty and chaos.
? The real deal is the inspirational revolt to force the regime to repeal the farm laws; it’s not about hoisting of flags.

No No this is not Singhu, Tikri or Gazhipur
This is Bengaluru Farmers protesting in favour of #HistoricTractorParade as they can’t join them in Delhi.#FarmersProstests pic.twitter.com/J7byffSSIC