Even for Rohingya refugees who move on from Bangladesh, life is grim

Malaysia and Pakistan do not provide much of a welcome 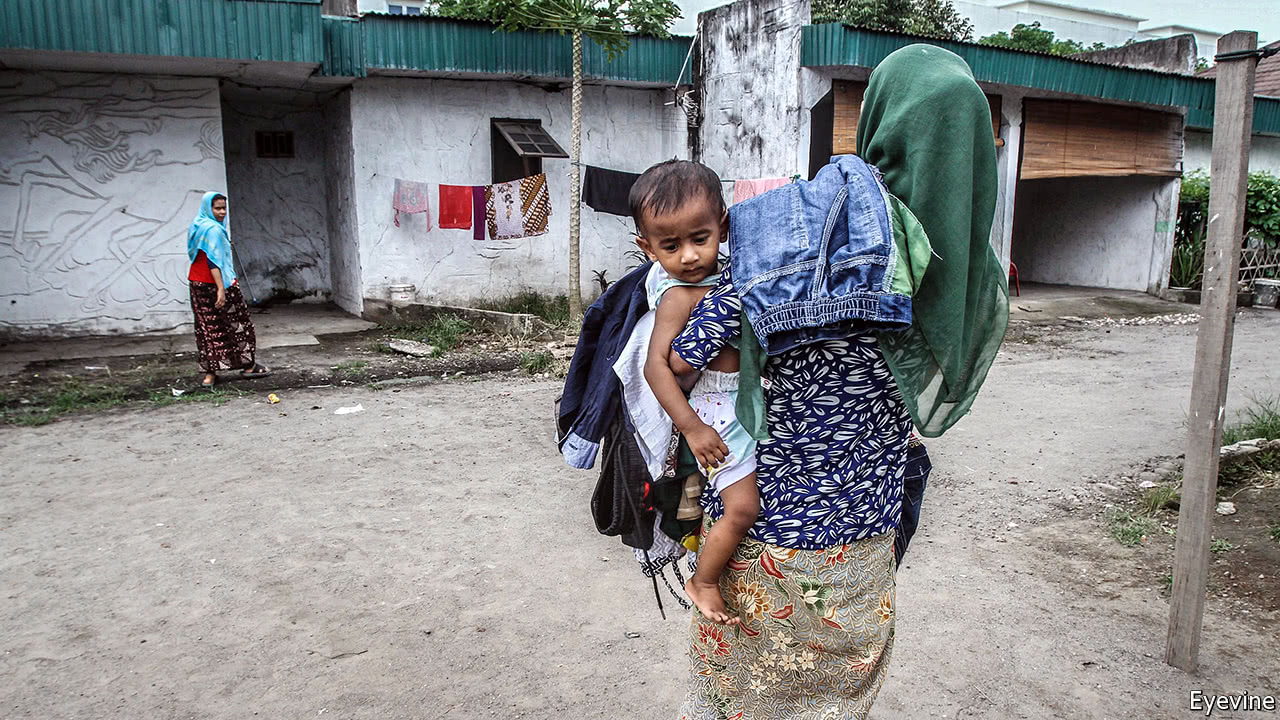 INSIDE a cramped flat beside a motorway in Puchong, a suburb of Kuala Lumpur, 13 Rohingyas jostle for space. Rows of washing, rather than pictures, hang along grimy white walls. Rubbish is stacked on two mouldy refrigerators. The only furniture in the main room is a sideboard stuffed with bedding, for when the adults—who spend their time doing odd jobs, such as collecting waste or selling scrap—come back at the end of the day to sleep on the floor. Several are gaunt, and complain of eating only one or two meals a day. With little else to play with, a toddler sucks on a metal padlock as if it were a toy.

Rohingyas are a Muslim minority who live in Rakhine state in largely Buddhist Myanmar. Over the past five months some 680,000 of them have fled to Bangladesh to escape a pogrom conducted by the Burmese army and their Buddhist neighbours. They now live in crowded and unhygienic shantytown camps just over the border. In theory, the Burmese government is willing to take them back, and has even signed an agreement to that effect with Bangladesh. But few in the camps express a desire to return without plausible guarantees of safety and fair treatment in Myanmar—a far-fetched notion given the hostility of the Burmese army and public to their return. On January 22nd Bangladesh’s government admitted that it could not start the process of repatriating them.

But the alternatives are hardly enticing. Some 200,000 Rohingyas who fled earlier bouts of violence are thought to remain in Bangladesh. Others have found their way to different countries. Precise numbers are hard to come by, but it is estimated that around 300,000 Rohingyas live in Pakistan, 250,000 in Saudi Arabia and 100,000 in Malaysia. All of the inhabitants of the flat in Puchong fled Myanmar in 2012, after the killing of a Buddhist woman sparked bloody anti-Rohingya riots. People-smugglers took them by boat to Thailand, from where they travelled overland to Malaysia.

Pakistan and Malaysia, however, have not signed the UN Convention on Refugees, which obliges receiving countries to help those fleeing persecution. Indeed, Rohingya refugees tend to disguise where they are from. Most Rohingyas in Pakistan made their way there via Bangladesh in the 1960s, when Bangladesh was still a province of Pakistan. Others pretend to be Indian Muslims, to take advantage of the warmer welcome Pakistan accords such people. The UN’s refugee agency (UNHCR) has registered around 66,000 Rohingya refugees in Malaysia, giving them a special identity card, but that does not confer the right to work or live in the country.

As Rohingyas in Malaysia cannot work legally, they have little option but to scratch a living collecting rubbish, or to take ill-paid informal work on construction sites and farms. They are vulnerable to abuse from both employers and corrupt officials. They have no access to public education. Although those who are registered with UNHCR get a discount on health care, the vast majority have no option but expensive private doctors.

Similarly, in Pakistan, Rohingya men tend to work illegally, as fishermen, mechanics or waiters. Few children attend school; child labour is rife. Outside a public hospital in a well-to-do neighbourhood in Karachi, a 33-year-old man is thankful that the government does not know where he is from. His two-year-old son has pneumonia, and is being treated inside. If he had admitted that he was Rohingya, rather than a mohajir (a Muslim refugee from India) as he had claimed, he would have had to turn to an ill-equipped private clinic.

Politicians in both Malaysia and Pakistan have been quick to condemn the recent violence in Myanmar. Najib Razak, Malaysia’s prime minister, raised the plight of the Rohingyas at a meeting with Donald Trump in September and at several summits of ASEAN, a regional club of which Myanmar is a member. Khawaja Muhammad Asif, Pakistan’s foreign minister, has described events in Myanmar as a “challenge to the conscience”.

Yet very little is being done to make Rohingyas’ lives easier. Malaysia has started a pilot scheme to get Rohingyas into work, but it has only 300 participants so far. In Pakistan the odd politician has suggested giving Rohingyas citizenship. But the people of Sindh, the province of which Karachi is capital, are not keen on the idea of competing with Rohingyas for the government’s limited resources.

As the crisis rumbles on in Myanmar, the situation for Rohingya refugees elsewhere is unlikely to improve. Making noises about helping the Rohingyas may be good politics, particularly in Malaysia, where Mr Najib will face voters later this year. But the reality is that foreign governments see them as an unwelcome burden on the state. “Malaysian officials in the past have said explicitly we cannot make the situation too comfortable here, because more will come,” says Matthew Smith of Fortify Rights, an NGO.

As a result, Rohingyas are typically kept in a state of deprivation and uncertainty. Surrounded by football trophies in a room in Arkanabad, a Rohingya neighbourhood in Karachi, Faisal Hussain, a 22-year-old Rohingya, admits that he often looks at images of his homeland in Myanmar. “They have greenery and lush farmlands,” he says, his eyes welling up. “In my heart I want to go back but I know I cannot.”