Ensuring safe return of the Rohingyas 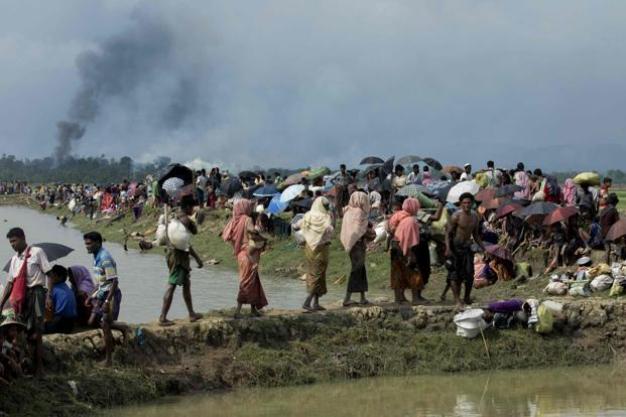 The ongoing Rohingya crisis is probably one of the worst human tragedies of the 21st century the world community, particularly Bangladesh, has seen. In the last five months, more than 650,000 Rohingyas were forced by the Myanmar government to flee home and to take shelter in Bangladesh. The Rohingya people have been subjected to killing, their women were raped and children starved to death in the Rakhaine state due to brutalities unleashed by the Myanmar army and security forces. Their houses were burnt, crops damaged and properties looted. The recent report of mass graves found in Rakhine speaks volumes about the nature of the heinous brutality committed by the Buddhist extremists and the security forces of Myanmar.

The Rohingyas have now no shelter and no land. They have been driven out of their own country because they are ethnically Rohingyas. If this is not an ethnic cleansing, what else is it?

Prime Minister Sheikh Hasina has taken this issue as a challenge with all the courage and sense of responsibility as a neighbour, knowing very well the complexity of the crisis. Unless the Rohingya refugees are taken back and rehabilitated in their homes by the Myanmar government sooner than later, it is bound to have serious impact on the socio-economic, security and political spheres of not only Bangladesh but also of the surrounding region.

To house, clothe and feed the huge number of Rohingya refugees, not to mention medical care and education of their children, will cost Bangladesh, even at a moderate estimate, at least Tk 3.50 billion every month. This is a financial burden for a low income country like Bangladesh.

The international community, at large, has appreciated the good gesture of Bangladesh government and its people and realised that this was a crisis created by the Myanmar government and its military out of sheer communal hatred and that it needed to be resolved by them.

India and China are the two closest neighbours of Myanmar. Because of economic ties as well as other strategic reasons, they have good relations with the country; so is the case with almost all the ASEAN countries. Among the super powers, Russia is believed to be in a position to exert a good deal of influence on the country.  Unfortunately, they haven’t been vocal against the genocidal attack on the Rohingyas by the Myanmar military, as was expected by the international community. The UN Security Council failed to pass a resolution condemning Myanmar for its genocidal acts against the Rohingyas because of China’s veto.

Depressing of all, Myanmar’s Nobel laureate Aung San Suu Kyi, who is supposed to be the envoy of peace and a staunch advocate of democratic rule in Myanmar, has not even recognised the issue in its correct perspective.

Fortunately, the UN General Assembly has finally been able to pass a resolution, despite China’s opposition, urging the Myanmar government to take back the refugees and allow international relief agencies to carry out relief operation among the Rohingyas in Myanmar’s beleaguered state of Rakhine without any hindrance. If this resolution is translated into action, things may take a different turn for the better. All one can hope for is a well-devised plan to resettle the Rohingyas back in their homeland. International efforts must continue to see that the repatriation process starts soon and executed well.