“Dusk To Dawn” Tells A Personal View Of The Partition 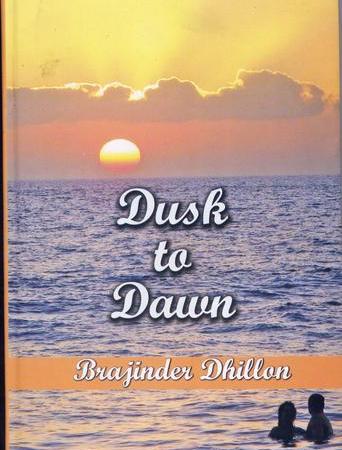 The ‘Dusk to Dawn’ of Brajinder is not simply Brajinder Kaur Dhillon’s autography but a pioneer work of literary art on the politico-cultural tradition of sub-continent of India.

The last century was widely known of exiles, émigrés and phenomenon of uproot. During India’s partition those who were living in the border areas were not immune to gross cruelty and millions of innocent people faced cold- blooded deaths. A lot of writings of distinguished writers, during nineteen fifties in India and Pakistan, have been overtaken by the cult of partition. Although, there are several books covering the gamut of India’s partition but author Dhillon‘s ‘Dusk to Dawn’ is refreshingly different because it is based upon profound personal experiences and  that makes it more authentic. The title of this autobiography is befitting because it accurately reflects her terror stricken life.  Actually, the author went through unimaginable miseries during her childhood- “those events haunted all her life”. It was not only confined to this but the imprints of those wounds also were so deep that her memories remained solidified and frozen. However, with the change of time and condition after “60 years” the softening commenced and then she conscientiously embarked upon writing this book.

In autobiography readers generally look for the truthfulness and transparency and this book, without any failure, carries these features in great length. She explicitly acknowledges that she didn’t apply imagination to decorate the pain or spice the events thus her story becomes more reliable and acceptable. This book mirrors the views, ideas, ideals, conviction and above and beyond her personality. She didn’t make any attempt to hide or cover her inner feelings. Yet she used rationality to depict her unalloyed emotions and receptivity. Obviously, she has had fusion of external reality with inner feelings. The journey of her life reflects the ecstasy, uncalculated suffering, deep anguish and scars on her soul. She didn’t try to turn suffering into glorification, but it is irrefutably evident that whatsoever she realized wrote it frankly.

The author “lived in a palatial house, enjoyed all comforts and freedom” but a host of the terrible events, during partition time, revolutionized her beliefs and to some extent life style. By giving the details of bloodshed she really tried to depict the insensibility of human values especially of those who were immersed completely into dehumanized- butchering. She raised a question- “But… was death meant for Hindus and Sikhs only in the 1947 communal riots” and further said “it was not the death of Hindu, Sikh or Muslim but of humanity” thus here she emerged as an ardent advocate of universal brotherhood.

“Bullets don’t distinguish between people of religions, race or ethnicity”, this truth has constantly echoed in mother’s   utterances. Obviously, the variety of relevant and meaningful events were responsible in shaping her thinking. Mother finally admitted- “All people are not alike. There are good Muslims in the world and there are good Hindus and Sikhs too”. This unbiased comment elevates her image a lot.

The question she raised in her childhood, “The country is freed of slavery. Both parties got separate their countries then why all this killing, mother,” is still unanswered by scholars and politicians. She keenly observed the behavior of people around her and accurately depicted their characteristics. Brajinder, time to time, sketched also the cultural ethos, religious taboos and social psychology of the people unequivocally. Those who deserved her ridicule and snub like inspector Mohammad Rafi were not spared while a few such as Zaildar Basir Ahmad and Maulvi Sahib were admired for their generosity and kindness. Her obsession of beauty of her parents and brother Bikram was not an indication of her ultra- narcissism but an innocent love for them.

She brilliantly assimilated the plethora of proverbs and sayings: “Cooking is an art that is learnt over the years by practicing” and “Even wells would get empty if you keep on spending”. Her diction is not at all stale but has the freshness. The description of her childhood activities such as – “Playing under the banyan tree, crossing the railway, relaxing at well, running in the courtyard” are quite vibrating and picturesque. It appears to me that like a matured artist she has painted those scenes on canvas. The metaphor- “wretched freedom”. carries several meanings which are often reflected in this book-   “Freedom was born out of our sweat, blood and suffering”, “Hindus, Muslims and Sikhs waited for the 14th Aug, like the Judgment Day”, “Stubborn attitude of politicians”, “ 15th Aug, freedom or destruction”  so on. Is it a soul yearning for freedom? Or is it a genuine effort to free from the traumas?

Brajinder tried to grapple with the political issues such as “who are responsible for blood bath”, “ was there  any investigation of the crimes”, and  also with the ideological concerns-“killers did they have a peaceful day” , “killers do have any conscience.” Author raised these questions but didn’t make any attempt to answer them. Everything to her appears to be personal and private.

Author portrayed the character of her mother as a religious person. The incidents around her almost suffocated her but she survived because of irresistible belief in the compassion of divinity- ‘Wahe Guru’(God). She was fearless, kind and caring with sparkling wisdom. It was not at all Brajinder’s obsession of affection on mother but a real reflection on the dazzling character of her mother.

In Lyallpur children of servants and master played together, Muslim teacher treated the children with evenness and “all the people of different religions eat, drink and exchange gifts on major festivals”.  There was no discrimination and no religious animosity but later on when the family faced distress and calamity, during partition, they were terribly shocked and this shock, it seems to me, remained Brajinder’s constant companion.

Author in last chapter added her peaceful immigrant life in Canada. A major shift from the struggle- filled- life back in India where she was branded as a “Refugee.” Her move to Canada be treated as her craving for the peace which transcends human limitation, time and space. Now it is up to readers how they assess it.

The lurking of events has constantly created the pulsating effects and exceedingly dramatic curiosity. The striking feature of this book is its simplicity and truthfulness in expression and description. She has taken a major task of mining her experiences and while doing that she has not lost her voice and identity. With masterful diction, she creates delicate feelings in favor of victims, evokes empathy for the sufferers and unfolds the socio-political reality. No doubt, her style is lucid, rapid and fresh like a mountain stream.

Her honest revelation of truth is so pronounced that she deserves a special place in literary circles.