Developments and Corollary of Nuclear Deterrence in South Asia 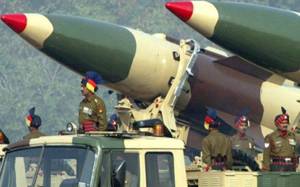 During the past decade, India has been pursuing a long-term program for conventional and strategic force modernization. This is manifested through the introduction of advanced, high technology and force multiplier conventional weapon systems and improvements in payloads, ranges, reliability, and accuracy of its delivery systems in the form of a nuclear triad. These programs continue to impact nuclear geometry of South Asia as the imbalance with Pakistan in conventional and strategic forces is consistently growing in India’s favor. This asymmetry and India’s self-image as a regional and global power is increasingly becoming prominent through its accession to the Missile Technology Control Regime (MTCR) and the possibility to join other export control cartels. Trends in India’s recent testing and technology acquisition show that the country is mostly being facilitated in its pursuit of sophisticated technology by a diverse group of supplier states including Russia, United States, France and other European countries. India was also ranked as the world’s biggest importer of conventional arms and its foreign acquisitions, and technology transfers are going in parallel with its ambitious expansion of long-range missiles, MIRVs, ICBMs and SLBMs, surveillance-armed drones and development of its increasingly sophisticated space program. These observations are reflected in some international reports surfaced lately about India’s modernization of nuclear weapons. The latest document “Indian Nuclear Forces 2017” by Bulletin of the Atomic Scientists says that India continues to modernize its nuclear arsenal development of several new nuclear weapon systems and it currently “operates seven capable nuclear systems; two aircraft, four-land based ballistic missiles, and one sea-based ballistic missile.”

Pragmatically, the induction and integration of such technologies also reflect India’s aspirations, future strategies, and policies in pursuit of regional hegemony and global power projection. Previously, the retaliatory policy or No-First Use (NFU) gave India a rationale to develop new capabilities to build defenses against adversaries such as Pakistan and China, i.e., the introduction of Ballistic Missile Defense (BMD). However, the latest developments indicate an inclination of a shift to offensive capabilities. Arguably, India’s current focus on extending the range of its conventional precision-strike systems, tri-service (land, air, sea) operation of the nuclear-tipped missiles and deviation from liquid to solid fueled missile systems for a high level of readiness is consistent with pre-emptive tendencies but paradoxical to its stated credible minimum deterrence posture. Whereas, the production of shorter range missiles defy the massive retaliation policy and point towards developing war-fighting capabilities. This ambiguous mixture of offensive and defensive capabilities erodes the concept of deterrence stability in the region as they generate strategic ambiguities has rekindled by a debate on India’s flexibility of first use in no-first use policy- among deterrence theorists, strategists-scholars and decision makers.

About the increasing stockpiles of India, another document “Trends in World Nuclear Forces 2017” by SIPRI says “India is gradually expanding the size of its nuclear weapon stockpile as well as its infrastructure for producing nuclear warheads. It plans to build six fast breeder reactors, which will signiﬁcantly increase its capacity to produce plutonium for weapons. India is also currently expanding its uranium enrichment capabilities with the construction of a new safeguarded gas centrifuge facility. India’s expanded centrifuge enrichment capacity has been motivated by plans to build new naval propulsion reactors, but the potential excess capacity could also signify its intent to move towards thermonuclear weapons by blending the current plutonium arsenal with uranium secondaries.” These developments as mentioned earlier will impact the strategic stability in South Asian that revolves around the credibility of nuclear deterrence and the stable or unstable deterrence influences the security architecture and nuclear employment doctrines. Other than missile proliferation and access to satellite-launch and anti-satellite capabilities, the increased striking capability led by armed drones to target militants across the border will speed up the arms race and heighten the risk of conflagration as these can be used against Pakistan’s short-range strategic forces and other conventional targets during a crisis. The likely competition of matching capabilities in response to amplified threats and interplay of missiles, satellites, and drones will complicate the threat-perception calculus of the South Asian region. The possibilities and options offered by a variety of such potent capabilities can allow India to adopt an aggressive strategy towards Pakistan, which may cause Pakistan to increase the alertness level in already murky South Asia. The technological shifts imply that India is reassessing its strategy which will adversely impact the Pakistan-China-India triangular nuclear dynamics generally and South Asian strategic stability particularly.