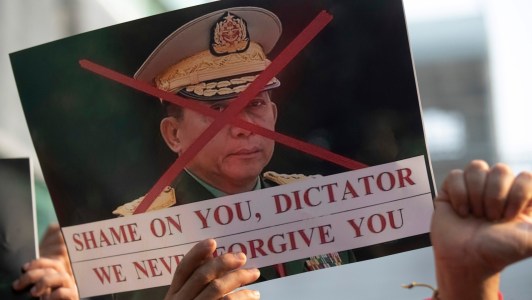 The whispers of a likely military coup were in the air in the last week of January. In fact, people in Yangon were already bracing themselves to return to military rule after a turbulent democratic rule for nearly a decade. And Myanmar’s powerful military stunned the people as well as the international community on 1st February with a military takeover for what General Min Aung Hlaing said was “in line with the law.”

After almost 18-years of uninterrupted military rule since 1992 under the then General Than Shwe, Myanmar witnessed a political ambiance change. Based on the military dictated and prepared 2008 Constitution, elections took place in 2010 that was boycotted by the most important political formation, the National League for Democracy (NLD). Daw Aung San Suu Kyi’s led NLD refused to recognise the new constitution and did not contest elections.

It followed with a victory for the army-backed Union Solidarity and Development Party (USDP). However, the international community refused to accept the military-monitored 2010 elections. The army subsequently was compelled to reduce its grip on the politico-administrative system in the next five years. Media censorship was eased while most political prisoners, including Aung San Suu Kyi, were released. The changed political scenario allowed former US President Barack Obama to visit Myanmar and the country gradually got back into the global mainstream.

The Nobel laureate Aung San Suu Kyi, too, was forced to make compromises. Her party NLD accepted the 2008 Constitution that provided for indirect military control of the government. It ensures that the country’s President could only be one who has military experience. The President, his/her spouse or children, “shall not be subject of a foreign power or citizen of a foreign country.” This clause has been specifically inserted with the explicit objective of preventing the hugely popular and almost wholly acceptable face in Myanmar, Aung Sang Suu Kyi or her sons, to stake claims for the position anytime in the future.

Further, to remain powerful even under a civilian administration, the constitution mandates the control of the two most important portfolios, defence, and interior ministries, with the army. Not content with it, 25% of the total seats in the Myanmar Parliament, i.e., 166 out of 664 seats, have been reserved for the military. That way, the army continues to hold a significant veto it can and has used against the NLD government, especially on the Rohingya issue. Aung San Suu Kyi had to face a global outrage on the UN-proclaimed ‘genocidal intent’ role of the Myanmar army that compelled more than seven lakhs Rohingyas to seek shelter in neighbouring Bangladesh.

Aung Suu Kyi-led her NLD party to a thunderous victory in 2015 after making political compromises. The Rohingya issue was accordingly tackled, following the Myanmar military’s wishes under the leadership of General Min Aung Hlaing. However, even after acquiring a greater degree of international legitimacy, General Hlaing, who visited various countries as the army chief, including India, took the unprecedented military coup decision.

Various interpretations are being made about the reasons for General Hlaing’s action. Relations between the civilian government and the army began to deteriorate in the aftermath of the November 8 elections. While the army was certain of San Suu Kyi’s NLD’s easy victory in the general elections, it was expecting a much better performance by its USDP party. The army needed a mere 167 seats and the reserved 166 seats to form a government on its own. However, in search of an outright majority with 333 seats, NLD went on to win a massive 396 seats out of the 498 it contested. And that led to a problem between the army and the civilian government.

As the Myanmar military is popularly known in the country, Tatmadaw must have realised that its entrenched interests in the political, financial, and strategic domains might get threatened once the civilian government gets more powerful. With San Suu Kyi’s popularity continuing to soar throughout the country, General Hlaing’s could have felt threatened.

Once the election results were announced, the army made its complaint of ‘irregularities and fraud,’ but in the absence of credible evidence, it was refuted by election authorities. In fact, even before the elections took place, the army already had raised its suspicions, saying, “we need to be cautious about the outcome,” which suggests it already was prepared for drastic action. While it must have calculated the political and economic implications of the action, that certainly must have involved economic sanctions by the US, EU, and major European countries, it seems that China was already on board.

The Chinese view of the military coup in Myanmar as a “cabinet reshuffle” only indicates that it is comfortable and probably happy at the development. It could pave the way for more dependence of the Myanmar military on China in the US and Europe’s likely sanctions. And that will allow it to deepen commercial, political, and strategic relations with the country and use it further to create security dilemmas for its Asian rival, India.

India though expressing its concern at the military coup in Myanmar, is expectedly remained cautious. It needs to be seen encouraging democracy in its neighbourhood and the region and supporting Aung San Suu Kyi-led NLD. However, it is aware that annoying the military will encourage it to embrace China fully. Since India shares once-troubled north-eastern borders, it could expect China to foment more trouble by exploiting the insecure and isolated Myanmar army against India.

That is a very high strategic cost India is unlikely to pay. Hence, with China’s open encouragement and tacit Indian support, General Hlaing’s military coup is likely to continue beyond the promised 12-months period. Once again, people become the victim of the yet-to-be nurtured Myanmar democracy and could well face a military rule for another long reign.