Delicate Modernization in the Last Shangri-La 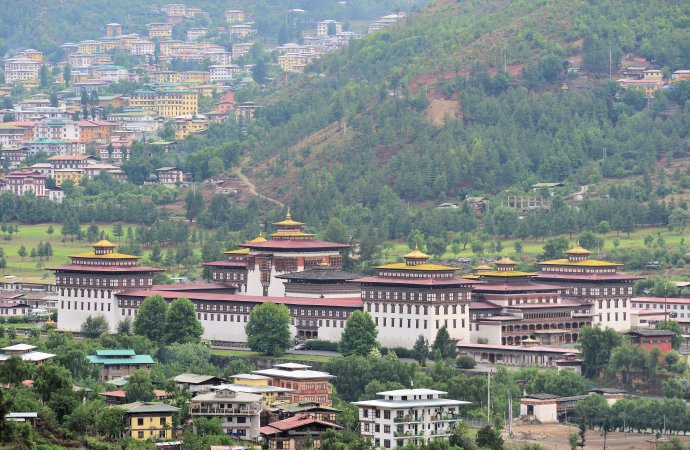 Bhutan is widely romanticized as the last Shangri-La meaning the “hidden paradise”. It would not be an exaggeration to state that this Shangri-la is a country known for its traditions, culture and identity. The importance of its traditions can be felt from the words of Harald Nestroy that the “early history of Bhutan is not based on archeology or documents but deeply connected with Buddhist religion and mythology.” Policies like “Driglam Namzha”, introduced in 1989, meant the decorum and discipline to be adorned by all Bhutanese included three components: the traditional dress of Bhutan (gho and kera) to be worn by everyone, national religion was to be Mahayana Buddhism and national language to be Dzongkha. This was initiated in order to achieve the monarch’s vision of making Bhutan a country of “one nation, one people”. The policy was set against the Lhotsmapas (the Nepali ethnic population) in Bhutan to preserve Bhutanese identity at any cost.

Some prominent developments in Bhutan include the breaking away from the isolationist policy which was initially followed to hinder any sort of outside influence on the country’s culture. There was also the replacement of centralization process, with decentralization. Finally, one of the important events in Bhutan’s political history was the introduction of democracy which also signaled the end of the monarchical rule. Keeping in mind all these developments one important question to be raised: in the midst of such developments, can Bhutan still keep itself attached to its roots of tradition? Is it a zero-sum game?

To answer the question, we need to reflect into the intricacies of several developments that have taken place in Bhutan in the recent times. Starting with the democratization of Bhutan; can speculations be drawn that democracy to some extent has been influenced by the Buddhist philosophies. To test the validity of this statement let us attend to the words of H.H Dalai Lama, “as a Buddhist monk, I do not find alien the concept and practice of democracy… Like Buddhism, modern democracy is based on the principle that all human beings are essentially equal. Thus, not only are Buddhism and Democracy compatible, they are rooted in a common understanding of the equality and potential of every individual.” The decision made by the Bhutan monarch of introducing democracy must not have been solely a political decision instead the Buddhists philosophies embedded in the country must have also played an important role in reaching out to the decision.

Another major development in Bhutan was the introduction of a unique concept of Gross National Happiness (GNH) as opposed to GDP (Gross Domestic Product). The concept of GNH is an important innovation. The concept attempts to follow the “middle-path”, which is one of the core elements of Buddhism. In other words, Bhutan unlike the rest of the world is not driven towards increasing its economy by accumulating wealth. Instead it is following the Buddhist philosophy of associating “happiness” not just with material well-being but with non-material well-being. This is to say that a balance is to be achieved between the material and the spiritual well-being of the people, as believed to be the “true happiness”.

The parameters of GNH: sustainable and equitable economic development, environmental and cultural preservation, and good governance. This policy is inspired by the traditional principles of pragmatism, conciliation and compassion. Its support for the welfare of the people is considered as the modern version of Buddhist’s doctrine of fundamental need for harmony in human relation. It has also been claimed that the policy makers have recognized that “simply imposing development models from outside which do not take religion and tradition into account will not only serve to diminish existing culture but will also meet with limited success.”

Irrespective of the religion of the officials appointed in Bhutanese government, they are made to take oath which does not have any religious content but is administered by a Buddhists monk. The monastic body plays an advisory role in the National Assembly, the Royal Advisory Council and also to the King. The monastic bodies are consulted with regard to not just religious issues but some important political issues. This underlines the role of monks in the Bhutanese society. The role of the monks had reduced with the transition from theocratic society to monarchy. But despite monarchical system being established, the office of Je Khempo (Khempos are the abbots) was kept intact.

The religious institutions are being expanded to maintain the flow of Dharma teachings. Monks are also encouraged to play a civic role. Efforts are being made to improve the understanding of the monks on the issues of development so that they can influence the Bhutanese society to promote health and environmental consciousness. The religious ceremonies like empowerments (wang-lung-thri) are conducted to keep the people intact with the values of religion. The influence of religion is extensively witnessed even in the schools and colleges where the students are made to offer Buddhist prayers. A Buddhist altar is also maintained in the educational institutions.

Even today people are not allowed to enter the monasteries in western dresses. Bhutan has already walked the path of modernization to some length, but there are still changes to be made. This is what makes Bhutan unique and is dubbed as “change in continuity” rather than a complete change. Several modernizing developments have taken place in Bhutan which include building of roads and infrastructure. It is common practice that before starting the constructions several monks and Rinpoches are invited to perform certain Buddhists rituals on the site of construction whereby the Rinpoche would then initiate the construction process by digging the soil first. The Government in Bhutan is trying to keep the essence of Buddhism alive even in the midst of the modernizing process. Thus, the Land of the Dragon tries to set an example of a fine blend of tradition and modernization.

But the challenge ahead is to wait and see that as the pace of the modernization and developmental process increases, would religion still be considered important? Will Bhutan be able to keep itself attached to its roots, because modernity in one sense also indicates the uprooting of traditional values, and how would people of other cultures who are residing in Bhutan respond to these changes? In words of Michael Aris: “are the concepts of development and culture as presently conceived so intrinsically opposed and mutually exclusive that dualism and alienation cannot be avoided? These are some of the important issues that must be answered.