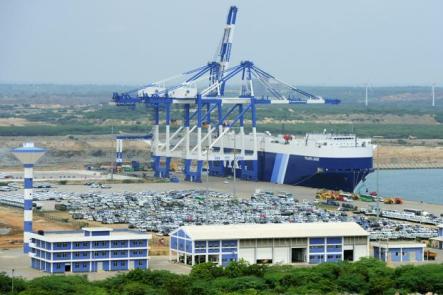 The problem with a grandiose plan of the Hambantota kind is that every time some security analyst or the media of a third nation passes and adverse remark, then the partner-governments ‘defend’ their dream project. The problem with China’s BRI, or ‘Belt and Road Initiative’, is that there is nothing to suggest that the world could not have done without it, and projects like the Hambantota Port as a part thereof would actually bring in long-term benefits, without any empirical or data to the contrary.

The fact remains that everywhere China has invested before it had actually unveiled the BRI – or, given it the present name – it was mostly as a long-term credit, with longer strings attached, to nations which found it difficult to repay loans with interest in the foreseeable future. Sri Lanka and Hambantota have not been an exception.

If anything, the incumbent government of President Maithiripala Sirisena and Prime Minister Ranil Wickremesinghe have converted the massive Hambantota loan taken by the previous Rajapaksa regime into equity for the Chinese investor. Ironically, while being a powerful minister of the Rajapaksa government, Sirisena was not known to have contested the credit-arrangement for him to oppose or stall the ‘equity-swap’ as the President. PM Ranil and his UNP were silent over the original Hambantota deal while being unsparing in their criticism of the Rajapaksa leadership over every other act of commission and/or omission of the Rajapaksas.

All of it meant that China had gone about the proposal and project in a very systematic way from day one, yes, and to the near-exclusive benefits of that nation. That China had identified ‘investment-thirsty’ nations with little political will or strategic prowess to challenge the lender-investor, later, is what makes the deal look suspicious in the eyes of third nations that are concerned – the larger Indian neighbour in this case, with its 20th century history of adversarial military relations with China.

In contrast, the India-US relations as regards what was renamed from Asia-Pacific ties to the Indo-Pacific, are all about geo-strategic relations to counter an emerging China. More importantly, the American author has not sought to hide it behind any ‘benign development investment’ of the China-Hambantota kind.

It was not the case with the US and the rest of the West in the ‘Cold War’ era, but maybe they all have come of age to take responsibility for their own acts of commissions and omissions. China, while having aped the West, the US especially, in terms of planning out its ‘economic expansionism’, has not reached the stage, where it need not have to camouflage what might well be a strategic alliance, even if in-the-making, and take ‘responsibility’, instead.

Maybe, because China is a generation, or a few decades behind the US especially in terms of taking the global centre-stage, it seems to be taking measured steps. Or, it is possible China is still reading the US global/regional history of the Seventies and the Eighties, that they are still reading about America’s unhappy exit from Shah’s Iran and Marcos’ Philippines, not to mention ‘communist’ Vietnam.

In chronological terms, China may need time to reach here, ‘the today’, but then the rest of the world might have moved forward. But China may still command an advantage, despite all that the global doomsayers may say. But that day again is not here – and may not arrive, at all. After all, other nations uncomfortable with China’s growth, expansion and ‘expansionism’ are not going to sink overnight.

What makes the current discourse interesting, or ‘inviting’ is that Prime Minister Wickremesinghe and Chinese Ambassador to Sri Lanka, Cheng Zueyuan, have both gone out of their way to ‘defend’ Hambantota, all over again, and, thus, put it on the table when no one else was overly concerned about it. After meeting with Amb Xueyuan, who called on him, Wickremesinghe ‘rejected reports of Chinese militarisation of the Hambantota Port’. Local media reports quoted Wickremesinghe as having claimed, “There is no issue of Chinese militarisation of the Hambantota Port at all. Sri Lankan Navy is the sole military force responsible for the security of the Port.”

As per media reports, PM Wickremesinghe had this to add: “Sri Lanka attaches great importance to mega-project cooperation with China, especially the projects of Hambantota Port and Industrial Park, Colombo Financial City. The Sri Lankan Government hopes to work with the Chinese side to accelerate the implementation of the ongoing projects and attract more Chinese investment in order to promote economic and social development.”

The reports also quoted Ambassador Cheng as reiterating Chinese declaration that “there is no military purpose for China to conduct friendly and pragmatic cooperation with Sri Lanka.” According to him, “China never interferes in Sri Lanka’s internal affairs and is willing to work with the Sri Lankan side to push forward the latter’s economic and social development by promoting new type of international relations featuring mutual respect, fairness and justice, win-win cooperation.”

What makes the current China-SL pronouncements even more interesting is Ambassador Chen Xueyuan’s reiteration of the same idea again, at a meeting with host Navy chief, Vice-Admiral Sirimevan Ranasinghe, at the Sri Lankan Navy HQ. The two nations “must be vigilant against baseless foreign speculations and rumours that attempted to disturb or damage the friendship between China and Sri Lanka,” he said on the occasion.

The news reported quoted Ambassador Cheng as adding, “Currently, we are going to reap the early harvest of the joint-construction of BRI, which has brought tangible benefits to both peoples.”

The Chinese envoy noted that the Colombo Port City project was proceeding smoothly and the Hambantota Port and Industrial Park were coherently inter-connected and that the joint development was going on smoothly. “Both projects are expected to be the new engines of economic development of the island-nation,” again, of course, without explaining how all it could and would be as regards the massive credit that the Rajapaksa regime had taken.

In context, Ambassador Cheng referred to “some baseless allegations that the Hambantota Port might be used for military purpose and that China and Sri Lanka should remain vigilant against such kind of rumours, and strengthen communication and coordination so as to prevent the China-Sri Lankan relations and cooperation from being disturbed or damaged.”

Ranasinghe was quoted as reiterating the government position that Hambantota Port was not being used as a military base and that the sole commercial use of the port had been clearly defined legally. “Recently, a warship of Japan Maritime Self-Defence Force smoothly berthed for supplies at the Hambantota Port, reflecting the openness and commercial nature of the port.” He also “believed that these unfounded suspicions and rumours will collapse of themselves as more and more vessels including warships from various countries berth for supplies at the Hambantota Port.”

But that is where the problem may be, as the two nations, their governments, and their political and military leaders, at relatively high levels of the pegging-order, seem too eager to respond to media reports from third nations, and at every turn – as if they had something to hide. It looks as if China and Sri Lanka in the immediate Indian and Indian Ocean neighbourhood context and relationships were skating on thin ice and wanted to believe that they would make it.