Deciphering: War on Islamic Extremism and Radicalism is Not War on Islam; Freedom of Speech & Blasphemy 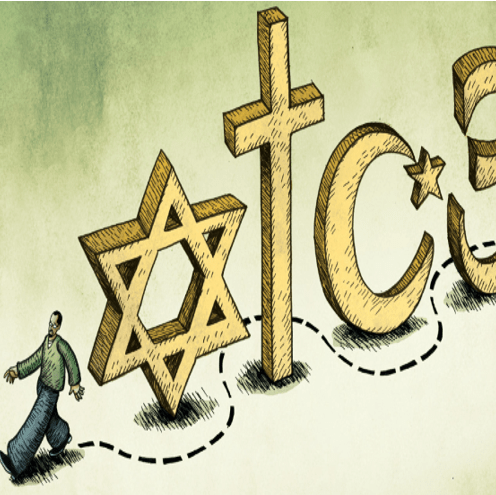 It’s the most profound and voracious argument for free speech the best defence for freedom of speech. It has never been more relevant than now, the situations in the global milieu are not that good and are highly unprecedented as the world is completely divided into two parts.  With the inhuman and brutal continuing attacks in France and then following to same A cartoon has triggered a mini clash of civilisation it has reignited the debate between free speech and blasphemy. The world stands divided each side unwilling to relent and one country is bearing the brunt and in the limelight of sole matter. The matter triggered as country opt some strict measures against terrorism after an unprecedented hate killing, here I am talking about France. This article focusing on what’s happening in FRANCE. A country code in its religious divide and striving to uphold its commitment to secularism, it is home to the biggest population of Muslims in Europe and to one of the largest populations of atheists. Laicite the concept of state secularism has been defining the concept of the French Republic but the present situation is now challenging this principle in an unacceptable and unprecedented way.

The challenge of Islamic Terrorism and Radicalism has existed in France for quite some time now but the world fully woke up to this reality 5 years back in 2015 when Paris was rocked by a serious of terror attacks, three terrorists bring havoc and that led to a massacre as they gunned down a total of 17 people, this includes the staff and editor of Charlie Hebdo. What is Charlie Hebdo?  A satirical magazine it is infamous for mocking just about every religion and ideology Popes, Rabbis, Caliphs you named it they have done it poked fun at all. It is a magazine run by atheists it has criticised and ridiculed almost every religion and religious figure but when they did the same for Islam, in the form of Prophet Mohammed all hell broke loose, event of Charlie Hebdo published a caricature of the Prophet Mohammed changed France forever.  The event led to many unfortunate events and extremists use the cartoon as an excuse they wage war on free speech and French secularism, more terror attacks followed some related to Charlie Hebdo but most with no nexus to it whatsoever. If we try to list the attacks, the list is long here it goes from 2016 Bastille Day Attack, the 2016 Normandy Church attack, the 2017 Champs-Elysees car-ramming, the 2017 Marseille Stabbing, the 2018 Paris Knife attack,  the 2019 Lyon Bombing and we are now in 2020 a deadly virus has already claimed the more lives than one could have ever imagined but the terror attacks and hate crimes in France have not stopped. In the last 10 months, a total of 07 major Islamic Terror Attacks have taken place in France, they are multidimensional in nature and terrorist tried to create a massacre by adopting the deadliest measures. They range from the ramming of cars to the stabbing of Police Men to the beheading of a teacher and a Churchgoer. The attacks by terrorists are not specified to a particular city but they had tried to create a business of terrorism in every part of France and hate killings were done. The series of attack starts from January 5 at Metz where there was attempted stabbing, on February 3 again the stabbing done, on April 4 in Romans-Sur-Isere stabbing was done, on April 27 the incident of vehicle ramming at Colombes, on September 25 the incident of stabbing in Paris, on October 16 the incident of beheading in Paris and on October 29 the incident of Beheading & Stabbing in Nice.

It takes courage to do right the thing instead of popular things.  The tag of Islamophobia is easily attached to the leaders who take stringent actions. In France, President Macron is doing what needs to be done the takedown of extremism is the need of the hour as France is continuously facing terror attacks in a way or another. The country has a region that has been called beyond the republic where French law does not hold it is imperative to impose the rule of law on people of all faith.  What would any leader do in such a scenario that is prevailing in France, I could think of this crackdown on Extremism, root out terror and Rein in the Radical, and this what exactly, French President is actually doing. He has proposed a law to regulate Islam, he wants to eliminate religion from education and the Public sector, he wants to insulate French Muslims from the radical strain of Islam from foreign instincts and to curb Islam extremism. In all and all, he wants to craft a French version of Islam that is more compatible with the country’s principle of Laicite. The French President wants to put an end to terror attacks once and for all and at the same time, he wants French citizens to have freedom for Blaspheme to make mockery and cartoons of religious instincts and faiths as done by Charlie Hebdo, the freedom to question religious principles and notions. Macron wants to ensure absolute freedom of speech and expression; it is something that all French citizens greatly uphold. His fundamental message is very clear and simple that the Constitution is above religion and all citizens must follow the rule of law. It is worthwhile to mention here that Macron is not a “Hardliner & Right-Wing Leader” if we think why the many nations is against him after the series of events and how we can forget the Paris attack, Islam never promotes hatred, the killing of innocents, and attacks on people. Macron is a centrist liberal and he faces an election in 2022 and had he wanted he can view secularism as an excuse to appease French Muslims and he could use them as a vote bank but this liberal leader has rejected the politics of appeasement and now, he is paying the price for it. As I mentioned in the beginning It takes courage to do the right things, the price that he is paying for his right steps and to reduce terrorism is that he is facing a global backlash, protests across the world including the nations where the government of that nation condemns the attacks in France but a section of society is demonstrating against Macron including India.

Some world leader is making their own profit and shedding their crocodile tears to destabilize the world peace and creating a misnomer regarding the threat to Islam as some leader of Islamic nations milking this, they have branded on Macron’s war on extremism as a war on Islam, they have tolled him calling him names and questioning the French morality and virtues. The tag given by them for Macron is Islamophobic and Prejudiced.

These are the leaders who themselves operate like tyrannical dictators in their own countries and these are the ones who make a show of praying on television leaders who claim for the rights of Muslims. Ranging from the President of Turkey Recep Tayyip Erdogan he thinks he is a leader of whole Muslims in the world, he called Macron Islamophobic and Mental, how does the Turkish President preach some lessons to Macron as how does he himself justifies his action in Turkey as on his own medieval score-settling to justify the conversion of Museums and Cathedrals into Mosques, his own regimes humanitarian crimes against the Kurds and his own silence on the killings of Muslims in China, the list is long if we want to count about his unjustified actions. The leaders of Islamic nations are just condemning the actions of France and Macron but what about the moral preaching, values, ethos, and most importantly the rights of Muslims that they are telling Macron why they can’t speak up against the genocide of Uighurs in China.

There is a difference between fighting extremism and being Islamophobic and if you make the two synonyms you made self-goal. What has the French government done exactly? Nothing more than the few steps to curb down the terrorism and extremism in the country, it has arrested a few dozen people that were involved in attacks, shut down 01 Mosque out of the 2300 odd Mosques in the country, and taken steps to Investigate Islamic organizations that may have extremism sympathy, in all and all it is a crackdown on extremism and not on Islam.

I am not denying that it cannot be criticized but it is completely wrong to say that France is marginalizing Muslims and before criticizing France I would like to ask that how many of them are condemning the series of attacks in France. Every country has the right to defend its citizen so does France and for the protestors who are protesting again, Macron needs to understand that there are far greater injustices in the Islamic world that merit more attention. The stance of violation of freedom of speech and Blasphemy, one of the instances is Charlie Hebdo, there are many in the world also like the painting of M.F. Hussain in India reconsidered as ‘Blasphemous’, there is a need to draw the lines for the true connotation of actions taken by any government and the Muslims around the world saying that there is a limit so where do we draw the line?  Who will draw these lines and how many lines will be drawn? If we are drawing lines this is where we should start nothing justifies a terror attack no religion no holy book, this is the line Macron tries to draw and the world must support him. The counter against terrorism, upholding the rule of law, and following the universal peace are some of the values and motions on which we need to work. We need to decipher between that war on terrorism and extremism is not war against Islam The law shall be supreme above everything and what Macron is doing is simply is just protecting its citizen against terrorism, extremism, and radicalism.