Dangers of maritime piracy, hidden figures and the need to secure the Indian Ocean 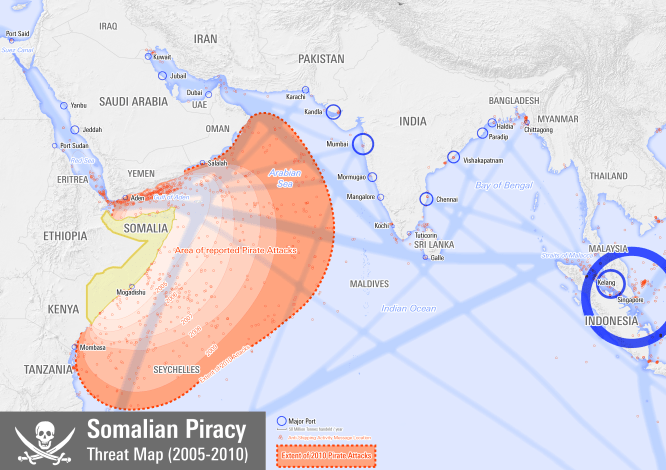 Wikipedia; Piracy off the coast of Somalia

The Indian Ocean has immense strategic and economic value, due to trade and commercial activities. However, maritime crime which includes: piracy, human, drug and weapons trafficking have posed a threat to safe navigation of the seas. A Stimson Institute study (2012) on maritime security challenges in Indian Ocean region identifies the following: it is “multiple sources of insecurities within countries that had led to crimes by way of sea such as terrorism in Pakistan, Sri Lanka and India, Inter-state conflict in Persian Gulf, state failure, insurgency and famine in Yemen, Iraq and Somalia which had led to illegal weapons smuggling into these regions, maritime terrorism to loot and plunder vessels, human and drug trafficking to gain income to finance wars” etc. Maritime piracy as a crime is not isolated to the Somalia waters but is an issue in the South China Sea, the straits of Hormuz, Malacca and Gulf of Guinea in the Indian Ocean. While efforts   of EUNAFVOR and NATO have reduced piracy attacks, the dangers are still present. It’s analyzed herein whether maritime piracy is a sufficient enough threat in the Indian Ocean Region and the need to ensure the seas for safe passage through multilateralism.

The Indian Ocean is the world’s third-largest body of water with 50% of trade traversing the region covering approximately 20% of the water on the Earth’s surface. The Indian Ocean covers at least one fifth of the world’s total ocean area with highly strategic waters including: Western Indian Ocean, India’s coastal waters and the Bay of Bengal. According to the Council of Foreign Relations (2016) “more than 50 percent of the world’s maritime oil trade is found in the Indian Ocean Region, which itself is believed to be rich with energy reserves while nearly 40 % of the world’s offshore petroleum is produced there”. The economic significance of the Indian Ocean is of immense value to all countries that are traversing it for business purposes.  Petroleum is used for energy generation and to run a wide range of industries worldwide. Maritime Crime, which includes maritime piracy, has significantly endangered safe passage of the seas; this poses a threat to trade and commercial activities.

As of today piracy has reduced due to the work of anti-piracy coalitions. Gomez and Navarro (2013) observes a lack of a single reporting center for piracy and monitoring such incidents, same incident being reported by more than one center through different routes, dates and locations, had resulted in erroneous reporting of numbers of piracy attacks. International Maritime Organization has further excluded counting “small attacks” if they were unarmed. The lack of accuracy in data has made it difficult to monitor an actual reduction in attacks but suggests a more nuanced activity of piracy in the Indian Ocean region. The study concludes that more material damage occurs in Indian Ocean due to piracy than other regions; this is because ships receive help slower than other regions. [Evidenced by the calculated numbers 66 hijackings, help sent in 22 cases, but liberated just 5 vessels]

Vespe, Greidanus, and Alvarez (2015) has studied the declining impact of piracy on maritime routes and vessel behaviors in the Indian Ocean, using [v]Long Range Identification and Tracking (LRIT); which reported anti-piracy coalitions such as EU NAFVOR and NATO have subsequently reduced the threat. It is also observed that the various organizations that collect and compile statistical data on the subject of piracy use different criteria   and definitions   in their categorizations of “suspicious   event”, “attacks”’ and “disruptions” while suspicious events may not constitute an “attack” of piracy. Re-routing of high risk areas due to piracy has reduced in the region resulting in saving money [which were previously used on longer and alternative routes] However, EU NAVFOR and NATO (as reported by Maritime Executive) were unanimous in their opinion that piracy in the Indian Ocean is suppressed but not eradicated. Although piracy could be suppressed, the “threat” remains when pirates change their modus operandi to continue their illicit activities such as transnational crimes through sea [human, arms, weapons and drug trafficking, trafficking of illegal animal species and contraband etc.]

UNODC has reasoned that 37 % of world’s livelihoods depend on oceans and in line of sustainable goal 14 on Protection of Coastal and Marine Resources countering piracy is important. It is an increasingly globalizing world and the oceans have become the world’s largest crime scene. Countries are hence engaged in combatting such crime and also in a race for resources, and securing of trade routes. There is hence proclivity for contention. Kaplan (2015) opines the “sea unlike land creates defined borders and has potential to reduce conflicts… since navies do not occupy territory the way armies do there is a better chance in 21st than 20th century to reduce military conflicts”

British naval expert Geoffrey Till asserts “if the postmodern age is dominated by globalization everything that supports globalization such as trade and energy deposits are fraught with competition and when it comes to trade routes 90% of all commercial goods travel by sea” Amidst such a backdrop of competition, Kaplan (2015) opines with reference to the disputes in South China Sea that peaceful seas may not remain so in the future. Kaplan has also pointed out that nationalism in States lead to modernization of militaries (navies, air force) to defend sovereignty and make claims for disputed maritime resources. To prevent escalation of conflicts, a balance of powers is necessary. Multilateral engagement at regional or international level is needed to overcome the “threat” (maritime crime constituting impunity at sea) which to a significant extent depends on military might or hard power approach. Multilateralism has potential to achieve a balance of powers because decision making in multilateral institutions are consensus based. In conclusion it remains that rules based governance (multilaterally sanctioned) is now a necessity.

See “Somali pirate attacks in the Indian Ocean (2005-2011): Evolution and Modus Operandi”- This study used data from four sources: International Maritime Bureau, National Geospace Intelligence Agency, International Maritime Organization and data from EU NAFVOR Atlanta operation to make observations. This study suggests that the international institutional regimes on piracy are incongruent due to lack of accurate reporting and also how the crime is identified by each organization following different understandings of what constitutes piracy.