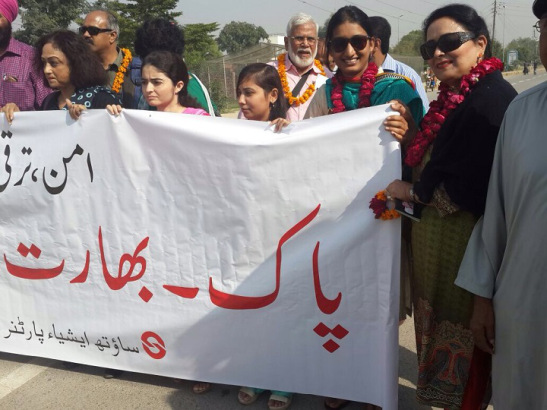 I said, “I want to go to Pakistan…” and I couldn’t finish.

“There are so many new places you can see, then why Pakistan?” “If a war starts between India and Pakistan, the first thing they will do is seal the borders and you will be left on the other side forever.” “Believe us, it’s not safe to go there. You won’t even get a US visa after this.”

Born and brought up in a Punjabi family, in an environment ‘not so friendly’ to the Muslim world, these questions did not surprise me much. But the question remained if this resentment was a result of ‘Islamophobia’ or the lens through which the world sees Pakistan as the haven for the world’s Al-Qaedas and the Talibans.

For my innate excitement to have the Lahore visa stamped on my passport and see the other side of my own Punjab, I was clear in my head, I wanted to go and find my own answers. I reached Amritsar a day before, with fingers crossed and still clueless if I will get the visa. Finally, everything fell in place and it ended with a lot of “We cannot believe you are doing this” lines.

I was one of the very few members of the 16 member delegation to go to Pakistan for the first time. Everybody asked the youngest delegate in the team, so how do you think Pakistan will be? And my excitement mounted even further. I was going as a part of the peace delegation for a conference on South Asia People’s Union. The moment we crossed the Wagah and got to the other side, a chill ran down my spine to see the site where a suicide bombing had followed the daily parade, exactly a week before. And for a second, I was amazed by the Sanskrit mantras I was chanting with a mind boggling speed, in my greed to seek blessings from all the Hindu Gods I had known till date.

A shower of rose petals by our Pakistani friends who had come to receive us at the border, was something I had definitely not expected. South Asia Partnership (SAP) Pakistan’s team gave us a warm welcome, ready to roll out the red carpet. We directly headed for lunch at somebody’s place and in my first few hours there, I was reduced to a perfect nonplus as in no way could I make out the difference between them and me. We looked similar, wore similar clothes, ate similar food and spoke the same language, that Punjabi with the same accent, except for the ‘Haye Rabba’ I burst into and the ‘Haye Allah’ they burst into, while laughing.

Within a few hours, hundreds of Pakistanis invited me to their homes and cities for lunches, dinners and stay overs. It seemed that the entire country went out of the way to welcome me. Believe me, Pakistani hospitality cannot be overstated. That day’s session was at the Human Rights Commission of Pakistan’s office. When I heard the Member Parliaments, Cabinet Ministers, Supreme Court Advocates and who’s who of Lahore mentioning how grateful they were to have the Indian delegation with them, despite the recent attack at the Wagah border, I, for some reason, was feeling proud of myself. While I was still exhilarated for living my dream of being in Pakistan alone, I was taken aback when I heard my delegation lead talking about me on the podium. “For the first time, we have with us, a very very young delegate from India. Though she was amazingly excited to be here, some part of her did tell me that she feared encountering long haired bearded men who would blast her into pieces if they know she is an Indian. My Pakistani friends, I applaud her decision to come with us and I leave this up to you now, to prove her fears wrong.” As the huge audience put their hands together for me, I just stood up to show my terror stricken face.

Minutes after that, I saw Jawad Ahmad from Coke Studio Pakistan walking towards the stage to sing his newly written song, ‘Kaun yeh faisla karega ki kiska vatan kaunsa hai’ and his very popular ‘Mitti da pehlwan’. I was awestruck listening to him live. In the end, I walked up to the stage and there wasn’t a single dignitary who did not invite me for a meal at his place. When one of the Ministers mentioned that he will see me again in a couple of hours for the Gazal night at SAP’s office, I knew for sure this was going to be one of my most memorable weeks of the year. With every next day, the week was getting more exciting – following sessions in Lahore Chamber of Commerce and Zakariya University, dinner meetings with eminent dignitaries of the city, and interviews with local newspapers.

Two days in, I was already regretting that I had only a week-long visa. In my free time, I went around to see the stunning views this place had. From Lahore fort to Minar-e-Pakistan to Badshahi mosque, I always had somebody local accompanying me and explaining the history of the place. When somebody you just met takes a day off at work to help you shop at the famous Anarkali and Liberty markets, you can be sure you are in Pakistan! I realized how an average Indian thinks a million times of all what is wrong with Pakistan. And just a week spent like that, tells you how beautiful and kind, this place and its people are.

In a concluding dinner session at the office of Pakistan People’s Party, when a senior Member Parliament stood up to offer his seat to my 24 year old self, I knew for sure, this country respects women, a respect that is not barred by age, color, caste, religion and nationality. And my delegation lead in his vote of thanks mentioned again, how he applauds my decision to be a part of this delegation, “This morning, I overheard her speaking on phone to her parents saying that she did not want to go back until she sees Islamabad. Friends, we have changed the perception of one young Indian, exactly why I call this conference a success.”

I was sure, I will be coming back with Islamabad and Karachi on my itinerary. Every single person I met extended help to arrange a multiple city visa for me. The longer you stay the more you fall in love with the people and the place. For just one moment, I wished Pakistanis were less hospitable.

Things in Pakistan won’t change overnight. But a mere visit does shatter many misconceptions. For all those who call Pakistan a failed state, need to go to Lahore. That’s the city I can confidently vouch for and am sure other places are no less. Terror attacks intensifying in some parts of Pakistan cannot be ignored but does it mean that small population is a representative of the 200 million Pakistanis who are doing amazing things within and outside the country? Certainly not! It’s time we stop blaming polity of both the nations. It’s time to switch off the news channels and get out of our houses for once. Get to this transfixing destination which is so easy on the pocket and will kindle your love for the country.

Our soils are parted, let’s not part our souls! Be the change! Cross and let cross…the borders..