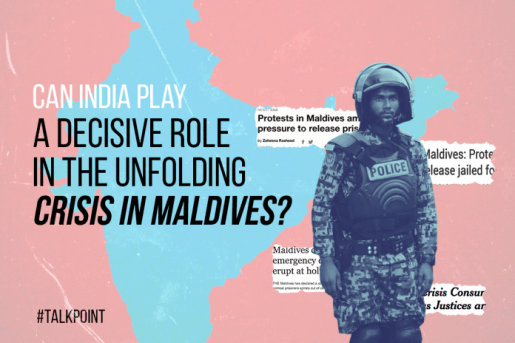 The outcome of a power struggle in the Maldives that has sparked declaration of an emergency, military control of parliament, and arrests of senior figures, is likely to shape the geopolitical designs of China, India, the United States and Saudi Arabia at a strategic interface of the Indian Ocean and the Arabian Sea.

The struggle between authoritarian president Abdulla Yameen and exiled former president and onetime political prisoner Mohamed Nasheed, a staunch critic of Chinese and Saudi interests, has a direct bearing on the future of the two countries’ significant investment that has already reshaped the archipelago’s social and political life.

The struggle also involves Maumoon Abdul Gayoom, the politician who served longest as the country’s leader, Mr. Gayoom’s son-in-law, Mohamed Nadheem, and senior figures in the judiciary, including Chief Justice Abdulla Saeed. All were detained last week on charges of corruption and attempting to overthrow the government.

Mr. Yameen, in what United Nations High Commissioner for Human Rights Zeid Ra’ad al-Hussein dubbed an “all-out assault on democracy,” declared the state of emergency after the Supreme Court ordered the release from prison of opposition politicians and their retrial. The state emergency, gives the government sweeping powers to make arrests, search and seize property, and restrict freedom of assembly.

The court ruling appeared to enhance Mr. Nasheed’s chances of challenging Mr. Yameen in elections scheduled for later this year by giving the opposition a majority in the country’s legislative assembly.

Politics in the Maldives, a strategically located 820-kilometre-long chain of atolls with a population of 420,000 that is best known as a tourism hotspot threatened with demise by climate change, are convoluted. Mr. Gayoom is Mr. Yameen’s half-brother and opposed to the president together with Mr. Nasheed, who unseated Mr. Gayoom in the country’s first democratic elections in 2008.

Mr. Yameen, who came to power in 2013 in a disputed election that opponents say was rigged and has since been accused of eroding democracy, allowing Islamic militancy to flourish, cracking down on dissent and jailing opposition leaders, has been amenable to Chinese and Saudi interests that analysts believe could lead to the establishment of military bases in the archipelago.

China sees the islands as a node in its “string of pearls” – a row of ports on key trade and oil routes linking the Middle Kingdom to the Middle East – while for Saudi Arabia, the atolls also have the advantage of lying a straight three-hour shot from the coast of regional rival and arch-foe, Iran.

The possible building of Chinese and/or Saudi military bases in the Maldives would complement the independent development of both nations’ military outposts in Djibouti, an East African nation on a key energy export route at the mouth of the Red Sea.

They “want to have a base in the Maldives that would safeguard trade routes – their oil routes – to their new markets. To have strategic installations, infrastructure,” Mr. Nasheed charged last year.

The United States. through its Sri Lanka-based ambassador, and India have primarily sought to counter China’s growing influence by pressuring on Mr. Yameen to adhere to democratic principles. Mr. Nasheed was in the Sri Lankan capital of Colombo when the state of emergency was declared and like incarcerated Judge Saeed, who was appointed by Mr. Nasheed, has maintained contact with Indian authorities.

Mr. Yameen’s election in 2013 derailed negotiations with the United States for a Status of Forces Agreement (SOFA), that would have tightened military cooperation with the Maldives and given the US military greater access to the archipelago. A return to power by Mr. Nasheed, who in 2009 became the Maldives’ first democratically elected president, would have likely revived the negotiations.

Mr. Yameen, in a further turn towards China, in 2016 withdrew the Maldives from the Commonwealth of Nations after the association of former British colonies threatened to suspend it for chipping away at democratic institutions.

Saudi Arabia sees its soft power in the Maldives as a way of convincing China it is the kingdom rather than Iran that is the key link in China’s Belt and Road initiative that aims to link Eurasia to the People’s Republic through Chinese-funded infrastructure.

Saudi Arabia, to lay the ground for the investment, has in recent years funded religious institutions in the Maldives and offered scholarships for students wanting to pursue religious studies at the kingdom’s ultra-conservative universities in the holy cities of Mecca and Medina.

The funding has pushed the Maldives towards greater intolerance and public piety. Public partying, mixed dancing and Western beach garb have become acceptable only within expensive tourist resorts.

The Maldives is, moreover, believed to have contributed more Islamic State fighters in Syria and Iraq on a per-capita basis than any other country that was not a party to the conflicts.

The Saudis, despite being bitterly opposed to the Islamic State, have had, according to Mr. Nasheed, “a good run of propagating their world view to the people of the Maldives and they’ve done that for the last three decades. They’ve now, I think, come to the view that they have enough sympathy to get a foothold.”

Messrs. Nasheed and Gayoom have urged India to intervene to force Mr. Yameen to release the judges and other political prisoners. Mr. Nasheed went a step further by calling on India to deploy a “physical presence” in the archipelago. India, which rarely intervenes in the affairs of foreign countries, helped put down an attempted coup in the Maldives in the 1980s.

In a statement, India advised Mr. Yameen to abide by the rule of law. “In the spirit of democracy and rule of law, it is imperative for all organs of the Government of Maldives to respect and abide by the order of the court,” the statement said.

The US State Department charged that “President Yameen has systematically alienated his coalition, jailed or exiled every major opposition political figure, deprived elected members of parliament of their right to represent their voters in the legislature, revised laws to erode human rights… and weakened the institutions of government.”

Mr. Yameen, backed by China and Saudi Arabia, and in the absence of more strident Indian and/or US action, is likely to maintain the upper hand. He appears to enjoy the support of his military and police despite the sacking of the police commission immediately after the declaration of the state of emergency. To drive the point home, state television showed pictures of military and police officers pledging to sacrifice their lives “in the defense of the lawful government.”