Corruption in Bangladesh: Perceptions vs. reality

Corruption in Bangladesh: Perceptions vs. reality 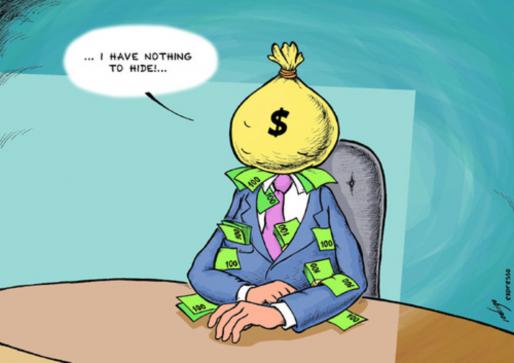 Corruption became so integral to Bangladesh that consecutively for five years (2001-2005) it remained the most corrupt country in the world. However, we hear things have changed for the better. On the one hand, the country has become self-sufficient in food; on the other, it’s no longer the most corrupt nation on earth, officially! Meanwhile, Bangladesh’s human development index has also risen – it’s higher than India’s and some other countries’ in the Third World. The country has already become a lower middle-income country. So far so good! However, these indexes don’t always tell us the whole truth about the states of governance, corruption, poverty, inequality, and most importantly, frequent violations of human rights across the country.

Officially, as per Transparency International’s (TI’s) Corruption Perceptions Index (CPI), Bangladesh in 2016 was the 15th most corrupt country in the world, 2nd most corrupt in South Asia. In view of the unprecedented level of corruption in Bangladesh, and the alarming rise in the number of organized violations of human rights of ordinary people, politicians, intellectuals, journalists, women, and members of minority communities, it’s time to assert that: a) there’s a wide gap between perceptions and ground reality of corruption in the country; b) the bulk of the population – due to popular belief and pragmatic reasons – believe in the efficacy of corruption; and c) corruption and human rights violations are positively correlated to each other.

Now, to support my main hypothesis that Bangladesh is still among the top corrupt countries in the world, I cite an interesting story (“Snapshot of reality”) that came out in this daily on Friday, January 27, 2017. This helps us understand two things: first,  the average Bangladeshi no longer believes in the age-old maxim, “Honesty is the best policy”; and second, corruption and violence go hand in hand.

The story is about physical attacks on an honest Assistant Commissioner of the Customs Department by some rowdy dishonest people, in his office at Chittagong. Recently, some corrupt clearing and forwarding (C&F) agents (brokers) attacked the Officer, confined him to his office for hours, pelted stones at him, ransacked his office, and removed his nameplate off the door . They attacked the Officer because of his honesty; he refused to accept any bribe or “speed money” in exchange of giving them any undue benefits.

Does one incident establish rampant corruption in Bangladesh? “No” could be the answer had the Revenue Department and law-enforcers taken stern actions against the corrupt, rowdy brokers instead of punishing the victim by transferring him to a training academy! Recently, a senior Cabinet Minister justified government officials’ taking “speed money” from people, in exchange of giving them service. As if public servants aren’t paid to do their job with taxpayers’ money!

As the story goes, the Customs Officer, who never indulged in corruption, told the writer a story about his own people’s acceptance of corruption as something normative: “When I visit my village, people want me to donate money for various purposes like construction or renovation of mosques …. As I don’t have any other source of income, I cannot contribute much and sometimes become a laughingstock. People, including my relatives, get very annoyed. They say, ‘Come on! You are in the administration. You can make a lot of money.’ Learning that I despise bribes, some even say, ‘What are you? A fool?’” According to one C&F union leader, the officer who never takes bribe, “had to face this situation because of the reality of our society is different”.

Lack of transparent and accountable governance, and the prevalence of impunity for well-connected people shroud the real extent of corruption in Bangladesh. Corruption is not all about taking or giving bribe, it’s about what individuals, organizations, and governments often ignore or condone by turning a blind eye to the corrupt practices by their cronies, friends, and political supporters. Politically well-connected criminals just get mild slaps on the wrist for mega scandals. They get away with plundering billions of taka through the share market, government’s development projects (bridges, flyovers, roads and railway tracks), nationalized and private banks, and even by grabbing  thousands of acres of land to build mega shopping malls and residential areas. They are too many, and too well-connected and powerful to name!

Recently, I met a cross section of people in Bangladesh, newspaper editors, journalists, a prestigious Western news agency’s bureau chief in Bangladesh, retired government servants, including diplomats, NBR members, generals, police officers, judges, university teachers, prominent human rights activists, bankers, businessmen and industrialists, and last but not least, private car drivers, rickshaw pullers, and CNG drivers. They all seem to agree on one point: “corruption and violations of human rights in the country have gone up”. I think underestimating the extent of corruption, human rights violation, and poverty in Bangladesh – where drivers, rickshaw pullers,  garment factory workers, and domestic servants, among others, live well below the poverty line ( at $2 per capita per day) – also amounts to resorting to corruption.

Three of my interviewees – a retired Additional IG of Police, a retired district judge, and a Western news agency’s bureau chief – gave a horrific picture of the institutionalization of corruption – which they insisted prevailed with the full knowledge of ministers, lawmakers, high civil and military officers, intellectuals, and the ordinary people.

The moment one draws a parallel between corruption and organized violations of human rights by law-enforcers, criminals, and political goons, one has no reason to believe corruption has really gone down in the country. All sections of the society – especially the rich and powerful – simultaneously resort to corruption and play the hideous hide-and-seek game to deny their crime. Lastly, people’s adherence to religious rituals only, with almost no respect for the morals or ethical teachings of the religion, and their drawing a line between sin and crime are problematic. In sum, corruption of public morals is at the roots of all corruption in Bangladesh.

The writer teaches security studies at Austin Peay State University. He is the author of several books, including his latest, Global Jihad and America: The Hundred-Year War Beyond Iraq and Afghanistan (Sage, 2014). Email: tajhashmi@gmail.com