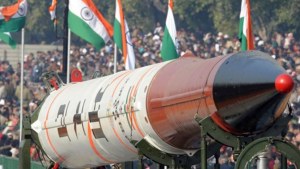 “Nasr has put cold water on Cold Start” is the statement that buzzed the headlines recently after Pakistan successfully undertaken a series of training launches and test/trials of its short-range surface to surface ballistic missile. This development grabbed the attention of critics on Nasr’s improved technical parameters to counterweight Indian Cold Start Doctrine and rekindled the debate on India’s limited or proactive war strategy. India unveiled its offensive doctrine named “Cold Start” back in 2004, after the failure of Sundarji doctrine in operation Parakram, which took place in 2001-2002 in the wake of terrorist attack on Indian Parliament. The Sundarji doctrine failed due to dawdling Indian mobilization that permitted Pakistan to mount its reaction and beat Indian strategic designs. The new Cold Start doctrine was resultantly aimed to mobilize quickly and to exterminate Pakistani armed forces before they could accumulate a response. Although the entire doctrine is classified, the declassified concept is to reconstitute the existing three Indian army’s strike corps into eight integrated battle groups that could be deployed quickly to strike the narrow pieces of Pakistan’s territory through limited incursion. It is believed that the doctrine was designed on the assumption that Pakistan would not resort to the use of nuclear weapons in response to limited incursion that does not cross its nuclear threshold. Resultantly, the policy circle in Pakistan argues that CSD would provide India the space for conventional or limited conflict in a nuclearised region. Thus for an appropriate reactionary response to CSD that excludes forceful nuclear retaliation, Pakistan developed the low-yield, short range, battlefield ‘Nasr nuclear missiles.’

Thus, India’s military doctrinal transformation and rapidly maturing ballistic missile capabilities indulged Pakistan in miniaturization of warheads in the mid-2000s. The chronology of technological developments speaks volume that Pakistan has been exhibiting a reaction by building up its nuclear capabilities in response to India’s rising nuclear and conventional ambitions, to ensure the credibility of its nuclear deterrence. Nasr, the low-yield nuclear weapon, was revealed in 2011, to add deterrence value to Pakistan’s strategic weapons at short ranges, to deter India from pursuing Cold Start Doctrine and to provide a qualitative response to conventional threats and asymmetry perceived by India. The development of Nasr has also been stated as a significant contribution to ‘full spectrum deterrence’ that Pakistan reiterated to maintain to deter all form of aggression.

The improved technical parameters for the Nasr system should not come as a surprise in the backdrop of 2001 official statement that mentioned ‘first flight test’ with an indication of more tests to validate designed parameters. The significant addition of new technical parameter is extended the range from 60 km to 70 km. The improvement in range may not seem significant, but it will certainly allow Pakistan to hit enemy’s target from a far afield into its land that will provide survivability to Nasr batteries by making the penetration more challenging for the adversary.
The country’s official statement by ISPR also mentions ‘flight maneuverability’ which inflicts that maneuverability has been improved from the last tests took place in 2013 and 2014 that said in-flight maneuver capability specially designed to defeat anti tactical missile defense systems. The recent Nasr test was the first since 2014 when Pakistan successfully launched four missiles from a state of the art multi-tube launcher with Slavo mode. The missile was also tested first time lately since India’s COAS General Bipin Rawat publically confirms the existence of Cold Start Doctrine in an interview held last year. The missile also possesses ‘shoot and scoot attributes to target with accuracy and immediately relocate to another position to avoid counter-fire from enemy positions. The official statement also notes that this weapon system will augment credible deterrence against prevailing threat spectrum more effectively, including missile defenses. Pakistan’s recently tested medium range ballistic missile, Ababeel, capable of launching multiple warheads using multiple independent re-entry vehicles (MIRV) also aimed to defeat hostile radars with an aim at ensuring survivability of Pakistan’s ballistic missiles in the growing regional anti-ballistic missile defense environment.

Interestingly, India also conducted tests of its short range missiles recently. In the start of this month, India tested Quick Reaction Surface to Air (QRSAM) short range missile with strike range of 20-30 km. The first test launch of the same missile was conducted in this June while Prithvi-II with range 350 km was also test-fired in the same month. Response from Pakistan seems evident and to ensure that Islamabad has the capabilities to counter the intimidating advancement. It is believed that the ballistic missile system developments of Islamabad is focused on responding Delhi’s advancements which serves the purpose to ensure counter strike capability, maintains credible deterrence, readiness, and robustness of Pakistan which reduces the threat of India’s conventional limited war. Resultantly, while India is developing its short range ballistic missiles, intercontinental ballistic missiles and anti-missile program, Pakistan is focusing on its short-range and medium-range ballistic missiles with improved payloads, range, and reliability to consolidate Pakistan’s strategic deterrence in evolving regional scenario.

Maimuna Ashraf is a Research Associate at an Islamabad-based think tank, Strategic Vision Institute (SVI). She works on issues related to nuclear non-proliferation and South Asian nuclear equation. She writes for South Asian Voices, international blogs, and national dailies. She can be reached at Maimuna.svi@gmail.com.