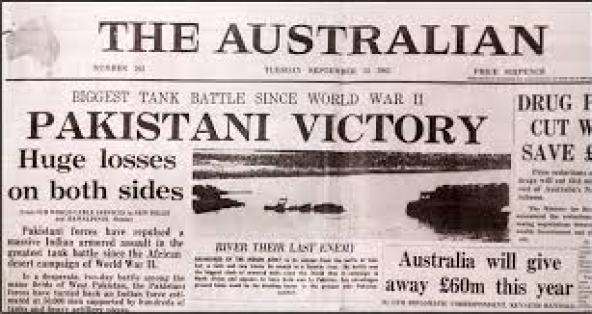 China is one of the most reliable partners of Pakistan throughout the establishment of their diplomatic relations since 1951. It has been a trustworthy companion in providing Pakistan with the military assistance, economic advancement, financially viable means (the recent CPEC is a clear example) and supporting Pakistan in volatile and unpredictable regional security circumstance. One of the examples of this unparallel friendship is China’s incomparable support to Pakistan in the Indo-Pakistan war of 1965. The skirmishes which were being carried out from April 1965 up till September culminated into a full-fledged war when on 6 September 1965 Indian forces attacked Pakistan in a surprise move without any inducement.

Causing thousands of casualties and human loss the war observed the most significant usage of armored vehicles and the battle tanks since World War II. The neighboring friends and countries that supported Pakistan included Iran, Turkey, and Saudi Arabia more specifically China which viewed the short-term war not much favorable for Pakistan. China had some reservations vis-a-vis the Soviet-sponsored declaration (later signed as Tashkent declaration). Eventually, After seven days the United Nations intervened and declared a ceasefire which brought an end to the hostilities between the two. However, China mainly played an essential role in supporting Pakistan in this crucial time while naming Indian act as “naked aggression.” China at that time exerted pressure to force the belligerent state, i.e., India, for a ceasefire. With this China served frequent warnings to India “that it must bear responsibility for all the consequences of its criminal and extended aggression.” Considering India’s aggressive action, China issued a sharp ultimatum to India to avoid the usage of the Sino-Indian border as a vantage point for military installation within three days or face the grave consequences arising thereon. China also strengthened its defense and heightened its alertness along its border at Doklam and Sikkim. For sure such warnings were definitely to serve Pakistan’s interests and to divert India’s attention from crossing the Line of Control (LoC).

These ultimatums stopped India from escalating further was followed by the western opposition for Pakistan. Instead of broadening prerequisite help to Pakistan as a strategic ally of the Cold War defence pacts, i.e., SEATO and CENTO, the United States somewhat obligated arms embargo on Pakistan and gave a free hand to India. Despite sanctions, China supported Pakistan as much as it could. The support was friendly yet cautious. The primary reason for China in avoiding to intervene in the 1965 Indo-Pak war directly was the Indo-Soviet Treaty of Friendship and the US-Soviet-Indian complicity in opposition to China.

Later China facilitated Pakistan financially to compensate for Pakistan’s war losses by offering US$ 60 million in 1965 and military equipment including tanks and aircraft. Eventually, China’s support to Pakistan in 1965 Indo-Pak war further consolidated Pakistan China relations. It also supported Pakistan in 1971 war with India. China is now one of the biggest investors in Pakistan as the great China-Pakistan Economic Corridor (CPEC) is one such example. With the passage of time, China-Pakistan relations become sweeter than honey and higher than the Himalayas. China has always perceived Pakistan as an important ally which could provide it the much required geostrategic linkages and route access to the Middle East and the Persian Gulf. It is also a source for bridging the relations in the Islamic world. China at some times acknowledged Pakistan’s friendship saying “China can give up gold but not its friendship with Pakistan”- President Hu Jintao.