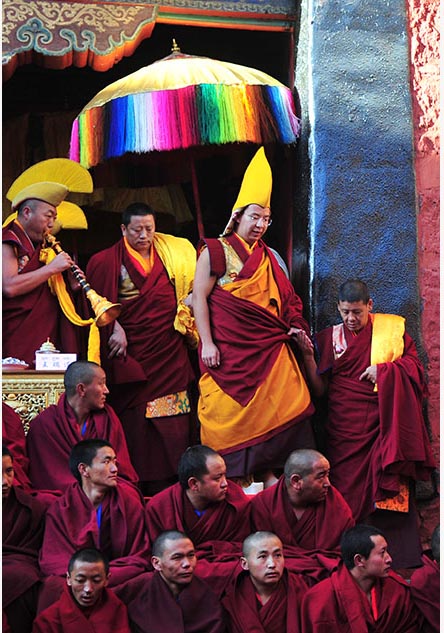 It is reported that Baingen Erdini Qoigyijabu who was recognized (appointed) by Chinese government as the 11t h Panchen Lama, started the Kalachakra ritual, which is a holy ritual and important rite for Buddhists for activating dormant enlightenment.

The fact is that Baingen Erdini Qoigyijabu, a 25 year old man now, took over the position of 11th Panchen Lama with the approval and support of the government of China and not with the approval of the Tibetans or the Buddhists. In other words, this gentleman was foisted on the Tibetans by China in its efforts to strengthen its hold over Tibet and give an impression that Chinese government is following the Tibetan traditions.

After taking over Tibet by military intervention and making the Dalai Lama and his followers flee the country and by holding on to the Tibetan territory for over 50 years now by wielding its military power and adopting ruthless approach to enforce silence in Tibet, China has no ethical or moral right to appoint Panchen Lama.

The fact is that China imposed Baingen Erdini Qoigyijabu on Tibet as the 11th Panchen Lama without observing the Tibetan traditional means including a search by the tenth Panchen Lama’s senior staff based on dreams and omens and formal recognition of the result by the Dalai Lama.  Proper procedures were not observed and the Dalai Lama’s consent was not received.

In 2014, Chinese government hosted over 600 international delegates for the 27th general conference  of the world fellowship of Buddhists in northwestern China.  China spent huge resources in organizing this program and made Baingen Erdini Qoigyijabu it’s “nominee 11th Panchen Lama to address the conference.  As expected, Baingen Erdini Qoigyijabu told the gathering that support of the Chinese government for the conference was a proof that freedom for practicing Buddhism exist in China. He went on to say without any sense of pride about Tibetan soil that Buddhism has already integrated into the Chinese culture with the recognition of the Chinese government.

By now, asking Baingen Erdini Qoigyijabu to deliver the tantric Kalachakra instructions, for the first time in 50 years, Chinese government is making yet another attempt to fool the Tibetans that Chinese government approves and support the traditional practices of Tibet. Of course, with its money and muscle power, Chinese government has been able to organize large number of Buddhists to participate in the event.

Historically, world has seen several aggressors who forcibly take over another country and adopt such practices to win over the local population. as Chinese has been doing now in Tibet.

Even in India, which was under British rule for over 400 years, there were many Indians who accepted the British leadership without reservation and willingly submitted themselves to the orders of the British government. It required a great man Mahatma Gandhi to descend on the scene and create pride in the mind of Indians, which ultimately resulted in the Britishers providing freedom to India and leaving the country.

Like the China doing now in Tibet, Britishers also had identified and pitchforked number of Indians who were more loyal to British government than to the Indian soil and they were rewarded with plump posts by British government.

The world, historically, has seen several such people, who look for awards and positions and receive them with glee, unmindful of the damage done to the cause of the nation to which they belong.

Obviously, many Tibetans living in Tibet now would be silently and helplessly fuming about the Chinese government’s efforts to legitimize a person of its choice as the 11th Panchen Lama and in the process attempting to legitimize its rule in Tibet. Tibetans living around the world feel dismayed at the Chinese government’s efforts to perpetuate its rule in Tibet by adopting such gimmicks.

Tibetans living in Tibet and across the world should keep in view that India attained freedom after four hundred years of British rule.  British government’s efforts to integrate India with Britain never succeeded, as it was so unnatural and illegitimate.

Tibetans have to keep their spirit high and hope alive and continue voicing their demand that Tibet should be restored to its original glory and have its rightful independence.