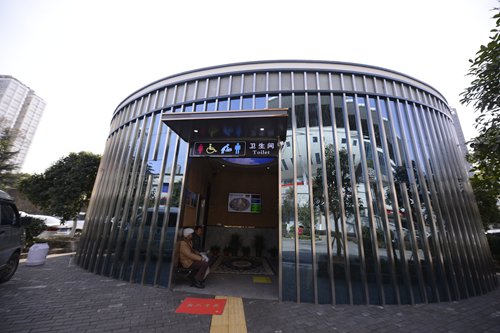 A view of a Wi-Fi-enabled smart toilet facility on the streets of Changsha, capital of Central China’s Hunan Province Photo: IC

China and India have both achieved progress in their campaigns to build more hygienic toilets and enhance people’s hygiene awareness in recent years. Restricted by its religion and culture, India’s “Clean India” mission, however, is unlikely to hit target by the October 2019 deadline, when it hoped to put an end to open defecation. In comparison, China’s “toilet revolution” has developed rapidly in the tourism industry, making marked progress in rural areas in particular. Experts said technology innovation is the key to driving change and mitigating the risks of water pollution.

The taboo topic of promoting hygienic toilets and sanitation has been placed under the spotlight in the world’s two most populous countries in recent years.

Qian Jun, founder of the Yu Ting Public Welfare Foundation, told the Global Times on Friday that compared to the rapid progress of China’s 2015 “toilet revolution” campaign, the equivalent campaign in India still has lots of catching up to do.

Although Chinese people have always had household toilets, national sanitation is still in need of improvement. Meanwhile, in India, many people do not have household toilets because they are seen as dirty in certain religions, as explored in 2017’s Bollywood sensation Toilet: A Love Story.

As of July 30, 67.2 percent of Indian villages were declared open defecation free (ODF), data from India’s Ministry of Drinking Water and Sanitation showed.

This is a milestone result of the $20 billion “Clean India” campaign established by Indian Prime Minister Narendra Modi in 2014, which aims to make India ODF, the country’s traditional practice, by October 2, 2019.

According to an indiaspend.com report on Friday, ODF villages are defined as those where feces are not openly visible and where every household and public toilet has safe technology that properly disposes of waste and thus prevents environment contamination.

A government report released in October, however, noted that the toilet usage rate in three surveyed ODF Indian villages only ranged between 1 and 63 percent, proving the need for harder campaigning.

In rural areas of India’s eastern state of Jharkhand, many people have found a novel way of using toilets built with government funds.

One farmer’s family was overwhelmed by the thought of building a toilet. “The funding of 12,500 rupees [$181.5] was too little to build a proper toilet. I tried to construct it, but it was still incomplete. So, I now use the facility to store grains,” a 45-year-old Jharkhand farmer, who asked to remain anonymous, told the Global Times, noting he still goes to the fields to relieve himself.

In urban India, meanwhile, people are more eager to participate in the “Clean India” mission.

Some residents even donate to the government’s sanitation funds for safe toilets. One vendor who asked to remain anonymous said that he invested 15,000 rupees in building a “good lavatory” in his home after years of inconvenience using open areas.

Jack Sim, founder of the Singapore-based World Toilet Organization, told the Global Times on Friday that “although the target of reaching a complete ODF India may not be fully achieved by [October 2, 2019], the momentum of the toilet construction program is really impressive and substantial. And the momentum is also irreversible now.”

As far as Sim is concerned, a demand-driven rather than a supply-driven approach is more effective in getting people to use toilets and therefore in attaining sustainability.

From quantity to quality

Solid support for the “toilet revolution” campaign has come from Chinese President Xi Jinping, who has said that the construction of clean toilets is an important part of pushing urban and rural civilization, and more efforts should be made in both cities and rural areas to upgrade public toilets to improve people’s quality of life.

The GDPs of many Chinese provinces are supported by their local tourism, a pillar industry.

Reaping the benefits of a clean toilet corporate culture, Xiamen-headquartered tea supplier and producer Tianfu Holding Co’s 4A-level tourist site has witnessed a 20 percent year-on-year increase in terms of tourist numbers, according to the firm’s vice-general manager He Ying.

“Visitors or passersby like to use our toilet thanks to word of mouth,” He told the Global Times on Saturday.

In the past, foreign visitors laughed at China’s appalling restroom environment, saying a toilet could be found by one’s nose rather than one’s eyes, said Qian. “However, the situation has improved a lot over recent years.”

By the end of October 2017, about 68,000 toilets had been newly installed or improved across the nation thanks to efforts led by China’s Ministry of Culture and Tourism. That number is 19.3 percent higher than the three-year revolution target and covers more than 3,000 4A-level tourist sites in over 370 major tourist cities and 20,000 tourist villages, according to a report by news site thepaper.cn.

The ministry further plans to install and upgrade another 64,000 toilets at tourist destinations between 2018 and 2020, the Xinhua News Agency reported in November 2017.

“People are attaching more importance to toilet,” said Li Zifu, a professor at the Beijing-based University of Science and Technology.

“Further understanding of the relationship between infrastructure building, user habits and daily maintenance is the key to ensuring a clean, safe toilet culture with complete functions,” Li told the Global Times on Friday.

“I’ve visited many toilets in both big and small cities’ tourism spots in China and I was surprised at the speed of change. In three years, the improvements are significant,” Sim said.

However, Sim said that for rural schools and rural toilets, there is still a lot of room for improvement.

“Their toilets are neglected and their dry toilets are full of flies and very unhygienic for the children. They also have no privacy without doors and partitions,” Sim recalled, noting money is not the problem since these villagers can afford modernized home appliances.

“What they need is strong public education and village-level leadership to improve their toilets.”

Improvements to village toilets are crucial as such development is linked to the country’s wider rural revitalization strategy, Li says.

However, he warns that the upgrading of rural toilets should not follow the same old path as urban toilet upgrading did, as sanitation efforts in cities have somehow resulted in water pollution.

Mukesh Sharma contributed to this story