China challenges UN high commissioner: Come to Xinjiang, but not for ‘investigation based on guilty before proven’ 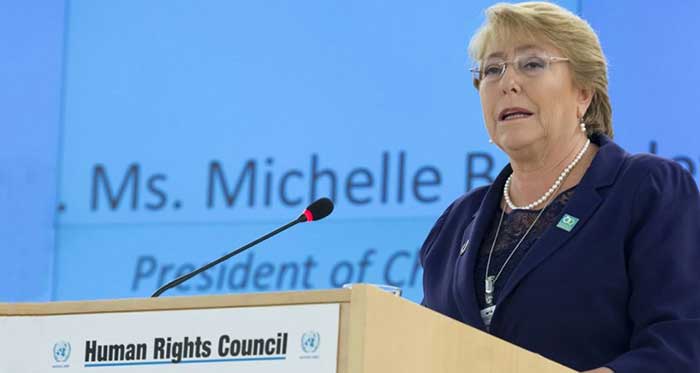 China has said that the door to Xinjiang “is always open” for UN High Commissioner Michelle Bachelet, after she claimed Muslim Uighurs are suffering arbitrary detention and ill-treatment in the area.

The statement was made on Tuesday by the Chinese delegation to the UN Human Rights Council in Geneva in response to comments by Bachelet claiming an independent investigation needs to be conducted into claims of human rights violations against Uighur Muslims.

The Chinese authorities offered to facilitate a visit from the high commissioner to Xinjiang but warned that the trip must be about providing “cooperation,” and not be part of a “so-called investigation based on guilty before proven.”

The Chinese delegate said: “The door to Xinjiang is always open, and we welcome the high commissioner to visit Xinjiang.”

China has faced criticism from international bodies, including the UN, over allegations of its mistreatment of Muslim Uighurs across the country, with suggestions that the religious group is being targeted and faces restrictions on its civil and political freedoms.

Bachelet’s remarks on Friday pointed towards reports of arbitrary detention, ill-treatment and forced labor of Uighurs, citing “information that is in the public domain.” She called for an “independent and comprehensive assessment” of the situation in the region.

This is the second time that China has publicly offered an invitation to the UN high commissioner. In June 2019, Chen Xu, China’s ambassador to Geneva, said that Bachelet would be welcome to “pay a visit to China, including a trip to Xinjiang, to see [for] herself.” However, no such trip has taken place to date.

In the last week of February, China’s Foreign Ministry has hit out at the UK, lamenting its use of the UN Human Rights Council (UNHRC) to “spread false information” after London accused Beijing of systematically violating the human rights of minority groups.

“Britain’s so-called adoption of a resolution on this issue is obviously an ulterior motive. Its purpose is to confuse and discredit China… We firmly oppose this. The British tricks cannot deceive the international community,” Chinese Foreign Ministry spokesperson Wang Wenbin told reporters in February.

Wang sought to highlight Britain’s “double standards” on human rights issues, claiming that one-third of families with children under-5 in the UK live in poverty. “British troops indiscriminately killed and tortured innocents in Iraq, Afghanistan and other places, but the perpetrators were sheltered by the British government and remained at large,” the spokesperson added.

Wang said China urges the UK to look at its own human rights situation and take concrete actions, adding that it should adopt a more constructive approach for the healthy development of international human rights.

The spokesperson claimed that xenophobia and hate speech are rampant in the UK and that the rights of immigrants are seriously violated, a line China has increasingly adopted since Britain offered millions of Hongkongers the chance to settle and obtain full British citizenship from February 2021.

Raab cited human rights violations in Tibet, Xinjiang and Hong Kong, insisting that the UK will continue to hold China to account and requesting unfettered access to Xinjiang where Uighur Muslims are allegedly being persecuted.

Beijing denies the allegations made against China.

China has called on the British people to “make independent judgments based on facts,” as a poll shows Brits are suspicious of China after London and Beijing engaged in a tit-for-tat ban on each other’s media organizations.

“China hopes that foreign people, including the British people, can keep their eyes open and distinguish right from wrong, as well as make independent judgments based on facts,” Hua stated.

Hua blasted media organizations she said had “concocted and spread too many rumors, lies and false information on China-related issues,” noting that such practices are not conducive to a “correct understanding” of the Chinese and British peoples.

The spokeswoman took the opportunity to remind journalists of the “importance of true and objective reporting,” and said the media should play an “active and constructive role” in improving cultural understanding between the two nations.

The poll in question revealed that Britons are highly suspicious of the Chinese state, showing that 41 percent of the respondents regarded China as a “critical threat,” and only 22 percent of participants were happy to see any economic agreement between Britain and China.

In early February, the two powers exchanged blows, when as London banned China’s CGTN network from broadcasting in the UK and Beijing took reciprocal action, banning BBC World News from airing in China, despite the BBC not actually having been widely available to the Chinese.

The UK’s Ofcom watchdog pulled CGTN’s license after an investigation showed the broadcaster was “controlled by the Chinese Communist Party and therefore disqualified from holding a broadcast licence under UK laws”.