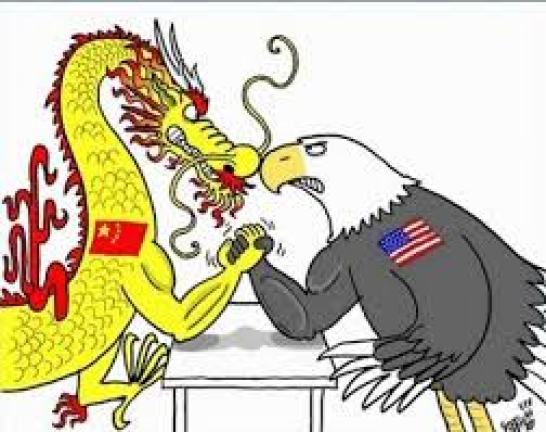 It is well accepted all over the world that during the last one decade or so, the world economy has been primarily driven by the industrial and economic growth in China, which is more than any other individual country. China’s share of world output has gone up from 6.3% in 1996 to 17.8% in 2016.

China is the world’s 3rd largest country after Russia and Canada.  China is only 15% of the global economy but contributes 25 to 30% to global growth.  China’s installed capacity and production of steel, aluminum, coal, power and most of the chemical products have increased by leaps and bounds in the last ten years. China is the largest single consuming country in the world for chemicals. Its share in the global chemical consumption is now around   – 30%.

Of the global annual production of around 58 million tonnes of aluminum, China’s share is around  32 million tonne. Chinese manufacturers continue to augment production capacities in the North-Western provinces at a lower cost. This is expected to increase global aluminum supply in the coming years.

Reflecting China’s growing focus on the production of higher-value goods, the output of computers, telecommunications equipment, and other electronics rose 12.1 percent on the year.

In the process, China’s thrust on export has created problems for the other countries, as Chinese prices have been much less than the price quoted by producers in other countries, leading to falling in production or industrial plant closures in several countries including USA and India.

China has repeatedly been accused by several countries of artificially keeping the price of the Chinese products low to compete in the world market, by providing soft cushions for the  Chinese industries by way of concessions, unsustainable state subsidized production practices, soft loans, etc. Also, Chinese industries have been criticized for not observing the required environmental norms and violating the safety issues for the sake of boosting the capacity build up and production.

However, in the last few years,  China has realized the need to ensure the optimal performance of the industry, by imposing strict environmental rules and stipulating norms for consumption of raw material and utility and enforcing the closure of unviable units. Several units have also been forced to shift from hazardous location to industrial parks. China could take such corrective steps boldly, since it has built so much of overcapacity, with the units operating at low capacity utilization level in the last few years. And therefore, closure of some capacities do not result in significant loss to overall production.

According to a survey of a basket of 16 chemicals studied by the European Union of Chamber of Commerce of China, as many as eleven face low capacity utilization issues in China.

A few examples of plant closures in the past.

While the growth rate in China has slowed in 2017 compared to 2016, these growth rates remain higher than in any other country in the world.

China’s total debt has been building up in the economy during the last several years to support growth. China’s debt surpassed 300% of GDP in 2017.

The People’s Bank of China has enabled the buildup of debt with “huge lending” to commercial banks. Debt-fueled consumer demand accounted for 71% of China’s economic growth in the first three quarters of 2016. China’s economic growth is being held up through extremely high credit generation, that is not sustainable for long without substantial damage to the economy and financial system

In such difficult scenario, China’s product offerings have to shift from mid to high end in the value chain based on innovation-driven development to remain globally competitive without price slashing in the coming years. China has to upgrade its manufacturing sector and take market share from high tech countries such as Japan, South Korea, USA and Europe for higher-end products. Obviously, to achieve such requirements, China’s export market has to be sustained, and its global market penetration has to be enhanced.

In such scenario, any fall in Chinese export due to trade war can cause a huge setback to China’s plans and strategies.

Overcapacity in industrial enterprises is the biggest problem that China is facing today.

China now has far more capacity than it – or for that matter, the world – needs. In some cases, overcapacity eexiststo the level of 30% of domestic need.

Overcapacity has been built up not only by domestic private Chinese companies but also by foreign companies, who target both Chinese and global market.

The overcapacity problem has been exacerbated in recent times by the clear slowdown of China’s economy. Particularly,  impactful is the slowdown in infrastructure projects and the real estate sectors. Overcapacity in the manufacturing sector could take far longer to be sorted out, especially given the state of the global economy

To tackle such conditions and avoid an impending crisis, China faces the compulsive need to boost export, as it’s domestic demand cannot absorb the production at higher capacity utilization level that is needed to sustain the economy.

Trade attack by the USA

US President Trump announced at least $50 billion worth of annual tariffs and other penalties on China, due to what US terms as  “China’s theft of technology and trade secrets,” which  US administration officials say has robbed American companies of billions of dollars in revenue and killed thousands of jobs.

The measures of US government are targeted at imported Chinese goods in as many as 100 categories — hitting everything from shoes and clothing to consumer electronics — and will impose restrictions on Chinese investments in the United States.

President Trump says that he has instructed the Treasury Department to pursue restrictions on certain types of Chinese investments to counter China’s ambitious industrial policy, which aims to dominate cutting-edge sectors like artificial intelligence and mobile technology.

The announcement comes hard on the heels of Mr. Trump’s tariffs on steel and aluminum imports and is aimed at combating a flood of cheap metals into the United States, including Chinese steel.

What about the vulnerability of the USA and other countries?

In China, 31% of the ownership of industrial and production enterprises is by foreign companies, and 21% is owned by state-owned enterprises and the remaining 48% by domestic private sector.

Billions of dollars are being invested by foreign companies in China year after year.

In the year 2016 alone, following investment have been made

Almost every major multinational company in the world have an investment in China. For example, BASF, multinational giant, has invested approximately €6 billion and above €8 billion with partners in China during the last 20 years.

Any fall in economy or trade of China will adversely impact the performance and profit of foreign companies operating in China, most of which are multinational companies based in USA, Japan, South Korea, Western Europe and Middle East region. Given their huge investment in China, any problems faced by them in China will , directly and indirectly,impact the economy of the developed countries where these multinational companies are based.

U S President Trump believes that the imposition of tariffs will safeguard American jobs, but many economists say the impact of price increases for users of steel and aluminum, such as the auto and oil industries, will destroy more jobs in the USA than curbs on imports create. Further, the effect of the China tariffs imposed by the USA would have a bigger impact on United States consumers, who are heavy purchasers of electronics, clothing and other Chinese products.

China has argued that both USA and China benefit from the flow of Chinese money into the United States.

Why the US think trade war necessary?

Though US President claims that US has imposed a steep tariff on Chinese goods to protect US economy., this may not be entirely true. It has to be noted that he has not imposed similar tariffs on other European countries and India so far, though these regions also have a substantial share in US imports. Obviously, the focus of  US is on hurting China.

China, in recent years, has shown expansionist tendency with its aggressive postures in the South China Sea, Senkaku island, threatening India with border war and claiming India’s Arunachal Pradesh as its own and several other claims. China’s aggressive takeover of Tibet is a classic example of China’s territorial expansion targets.

Last year, military spending in China was budgeted to increase by 7 percent, to 1.044 trillion yuan ($164.60 billion) about one-quarter of the proposed U.S. defense spending for the year, which is obviously to support China’s warlike posture towards its neighbors.

Apart from territorial expansion ambition, China has also been focusing on economic domination of the world. It has considerably penetrated into the economy of weaker neighbors such as Pakistan, Bangladesh, Sri Lanka, Mauritius, Myanmar, and others.

Key infrastructure projects across Asia, Africa And Europe under Belt and Road (BRI), are aimed at extending China’s global influence by its economic prowess. BRI is interwoven with official efforts to export Chinese rail, hydropower and other technology and steel, aluminum and other industrial goods. Around $1.8 trillion of infrastructure investments across Asia, Africa, and the Middle East include Chinese money or other involvement.

Obviously, the USA and several other countries are concerned about China’s aggressive approach and are of the view that China has to be checked to avoid it becoming an aggressive superpower, perhaps, even stronger than the USA.

While military warfare with China is ruled out, the only option left for the USA is to impose check and control on China by starting a trade war.

China says that it does not want a trade war with the United States, but it will defend its interests if the US would choose to launch a trade war.

However, it is extremely doubtful as to whether China can sustain a trade war since Chinese economy will virtually collapse if the export of Chinese products would be considerably curbed.

It remains to be seen as to what would be President Trump’s further strategies and whether the US would ask it’s also allied to join in the trade war against China. While the allies may not go to the full extent of supporting the USA, nevertheless, they are watching with sustained interest the moves of President Trump and perhaps, want US President to succeed.