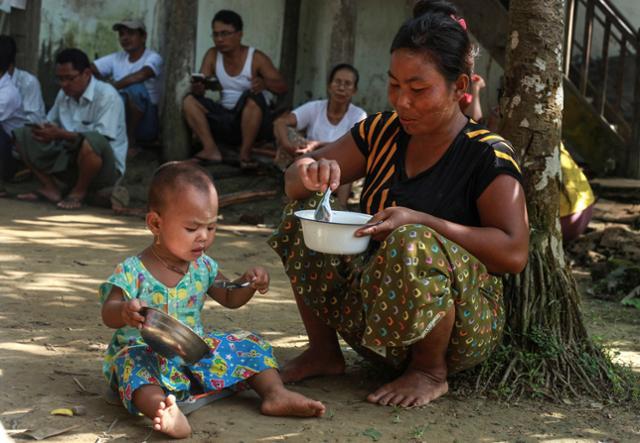 The Burmese government and army should urgently ensure humanitarian aid can reach ethnic Rohingya and other vulnerable populations in northern Rakhine State, Human Rights Watch said today. Government security operations have cut off assistance to tens of thousands of people and forced many to flee their homes.

The United Nations and donor governments should publicly call on the Burmese government to ensure aid organizations can reach those in need.

“Recent violence in northern Rakhine State has led the army to deny access to aid agencies that provide essential health care and food to people at grave risk,” said Brad Adams, Asia director. “The Rohingya and others have been especially vulnerable since the ethnic cleansing campaign in 2012, and many rely on humanitarian aid to survive.”

On October 9, 2016, armed men attacked three police outposts in Maungdaw township near the border with Bangladesh, killing nine police officers and seizing weapons. The President’s Office blamed a previously unknown Rohingya group called Aqa Mul Mujahidin for the attacks, though other officials have said it is unclear who was responsible.

Rohingya activists have alleged that government forces have committed serious abuses during the current operations, including summary executions and the burning of villages.

Since October 9, authorities have blocked all aid deliveries to Maungdaw township and aid agencies have not been able to conduct a needs assessment. “We have asked [for access] from township level to Union level,” a World Food Programme (WFP) partnerships officer said. “The official explanation [for being denied access] is that security operations are ongoing.”

Under international law, authorities may restrict freedom of movement for specific security reasons for a limited period of time, but broad and open-ended restrictions are not permissible. Under the UN Guiding Principles on Internal Displacement, all authorities “shall grant and facilitate the free passage of humanitarian assistance and grant persons engaged in the provision of such assistance rapid and unimpeded access to the internally displaced.”

WFP told Human Rights Watch that while the government has recently permitted the resumption of food assistance to 37,000 people in Buthiduang township, 50,000 people remain without food aid in Maungdaw.

Humanitarian organizations said the violence has displaced some 3,000 ethnic Rakhine people and as many as 15,000 Rohingya, but the lack of access prevents an accurate count.

Rohingya constitute approximately a third of Rakhine State’s population of over three million people. The Muslim minority has long suffered from discrimination and a host of serious human rights violations, including restrictions on the rights to freedom of movement, access to health care, and education. Successive Burmese governments have effectively denied Rohingya citizenship under Burma’s discriminatory 1982 Citizenship Law.

The fighting has also increased tension in the camps for the nearly 120,000 displaced Rohingya near the town of Sittwe in Rakhine State. These people fled their homes after communal violence in 2012, which left large numbers of people dead and entire villages destroyed.

“The Burmese government has a responsibility to search for and arrest those who attacked the border posts,” Adams said. “But it is required to do so in a manner that respects human rights, ensures that the area’s people get the aid they need, and allows journalists and rights monitors into the area.”

[This article was published in www.hrw.org]