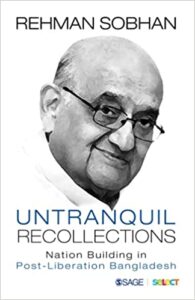 by Rehman Sobhan, Sage Publications India Pvt Ltd, Delhi, Paperback, 348 pp, Amazon $20. ISBN:978-93-5388-739-1
By Arnold Zeitlin     13 March 2022
Early in this second volume of his memoirs, Rehman Sobhan, a distinguished economist whose lifetime spans the story of Bangladesh independence, laments the state of history writing in Bangladesh. Referring to the period from Bangladesh independence the end of 1971 to the murder of Sheikh Mujibur Rahman and its aftermath in 1975, he writes, “Strangely, very little research has been invested in this formative phase of Bangladesh’s history. He adds, referring to the leaders of independence who were slain in post-independence coups:
“Unfortunately, their lives and the history of that period have been entrapped in contemporary political debates where contested parties have preferred to depict our nation builders in hues of white and black depending on the narrator….
“Large segments of Bangladesh’s history….were covered up so that the then historical narrative moved forward with significant unexplained gaps….The writing of history for our students was similarly distorted so that Bangladesh faced the risk of rearing a generation with no clear knowledge of our past.”
Sobhan then proceeds to produce his own, invaluable if limited version of events of that period. He writes from a narrow but extremely authoritative scope as a member of the new country’s Planning Commission and as a young economist set on bringing socialism to Bangladesh. He had frequent access to Sheikh Mujib for whom his admiration seems boundless. He refers to Mujib throughout his account only as Bangabandhu (friend of Bengal), the affectionate nickname his supporters have dubbed upon him.
He recognizes what the decades-long rivalry between Sheik Hasina, Mujib’s daughter and current prime minister, and Begum Zia, a past prime minister and widow of the assassinated Major General Ziaur Rahman, has done to the composition of Bangladesh history.
“Unfortunately,” Sobhan writes wryly, “where our history provides one of the major fault lines dividing two major political parties, the process of setting the record straight has also been exposed to some overcompensation”
Sobhan writes of Mujib so dominant that once he made a decision, no one dared debate it. Mujib often went over the head of his ministers, weakening their authority to the point they were disinclined to make decisions, a state that forced Mujib to create his own secretariat He writes of inertia intensifying. Mujib and the senior officials around him, Sobhan points out as an example of what did not get done, “had no problem in sharing broad philosophical commitment to socialism, self-reliance and austerity. It was only when the general was concretized into the specifics of policy action that they discovered a variety of considerations dictated, as they said, by pragmatism rather than ideology, to shelve these proposals.”
The failure of Bangladesh to embrace a socialist economy is one of Sobhan’s greatest disappointments. The effort to create a socialist society created one of the bitterest controversies in the post-liberation years. But Sobhan points out that 44 percent of the non-agricultural economy was already in public hands or control at independence because so many non-Bengali entrepreneurs had walked away from their enterprises to flee to West Pakistan.
His disappointment intensified after a journey seeking aid on a fraternal socialist basis from the then-satellite states of the Soviet Russian empire. Poland, Hungary, Romania and Bulgaria.
“I came across few, if any references to socialist solidarity,” Sobhan writes. “….In this world, I found no socialists and my idealistic attempts to invoke notions of socialist fraternity in negotiating terms were contemptuously disregarded…It was virtually impossible….to find anyone, apart from leaders of the Communist Party, who was at all inclined to discuss the issue of socialism as it applied to their country or as a general concept.”
He was also unhappy when a frustrated Mujib the end of 1974 imposed a state of emergency that became a one-party state known as BAKSAL. “Some of us feared,” he writes, “…the concern that Bangabandhu’s move away from the democratic path may be used against him by those who sought to eliminate him….” Elimination was precisely what happened. Mujib and most of his family were murdered on August 15, 1975, plunging Bangladesh into 16 years of the sort of military rule that Bengalis thought they had left behind when they separated from Pakistan.
Sobhan defends the work of the Planning Commision in trying to lift Bangladesh from the debris of the liberation war but what is missing in this memoir is a more objective version of the state of the country that drove Mujib to near dictatorship.
In addition to his close relationship with Mujib, Sobhan also had dealings with Ziaur Rahman, who eventually succeeded Mujib as president of Bangladesh. He first met Rahman in Kolkata in July 1971 and found him “reticent”. Rahman kept in touch with Sobhan during his time at the planning commission. They traded dinner engagements at their residences.
“What was remarkable about Zia from all those earlier encounters,” writes Sobhan, “was that unlike the average Bangladeshi who prefers to talk more than to listen, he was then more anxious to hear what others had to say rather than articulate his own views. This character trait apparently changed after he became the president of Bangladesh.”
Not only does Sobhan look back at the Bangladesh he served until 1975, he looks critically at what Bangladesh has become under the rule of Mujib’s daughter.
The day Mujib was killed, he writes, “Bangladesh set its course towards building a society of privilege through the patronage of an elite class whose aspirations had once been frustrated by Bangabandhu…
“….Sheik Hasina , as the PM of Bangladesh for the past 12 years, is in a position to move forward without ambiguity in her declarations and contradictions in her actions. The society which prevails in Bangladesh today may be consistent neither with Bangabandhu’s vision nor with my own….It is for the present generation to now decide whether they are comfortable with trading off democracy and social justice for a past-growing unequal society, and how far they are willing to distance themselves from the long-forgotten vision of Bangabandhu.”